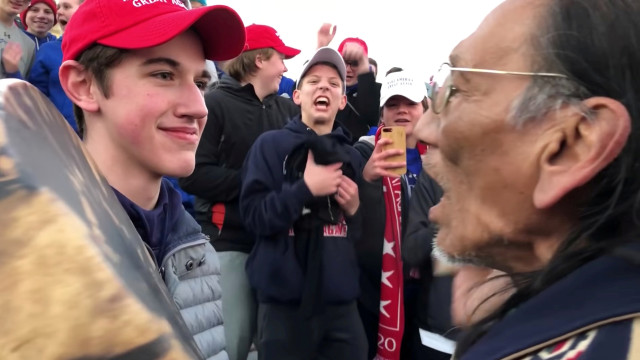 One of the most left-leaning publications in modern journalism, the Washington Post, has finally come to terms with Covington Catholic student Nicholas Sandmann and settled the defamation lawsuit he brought against them after they provided biased coverage of a 2019 misleading video clip.

Sandmann, 18, was thrust into the awful limelight of the Internet after a clip of him getting into an altercation with a Native American man went viral. The young man announced that his lawsuit against WaPo had been officially settled.

Here’s more detail on this from from The Washington Examiner:

“On 2/19/19, I filed $250M defamation lawsuit against Washington Post. Today, I turned 18 & WaPo settled my lawsuit. Thanks to [Todd McMurtry] & [Lin Wood] for their advocacy. Thanks to my family & millions of you who have stood your ground by supporting me. I still have more to do,” he shared on Twitter. “We have settled with WAPO and CNN. The fight isn’t over. 2 down. 6 to go. Don’t hold your breath [Twitter CEO Jack Dorsey].”

“We are pleased that we have been able to reach a mutually agreeable resolution of the remaining claims in this lawsuit,” Kris Coratti, a spokeswoman for the Washington Post, told the Washington Examiner.

Judge William Bertelsman of the U.S. District Court in Eastern Kentucky and who initially dismissed the case in late July 2019 on the grounds that the paper’s reporting was protected by the First Amendment, reinstated the case in October. But the judge narrowed the number of allegedly defamatory statements from 33 to three.

The mainstream media is absolutely desperate to take anything and everything possible and manipulate it into a narrative they can use to paint up President Trump and those who support him as radical racists with an agenda of hate.

Nothing could be farther from the truth. In fact, what most of Trump’s supporters and the president himself want is more freedom and equality for everyone under the law. All individuals should be treated equally, and that means no one is allowed to get away with breaking the law, including illegal immigrants and others.

It’s a major victory for the right to see the media admit they do biased coverage and shape narratives that are false in order to push a specific agenda. Here’s to hoping we see more of this in the future.