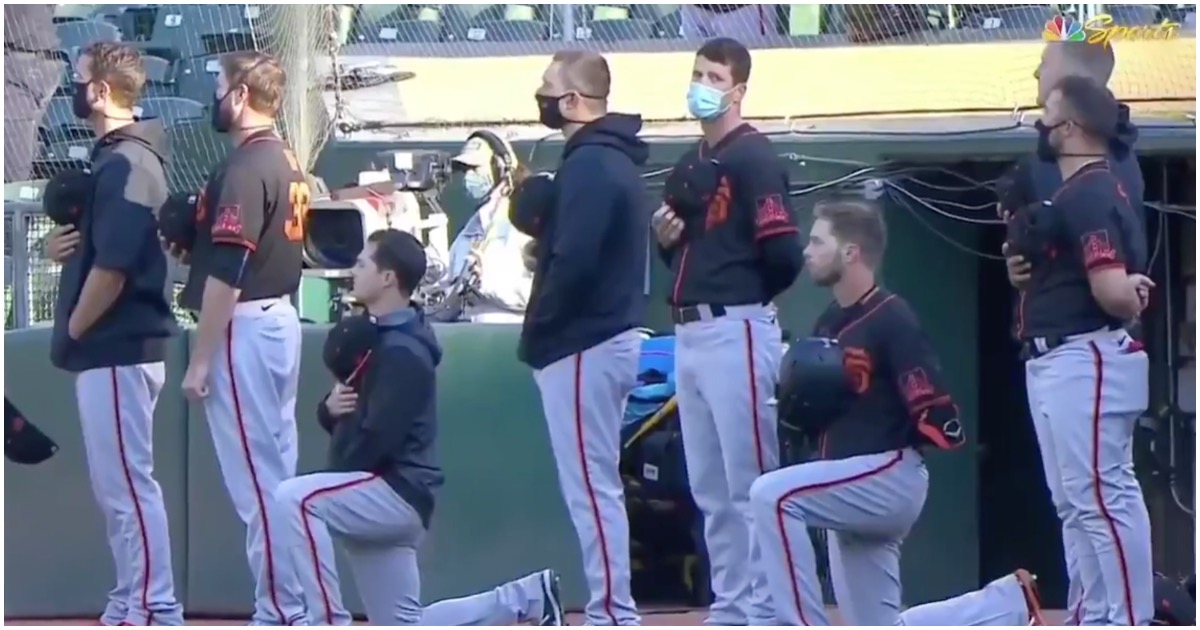 If you’re a Los Angeles Dodgers fans, you didn’t need another reason to hate the San Francisco Giants. And yet, on Monday, they gave you another one – if you’re a proud American.

Manager Gabe Kapler and multiple Giants players decided to kneel for the national anthem before their afternoon game.

Manager Gabe Kapler, first base coach Antoan Richardson and outfielders Jaylin Davis, Mike Yastrzemski and Austin Slater were among the San Francisco Giants who knelt during the playing of the national anthem ahead of Monday’s exhibition game against the Oakland A’s.

Members of the Giants team took a knee on the same Coliseum field where former Oakland A’s catcher Bruce Maxwell became the first MLB player to kneel during the national anthem to protest racial injustice on September 23, 2017.

A bunch of Giants players and coaches kneeled for the anthem. Brandon Crawford put his hands on the shoulders of Jaylin Davis and Antoan Richardson: pic.twitter.com/2XsIg8oFjw

If you thought kneeling during the National Anthem was a problem a year or two ago for the NFL, just wait until the upcoming season kicks off. Taking a knee is going to be the cool thing to do.

A number of players have already stated that they will kneel, including Cleveland Browns quarterback Baker Mayfield.

But what if coaches start kneeling? Wouldn’t that set a poor example for their squads?

Carolina Panthers head coach Matt Rhule said in a video conference with reporters on Thursday that he is considering joining his players and taking a knee.

LeBron James and many other athletes went after NFL legend Drew Brees, all because the star quarterback had the audacity to claim that he doesn’t “agree with anybody disrespecting the flag of the United States of America or our country.”

Highlight: @readdanwrite asks @drewbrees what the star NFL quarterback thinks about "players kneeling again when the NFL season starts."@drewbrees: “I will never agree with anybody disrespecting the flag of the United States of America or our country.”

Words to unite.. A mentor of mine once told me that if you listen closely, the sound of children playing is the same no matter where you are in the world. The laughing, shouting, screaming, giggling… No matter what language you speak, no matter what your race, color, religion… the exact same. At some point we all change… The reasons… Our environment, experiences, education…The voices and influences around us. If you are reading this, you are probably one of those whose voice and influence is very powerful in the life of a young person. So when you ask what difference you can make in this world… It’s exactly that. Raise, teach, but most importantly model to young people what it is to love all and respect all. There is a saying in every locker room I have been in… Don’t just talk about it, be about it. Acknowledge the problem, and accept the fact that we all have a responsibility to make it better. “Your actions speak so loudly I can’t hear what you’re saying”

I recorded a few videos when thinking of how to respond to Drew Brees, I don’t take any of it back-I meant what I said-I removed the 1st video because I knew it be more about the headlines. I want people to understand how those of us struggling with what’s going on feel pic.twitter.com/T054qt0YEz

In 2010 Drew Brees won ‘Sportsman of the Year’ for his work to help rebuild New Orleans, a city that is over 65% black, after Hurricane Katrina

how Drew Brees O-Line protecting him next season

. Is it still surprising at this point. Sure isn’t! You literally still don’t understand why Kap was kneeling on one knee?? Has absolute nothing to do with the disrespect of

and our soldiers(men and women) who keep our land free. My father-in-law was one of those https://t.co/pvUWPmh4s8

men who fought as well for this country. I asked him question about it and thank him all the time for his commitement. He never found Kap peaceful protest offensive because he and I both know what’s right is right and what’s wrong is wrong! God bless you.

Growing up in the Bay Area in the 80’s, I was a Giants fan. Up until the roid era.

With this.. further proof I’ll never provide another cent nor time to MLB.

As for Brees.. the dude walked back his tweet whereas he & his wife are total wokesters now.

Baseball is now dead to me . I agree that there is racism in America and it’s against every race , to different degrees , but I don’t agree with this kneeling during the National Anthem .