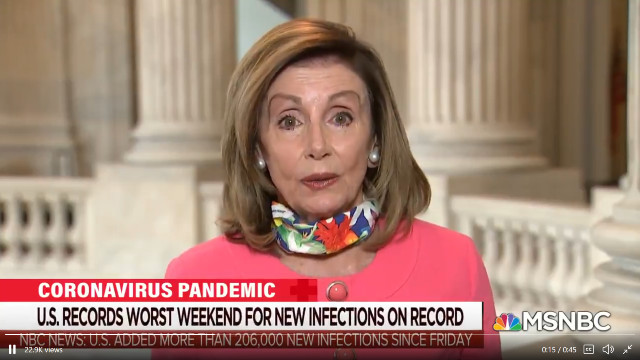 The following article, Speaker Nancy Pelosi Says President Trump Might Have To Be ‘Fumigated’ Out Of White House, was first published on Flag And Cross.

Speaker of the House Nancy Pelosi is once again stoking unsubstantiated fears about President Trump not leaving the White House if he loses the presidential election later this year, going so far as to say he should be prepared to be “fumigated” out.

That’s a pretty strong statement and sort of smacks as a threat, don’t you think? Not becoming of someone in her position to be saying something like that against the commander-in-chief, no matter how much she might disagree with him.

Pelosi made her comments on the Monday edition of MSNBC’s Morning Joe program.

“Whether he knows it yet or not, he will be leaving,” Pelosi said Monday on MSNBC’s Morning Joe. “Just because he might not want to move out of the White House doesn’t mean we wont have an inauguration ceremony to inaugurate the duly elected president of the United States.”

Pelosi insisted there is a concrete system for the presidency that must be respected and noted that she is second in line for the highest office.

“I’m second in line to the presidency and just last week, i had my regular continuation of government briefing,” Pelosi said. “This might interest you because as I say to them, this is never going to happen, God willing it never will but there is a process. It has nothing to do with if a certain occupant of the White House doesn’t feel like moving and has to be fumigated out of there because the presidency is the presidency. It’s not geography or location.”

“Whether he knows it yet or not, he will be leaving,” Speaker Pelosi says after President Trump suggests the possibility of not accepting the election results. pic.twitter.com/Xu1PiyfaV3

There’s been nothing that has been done by Trump or those in his administration to suggest that if he loses he’d fight it and stay in office, refusing to vacate the White House. Pelosi even bringing that up is nothing but fear mongering to stir up the already unhinged individuals on the left in this country.

They create narratives designed to make these folks hate Trump as much as possible, hoping the motivation will help voters show up to the polls in November.

Continue reading: Speaker Nancy Pelosi Says President Trump Might Have To Be ‘Fumigated’ Out Of White House ...

She is pure evil. Another one of her “smear “ tactics that she is so proud of. She needs to remember that it is her party that has never accepted the last election results. May her district vote her out of office.

That’s if he loses!