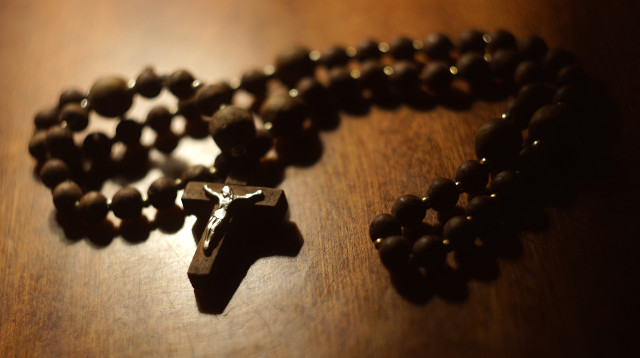 The following article, Catholic Church That Has Connections To Knights Of Columbus Defaced By Satanic Symbols, was first published on Flag And Cross.

A Catholic church located in the city of New Haven, Connecticut found itself the victim of blasphemous vandalism on Thursday morning, the facility having been defaced with satanic symbols.

The church is the home of the congregation of St. Mary’s, which has a lot of history concerning the Knights of Columbus group. The organization was established at the church years ago.The church’s pastor, John Paul Walker, stated that the building was vandalized sometime between 9 p.m. and 6 a.m.

In a Facebook post, Walker said that “words and various symbols including a satantic one were painted on the outside doors of the church.”

“I would ask everyone in the parish to pray to Our Lord in reparation for this sacrilege, and to St. Michael for protection against all the powers of hell,” he said. “Please pray, too, for the perpetrator of this action, who is clearly a very disturbed individual in need of serious help.”

The actual building that was vandalized, St. Joseph’s, has been St. Mary’s temporary home since 2019 when the parish undertook a major renovation project in the main church. The Knights were founded in Saint Mary’s basement in 1881 to combat anti-Catholicism in the United States. Over the years, the parish has endured a series on attacks, and throughout much of its early history it was referred to as a “blemish” on New Haven’s otherwise non-Catholic population, according to the organization’s institutional history.

The vandalism done at St. Mary’s is the latest in a rash of anti-Catholic attacks in the past week. On Saturday, a man in Ocala, Florida, set fire to a church while people were preparing for mass within. He later told police that he did it because of his serious disagreements with Catholicism and that he was on a “mission.” In both New York City and Boston, which have large Catholic populations, statues of the Blessed Virgin Mary were defaced, and in the case of the one in Boston, set on fire.

So much for all of the tolerance we hear so much about from the radical left, huh? There’s no doubt this kind of behavior has been inspired, to some degree, by the rioting, looting, and vandalism pushed by the Black Lives Matter movement and allowed to continue on in major cities by the inaction of Democratic leaders.

This sort of behavior is beyond unacceptable. No one should have their place of worship desecrated by miscreants like this. Here’s to hoping the individuals responsible are caught and held accountable for their actions.

Continue reading: Catholic Church That Has Connections To Knights Of Columbus Defaced By Satanic Symbols ...

Imagine that, “StoryWarrant” has discovered the long known relationship between the Catholic Church and the Knights of Columbus. Welcome to the reality of the known world!

Remember America, removing religion (I’m not very religious) from America is on the to-do list of the communist to take over our country. Therefore we must protect the American churches & religions.