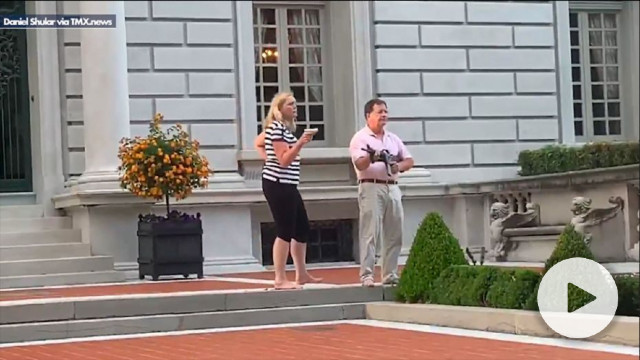 A couple in Missouri is finding themselves a viral sensation after video was posted online of them confronting protesters who broke into their gated community — which is private property, thus making these individuals trespassers — however, if you want the truth of what happened during the entire ordeal, you probably aren’t getting the whole story from ABC or NBC news programs.

The couple stated that the group of protesters broke down the gate and gained entrance into the community located on a private street in the city of St. Louis. They said they grabbed their weapons when they noticed “multiple” people in the group were armed, according to department records.

Al Watkins, an attorney for Mark McCloskey, 63, and his 61-year-old wife, Patricia, said the protest was largely peaceful and the pair did not bring their guns outside of the home until two men in particular, both of whom were white, started menacing them.

“When reporting on the incident Monday night, ABC and NBC intentionally hid those facts as they insisted the mob was just made up of “peaceful protesters,” and demonized the couple for protecting their home and lives with guns,” Media Research Center news analyst Nicholas Fondacaro wrote of Monday’s newscasts.

Fondacaro noted that “NBC Nightly News” began the segment with anchor Lester Holt reporting that Trump re-tweeted “an inflammatory video made during a protest” in St. Louis.

“Moments later, NBC White House correspondent Kristen Welker claimed, without evidence, that Trump was trying to stoke ‘racial’ ‘tensions’ with the video,” Fondacaro wrote in his piece. He also added that Welker called the protestors “peaceful.”

It seems that ABC’s “World News Tonight” didn’t do much better at properly handling the facts of this story. That’s probably not a very big shock to those of us who recognize that mainstream media outlets are basically just Democratic Party propaganda machines.

“Chief White House correspondent Jon Karl also insisted Trump’s retweet was a way to ‘rally his base with racially incendiary rhetoric,’” Fondacaro noted in his analysis. “And absent of any context, Karl reported that the video was of ‘a white couple in St. Louis pointing guns at black protesters walking by on a street in front of their home.’”

The analyst noted that Karl made no effort to inform viewers watching the program that the mob, which contained a mix of races, had trespassed onto private property. That’s a pretty important detail to leave out.

Thankfully, while these two outlets didn’t cover all of the facts, a number of others did.

If you still don’t see the media as being biased and all about pushing an agenda, you’re not living in reality.

ABC and NBC don’t want to print or report all the facts. This is why we cannot trust their reporting of the news. The MSM is the Democratic Party’s propaganda machine and that is a fact.

Disturbing that other Americans were not there standing with the couple as they were protecting themselves & their home from the criminals causing the problem. Better defend our 2nd amendment or all America will be over run by these criminals.