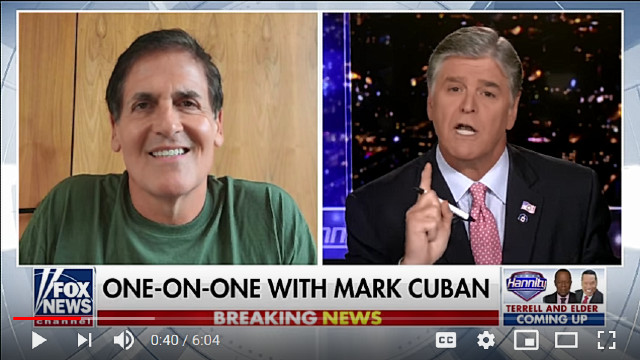 The following article, Billionaire Mark Cuban Believes Biden ‘100%’ Has The ‘Stamina’ To Be President, was first published on Flag And Cross.

Billionaire Mark Cuban, not-so-affectionately known as the “Anti-Trump,” has come out and decided to throw his support for president behind Democratic Party presumptive nominee Joe Biden.

Cuban stated that he believes that Biden is sharp and has the mental faculties to handle responsibilities of being president. Apparently, Cuban hasn’t watched a single interview Biden has conducted over the last year or so. Or maybe he’s just ignoring all of the signs that point to Biden potentially having some sort of dementia.

The Shark Tank star got into a heated exchange with Fox News host Sean Hannity Tuesday evening over whether or not Biden was capable of being president.

“OK, you give me a bumper sticker,” Hannity said in response to the entrepreneur, host of ABC’s investment show Shark Tank and owner of the NBA’s Dallas Mavericks.

“Joe’s been in office 50 years. He was vice president for eight years,” he said, citing Trump signing the First Step Act and an executive order on police reform. “Tell me what Joe has done that you’re proud of that qualifies him to be president after 50 years.”

Joe’s length of time spent in office is exactly the problem. He’s a career politician. We’ve seen the damage those kind of folks are capable of doing to the country, on both sides of the aisle, so why would we want another one?

Trump changed the paradigm when he got elected into office, and frankly, folks won’t want another career guy in there. Things have changed. Cuban can’t seem to accept that.

“We just had two and a half million new jobs and a record retail sales in the history of the country. Donald Trump did that, not Biden in the basement,” Hannity went on to say.

“Sean, it’s like I explained to my kids: When your bank account goes from $10 to $1, and then, all the sudden it goes to $2, you can say you doubled your bank account, but you’re still down 80%,” Cuban replied.

There is plenty of reason to believe that Biden is not mentally fit to serve in the Oval Office. There is also plenty of evidence that his policy platform will kill our liberty and strip away our prosperity, and that Biden can’t handle the responsibility of being a leader.

We’ve already seen the success of Trump in office. We already know he’s going to do what he says he’s going to do, a rare trait among politicians. Why trade that for Biden? Cuban fails to make a compelling case.

Continue reading: Billionaire Mark Cuban Believes Biden ‘100%’ Has The ‘Stamina’ To Be President ...

Billionaire Mark Cuban Believes Biden ‘100%’ Has The ‘Stamina’ To Be President….Wink…WINK!

And he must have believed the same for old hillary; as she had to be carried to and from her political appearances in 2016……