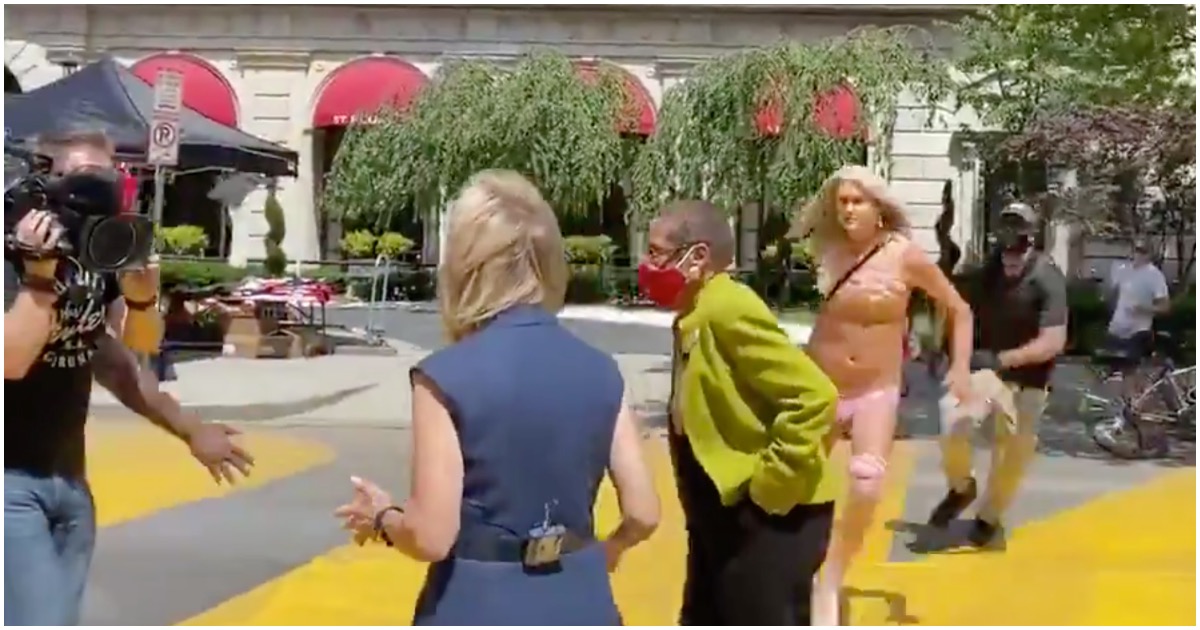 This is the new normal.

The Founding Fathers are rolling in their graves.

The incident was caught on video, and shows the perpetrator being grabbed and pushed away by security as the congresswoman — a non-voting member of the House of Representatives — yells, “Where’s the police when you need them?”

A clip taken by WUSA-TV shows the bikini-wearing demonstrator also asking “where’s the police?” accusing the security personnel of assaulting them.

So, this person in the pink bikini just tried to run into Eleanor Holmes Norton and Andrea Mitchell at Black Lives Matter. He slightly bumped the delegate. Security pushed him off. Police deescalated it from there. (@wusa9) pic.twitter.com/CT1WROV571

This “woke” scum bag shouting at a black cop…

The two women in the video below recognized @Julio_Rosas11 during his protest coverage this evening. They demanded he delete the following video.

I attended dozens of protests outside Rahm's house, he never turned his neighborhood into a police state the way Lightfoot does.

There is a several block perimeter around her house, with tons of CPD vehicles down the streets, barricades & bike squads blocking the allies. pic.twitter.com/PxpNOK8xAI

President Trump has threatened to federally prosecute any vandals

Antifa accounts are promoting this upcoming event to protest @MayorJenny at her home. They want to retaliate against her for saying police will at some point retake the East Precinct after three days of shootings at “CHAZ.” pic.twitter.com/gF2MXUmsZb

A contrast.
the left commits authentic acts of violence for weeks against innocent people- it's called protest.

meanwhile nonexistent crime is blamed on a law abiding and very patient public.

when is it okay for us to call bullshit on this hysteria?

Liberals utopia is falling apart. Loved hearing them ask, “where are the police.” lmao!!!!

That was a male? Thought it was merely a ugly woman……