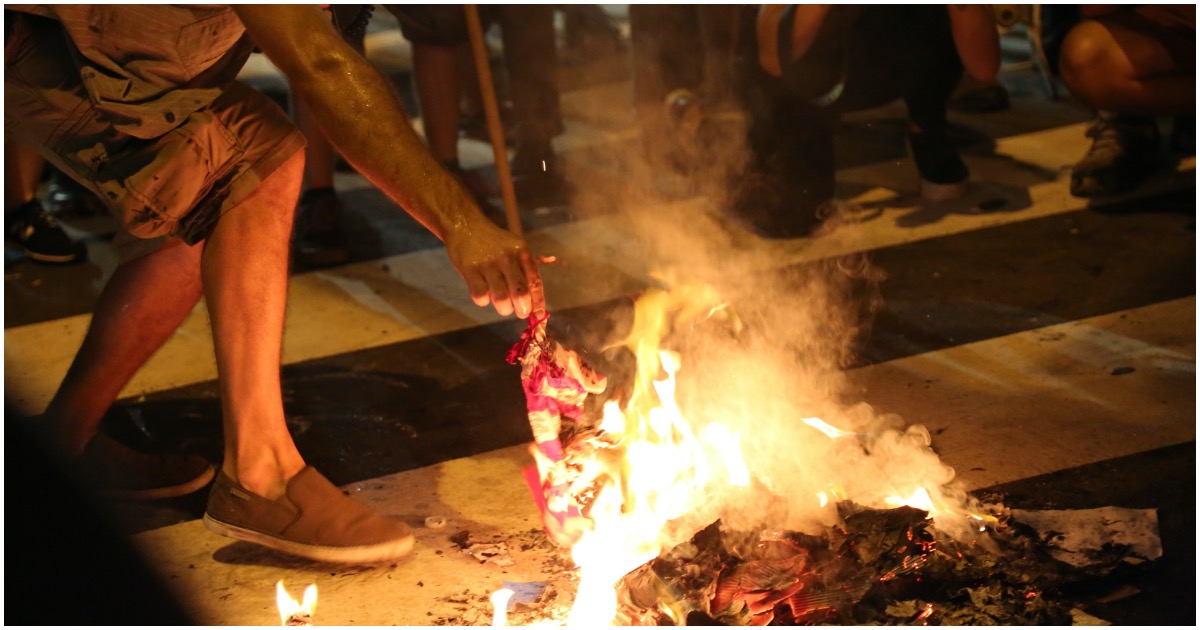 The following article, President Trump: People Who Burn Old Glory Should Go to Jail For A Year, was first published on Flag And Cross.

Half of all Americans (and 11 out of 10 liberals) don’t understand how good they have it in the United States – a country that people still flock to in order to escape the corrupt governments of their home nations.

November is going to be wild!

President Donald Trump said individuals who burn the American flag should have to spend a year in prison during his campaign rally Saturday in Tulsa, Oklahoma.

Trump suggested that Congress take up legislation — that would also require a Constitutional Amendment — to make burning the American flag a criminal act punishable by one year in prison.

Republicans are the party of LIBERTY, EQUALITY and JUSTICE for ALL. We are the Party of Abraham Lincoln and the party of LAW AND ORDER! pic.twitter.com/H6Qnf6J3GB

Tom Petty’s estate announces via tweet that they’ve issued a cease and desist letter to the Trump campaign for using the song “Won’t Back Down” during tonight’s Tulsa Rally, writing, “Tom Petty would never want a song of his to be used for a campaign of hate.” https://t.co/36lfENOrYK

Joe Biden can’t even get 1,000 people to tune in to some of his rallies on YouTube

Which one do you think has an “enthusiasm problem” according to the mainstream media?

Dear @realDonaldTrump & @GOP: Asian Americans make up 11% of the electorate in Nevada; 5.5% in Texas & 4.7% in Georgia, enough to be the margin of victory. Keep saying racist shit like Kung Flu. Your racism is one reason Asian Americans now trend towards Democrats.#TrumpRally https://t.co/Y5vuiFkFd3

Trump is an incumbent who is campaigning with his country in much worse shape than it was four years ago. The disastrous Tulsa rally illustrated how difficult this is going to be for him. He’s got no message.

Just after 1AM, his tie undone, Pres Trump steps off Marine One back at the WH from his rally in Tulsa. By my count, it was his 500th flight aboard Marine One as president. pic.twitter.com/m3fktI39VK

A magnitude 4.2 earthquake shook northern Oklahoma and was felt in parts of Tulsa as protesters filled the city's downtown streets after Pres. Trump's campaign rally. https://t.co/md0IwGedz5

Teenage TikTok users and K-pop fans claimed to have registered potentially hundreds of thousands of tickets for President Trump's campaign rally as a prank to ruin the event. https://t.co/vrbtgSa27T

Continue reading: President Trump: People Who Burn Old Glory Should Go to Jail For A Year ...

I agree with President Trump. Burning the flag is disrespectful and there should be a law to imprison anyone who commits this act of aggression on the symbol of our freedom. If the flag bothers them so much then they should find another country to live in. Maybe if they burn their flag they will be shot on the spot.