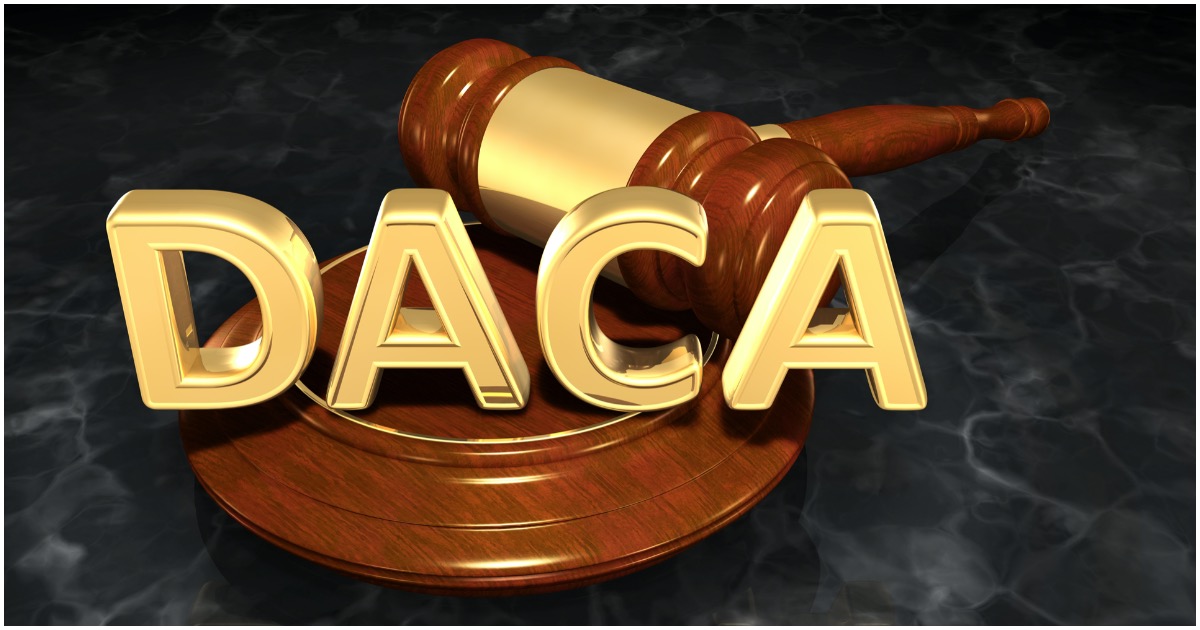 The following article, Illegal From the Start — An Opinion on DACA, was first published on Flag And Cross.

The Deferred Action for Childhood Arrivals, better known as DACA, has been a hot button issue since it’s inception by the pen of one Barrack Obama. The problem with DACA is that it was never legal. Putting aside all of the compassion vs. legal right to be in the United States arguments, DACA was created via Executive Order. At this point in our nation, many have forgotten that the authority to issue EOs are derived from the United States’ Constitution Article II, Section I, where it states, “The executive power shall be vested in a President of the United States of America.” and Article II, Section III where the Framers told us, “he shall take care that the laws be faithfully executed.” If that seems a little vague to you, let me simplify it just a bit. President is the Chief Executive, which means it is his responsibility to oversee the operations of the federal government, like the CEO of any private company. President is expected to use his “power” as CEO of the government to make sure that laws that have been duly passed by Congress – and signed by him or VETO overridden – are upheld in accordance with the limitations that have been placed on the federal government by the Constitution. Okay, so that still sounds a bit convoluted, so let me try that again. President is in charge of the executive branch of the federal government and is expected to use the executive branch to enforce the laws that have been passed by Congress. Is that better?

The point so far being that only Congress writes laws. President has no authority to write legislation. President does have the power to give directives to the various offices of the executive branch, such as the DOJ, IRS, etc. Those directives are Executive Orders. If you’re paying attention to this point, you now know that EOs are only directives from the CEO to their subordinates regarding how they want the job done. There is no power of law for an EO. As an example, the director of the FBI can be removed from their position for failing to follow such a mandate; but anyone who does not work for the executive branch is not compelled to heed those same directions. Here is where I remind you that (according to the Constitution), the director of the FBI serves at the pleasure of President, but President works for the American people. There is, however, one exception to the limitation of the EO. Only if the Congress has passed legislation giving the Executive authority to act on a particular issue does an EO have the power of law. (And just for the record there is still debate among Constitutional scholars as to if Congress can grant the Executive this exemption. But it has become accepted and has been left unchallenged at the SCOTUS level – at least so far.)

When Barack Obama wrote the EO creating the DACA program, he did so out of frustration with Congress due to their inability or unwillingness to move forward legislation on immigration reform. Nearly a year earlier, Obama had told a Spanish-speaking television audience that he did not have the power to make proclamations; he was not a king. But on the day he proclaimed DACA, we were all told that he had a phone and a pen. I bring this up to show you that even Obama acknowledged that it was the role of Congress to make changes to immigration law just a year earlier. He knew that he had no legal authority to institute the DACA program but was later counting on the fact that no one – with “standing” – would challenge the EO’s legality. In Congress – both houses – Democrats cheered him, Republicans rebuked him, and both ignored the Constitution and their jobs. (Remember it’s the job of Congress to make or change law.)

Another well-documented fact about Executive Orders is that if the next person who becomes President doesn’t like a previous EO, they can simply write a new one repealing or replacing it with their own. That is because the EO – if you will remember – is the directive of how the current CEO wants their subordinates to carry out their assigned duties.

President Donald Trump took steps to phase out the DACA program by writing an EO. In Trump’s order, he established a time frame and expressed his desire for Congress to take action on immigration reform within that time frame. Trump was trying to re-establish the rule of law in two ways: eliminate an unconstitutional EO and have Congress fulfill its responsibilities as law-makers. Instead, he was accused of being a racist, and Congress postured rather than go to work on the issue.

Part of the posturing that we saw from activist leftists was a legal challenge to Trump’s EO to end the DACA program. After this challenge had made it’s way to the SCOTUS, the ruling of the court was rendered on Thursday, June 18th, 2020. Chief Justice John Roberts joined the four leftist judges ruled that Trump’s decision to rescind DACA violated the Administrative Procedure Act saying that Trump’s effort was “arbitrary and capricious.” In a very narrow look at the issue, the court wrote, “the agency failed to consider the conspicuous issues of whether to retain forbearance and what if anything to do about the hardship to DACA recipients” while refusing to rule on the legality of DACA itself. Justices Clarence Thomas, Samuel Alito, and Neil Gorsuch did acknowledge that DACA was illegal from its inception in their dissent, but given the refusal of the leftist justices to ask that most basic question, the Constitution and Common Sense both lost the day.

In the simplest terms, the SCOTUS has told President Trump that he does not have the same authorities that all previous Presidents have had. They have said to all of America that we should accept EOs as if they too are laws. They have told Trump that he can’t clean up Obama’s mess because it will be a mess to clean up, even though it is a mess that should have never been created. And possibly worse of all, they have told all of America that we should no longer care about the Constitution because clearly, at least five of the Justices do not.

Tim Tapp grew up in a Democratic household where the values of helping others, loving God and America were taught. Sadly, he learned the hard way that much of what the Democratic party promised and claimed to be their beliefs were little more than pretty words, and often flat-out lies. Having studied biology, he worked in management and QA for restaurants and food manufactures before becoming politically active. Never being one who was afraid to speak up and being armed with the knowledge of the failings of the Democratic party while understanding that most Democratic voters are good-hearted, well-meaning people, he is the host of the syndicated, conservative talk show “Tapp” into the Truth. He calls East Tennessee home.

Continue reading: Illegal From the Start — An Opinion on DACA ...