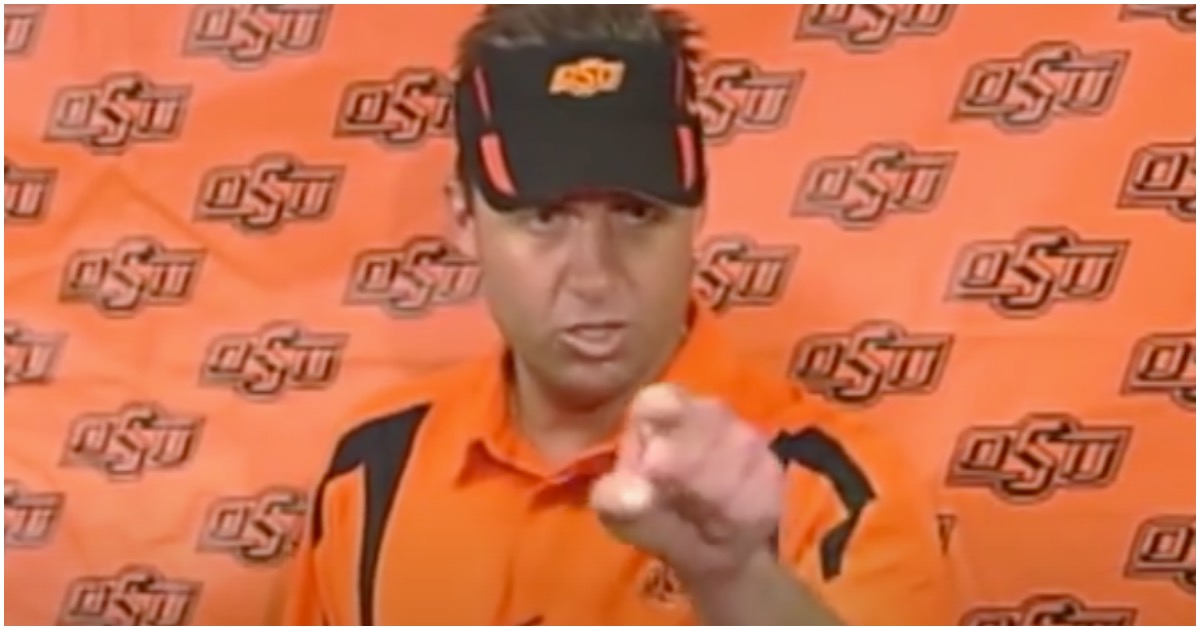 The following article, Football Player Calls Out Own Head Coach for Wearing Unacceptable Conservative T-Shirt, was first published on Flag And Cross.

Oklahoma State football Head Coach Mike Gundy is best know for telling the media “come at me, I’m a man, I’m 40” about a decade ago, during a post-game press conference.

You can watch it before. If you haven’t seen it, it’s a classic line in the sports-world.

On Monday, Gundy was called out by one of his own players for a reason that may or may not – but 100% is – absolutely ridiculous.

Chuba Hubbard, the nation’s leading rusher last season, will resume football activities after tweeting Monday that he “will not be doing anything with Oklahoma State until things CHANGE” in response to a photo of coach Mike Gundy wearing an OAN T-shirt.

I will not stand for this.. This is completely insensitive to everything going on in society, and it’s unacceptable. I will not be doing anything with Oklahoma State until things CHANGE. https://t.co/psxPn4Khoq

An arrogant, ignorant college kid is now demanding that a grown man not be able to express himself by wearing a t-shirt.

Yeah, Democrats are the party of the open-minded…mmhmm.

But guess who won?

Hubbard received support from multiple teammates and former players, but after the university president and athletic director both issued statements expressing concern, the running back posted a video of himself and Gundy in which the two shook hands.

Change is coming I promise you that. pic.twitter.com/wTGHtByh3N

Here’s that clip, as promised…

Since the team is diverse, Little Chuba better not be wearing any BLM shirts. All lives matter.

Seems it’s ok for the “players” to disrespect America with their kneeling and remarks but for a conservative to wear a shirt with his thinking on it is not to be allowed? Oh, that’s right, it’s liberals/dems/anti-Americans we are dealing with and they “have the right” to stop any statements that don’t agree with their agenda. And freedom of speech is only allowed from liberals….