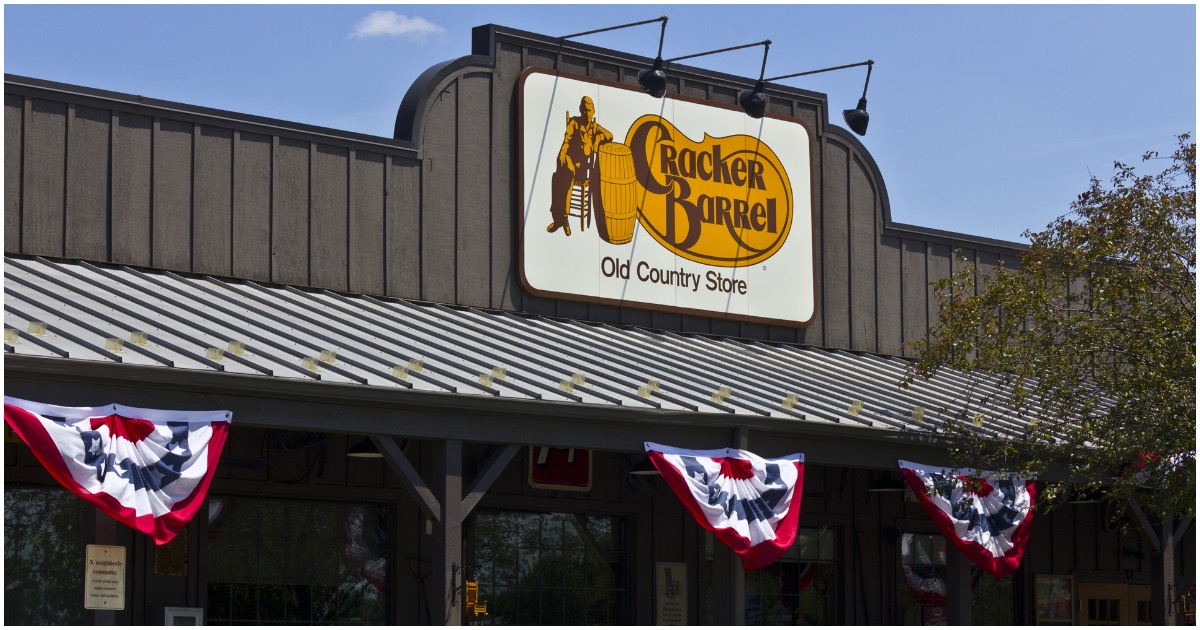 The following article, ‘Jim Crow’ Cracker Barrel Is the Left’s Latest Target — ‘Why Do Black PPL Eat’ There, Asks Woman, was first published on Flag And Cross.

Just watch. Cracker Barrel didn’t need the leftist mob coming after it to make the restaurant chain more popular. But it most likely will.

Can I get an amen or what, Chick-fil-A?

For some reason, completely out of the blue, Cracker Barrel is now racist. Anybody want to guess why?

I mean, really? They called it, Cracker Barrel… pic.twitter.com/lEvSJXBwew

FIRST OF ALL why do black ppl eat at Cracker Barrel?

It’s the most racist restaurant ever! Research the name! https://t.co/GRJnqXg4hn

Why wait to open the door? Those plantation rocking chairs give off the vibe from the porch. pic.twitter.com/oFB0VqjRX6

The ongoing protests in response to the death of George Floyd have not only called for widespread police reform, but have also re-opened a lot of conversations on racism throughout the U.S. Such is the case with Cracker Barrel, the Tennessee-based restaurant chain, and a lawsuit it settled back in 2004.

As Fox News reported at the time, Cracker Barrel settled a number of lawsuits filed by or supported by the NAACP, citing the chain’s numerous allegations of racism toward customers and employees for $8.7 million. Among the lawsuits, customers in 16 states said they were subjected to racial slurs, served food taken from the trash and segregated them due to their race. The settlement came just months after the chain had settled another lawsuit with the Justice Department, which made similar claims. Now, stories about Cracker Barrel have begun recirculating online.

Open the door to a Cracker Barrel and you get a whiff of Jim Crow. And biscuits. https://t.co/XhyBfZ5cwl

Can we cancel the Cracker Barrel for good? Idek if they racist forreal but any time I’ve ever been to one I’ve felt uncomfortable. I didn’t even know what racism truly was as a kid but I knew Cracker Barrel was racist

I’m surprised that everyone is surprised by Cracker Barrel

you really gonna tell me that a place that looks like this with a name like that is for black people??? Come on mayne pic.twitter.com/adLJUdUO4a

Cracker Barrel is trending. Let me tell you, that is a place on name alone I avoided like the plague as a black woman living in the South. And the stories I heard and now see on here is why… they come by that rep honestly pic.twitter.com/mcHMzF4iDn

Cause the food is good! If the BLM wants to shut them down, they will be dead! I am sick of their BS! this is past insanity. Time to take this country back! Sorry, death to the terrorists, you have no idea what is coming!!!!

Amen. This BLM is a bunch of BS. They show violence but complain of violence. How stupid. We don’t owe them nothing. They better get ready cause they are stirring a pot they will not be able to finish !!!

“Racist”? That isn’t even a word any longer, and if it was the dems believe that anyone not going along with the dem/socialist agenda is one??

How stupid can people get? They want to be recognized; they want attention. Ok, here’s your 15 seconds. if you don’t like anything about it, don’t eat there. Next case.

I’m like you you dont have to go there. That’s what I do I dont like a place I don’t go there. I dont care who goes where cause its their right. These idiots can’t even figure that out.

For them to complain about the name cracker. That makes THEM racist. Hope y’all never come back!!

Just stick to your fried chicken places.. just can’t go to KFC. He was a Colonel!!

The ignorance is pathetic! Yes, the name does say it all. The barrel was used to hold crackers in it so ANYONE who wanted to could sit in a rocking chair, usually around a pot bellied stove, share crackers, and tell stories or just talk. Same as what people do now in a bar.

People, they actually used to have crackers in actual barrels. It’s a southern restaurant with southern vibes. Stop projecting and leave cracker barrel alone! Its just a different culture.. the slow life… front porch and a cocacola… 🙄 not sure why rocking chairs are racist now too but sure why not. I support BLM but I dont believe this has anything to do with it. People just fishing for attention.

I’m sorry, but ALL lives Matter. So I guess that makes me racist! Bring it on!! I’m locked and loaded!!

Yea right. It’s getting to be if you look at a black person your a racist. It’s the black leadership who are racist.
They should be telling their people don’t break the law and you won’t have a problem. Stealing and killing along with looting doesn’t do anybody any good.

Would they like some gubbamint cheese to go with their Ripple w(h)ine?