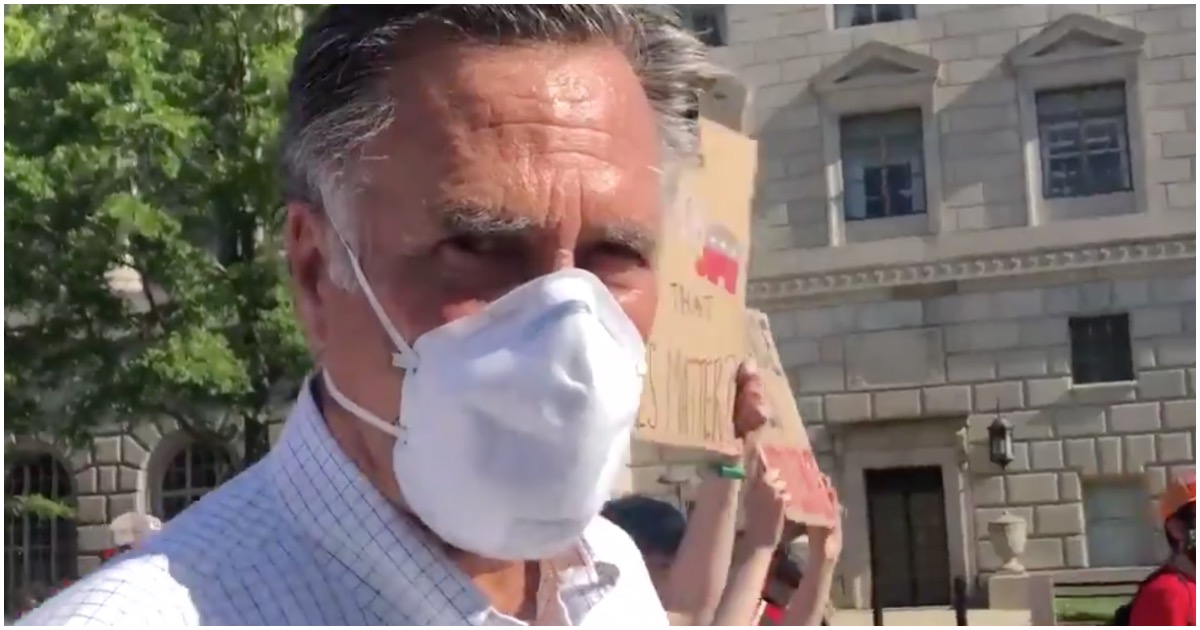 The following article, Romney Marches to White House to ‘Make Sure’ People ‘Understand’ Black Lives Matter, was first published on Flag And Cross.

Isn’t it great to see liberals and medical professionals think it’s okay for thousands to be near each other to protest the death of George Floyd, but not to go to a movie theater or a restaurant?

.@MittRomney is marching with a group of nearly 1,000 Christians to the White House. Here he is on video saying why he’s walking: “… to make sure that people understand that Black Lives Matter” https://t.co/KCxJNchCMs pic.twitter.com/Za0Am2WL8g

.@SenatorRomney marching in front of the WH: “We need a voice against racism, we need many voices against racism and against brutality. And we need to stand up and say black lives matter.” (w/ @alivitali) pic.twitter.com/rGrXvM6wty

Friendly reminder that Joe Biden literally told a crowd of black people that Mitt Romney was going to bring back slavery and put them in chains if he became president in 2012 https://t.co/1em2iGtFnk

This is my father, George Romney, participating in a Civil Rights march in the Detroit suburbs during the late 1960s—“Force alone will not eliminate riots,” he said. “We must eliminate the problems from which they stem.” pic.twitter.com/SzrcAyfPD8

Sen. Mitt Romney (R-Utah) offered a critical assessment of the federal government’s readiness for the novel coronavirus, describing it as not a “great moment in American leadership.”

Mitt whined, “The speed of our response looked slow compared to other people. That first phase will not stand out as a great moment in American leadership. We didn’t look real strong, and that’s kind of an understatement.”

While Romney said explicitly, “I’m not blaming this administration,” he suggested ways he’d be doing things differently if it were him in the Oval Office, primarily coordinating resources and response through the federal government.

Not long after Trump won the 2016 general election, Trump had dinner with Romney. Back then, there were rumors that the now-Utah senator might be nominated for secretary of state.

Obviously, nothing ever came of it.

Instead, Mitt continued to wage war with Trump verbally – often siding with Democrats on key issues.

It was reported that Romney was self-quarantining after being near Sen. Rand Paul (R-KY), who tested positive for Coronavirus.

President Trump reacts to the news that Mitt Romney is self-quarantining. pic.twitter.com/FnHutc7xd4

I’m hearing that the Great People of Utah are considering their vote for their Pompous Senator, Mitt Romney, to be a big mistake. I agree! He is a fool who is playing right into the hands of the Do Nothing Democrats! #IMPEACHMITTROMNEY

mitt romney, another rino and potential enemy of American justice. Makes one so sorry for voting for him in the general election of 2012, but then it was either him or obama….