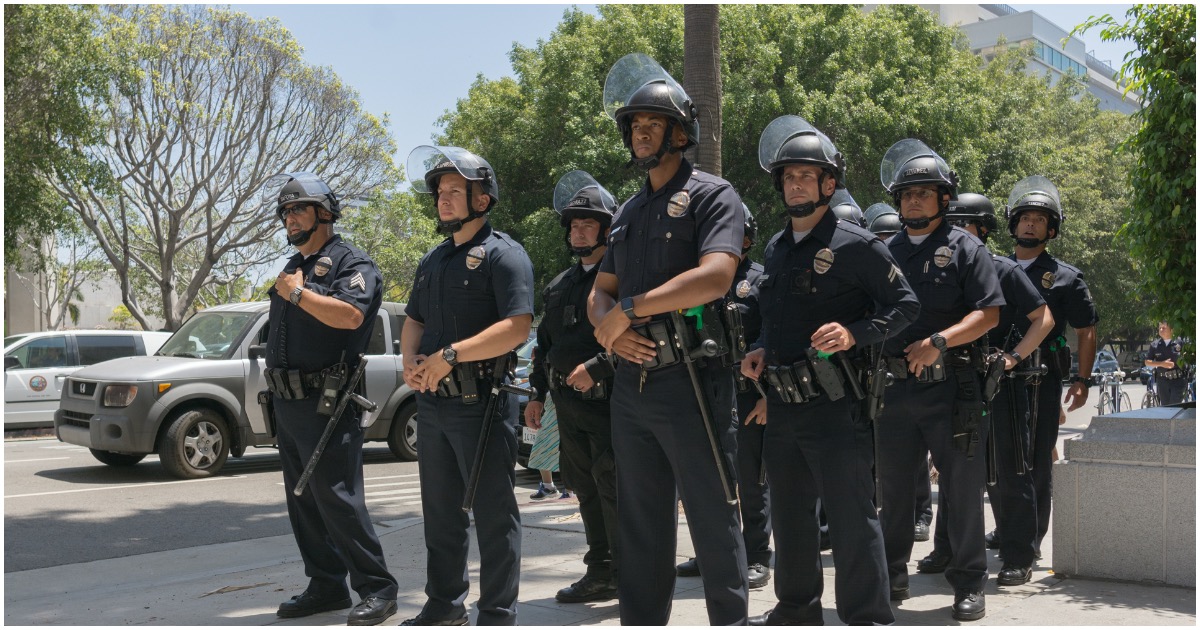 The following article, Report: Los Angeles to Divert Nearly $150 Million In Funds From LAPD to Other Services, was first published on Flag And Cross.

As if Los Angeles (and nearly all of California) wasn’t already enough of a liberal cesspool, Los Angeles is looking to cut upwards of $150 million from its police department.

LOS ANGELES (KABC) — Three Los Angeles City Council members introduced legislation on Wednesday that would reduce funding for the Los Angeles Police Department and shift the funds to other services. The proposal comes amid another day of protests that drew thousands in Los Angeles.

Officials said the legislation would “reprioritize public safety dollars in order to reinvest funding for other vital services, including those to uplift disenfranchised communities,” according to a news release.

The far-left mayor of L.A. (as well as the city’s chief of police), wants the entire nation to understand that lawlessness is acceptable in the Golden State.

In fact, Mayor Eric Garcetti and Chief Michel Moore are so proud of their city for harboring illegal aliens that they’ve put out yet another embarrassing video.

The two men are determined to avoid cooperate with ICE in order to keep residents of L.A. safe.

Just something to keep in mind the next time you happen to visit the Golden State.

Regardless of your immigration status, I want every Angeleno to know your city is on your side. Here in Los Angeles, our police department does not coordinate with ICE or participate in immigration enforcement.

If people can’t even respect our country’s immigration laws why should we be catering to them like you do 24/7 ?

I can understand the mayor speaking to this nonsense, but for that stooge officer on the left to reiterate what the mayor is saying is proof LA if full of spineless cops whom are a stain to police officers around the country, they are spitting on the constitution not upholding it

If one is an illegal alien, then this is NOT their city. Or state. Or nation.

Can our police also let it slide when we speed or miss stop lights? How about when someone wants to build a treehouse without a permit? Or, here’s a good one, choose to work as an independent contractor without triggering #AB5 enforcement?

No one is above the law, eh?

Please provide us with a comprehensive list of all the laws you don’t feel like enforcing. We’d like to know which ones we can break with impunity. Thanks.

In other words, Americans should stay out of LA. It’s full of criminals and they have no intention of prosecuting any of them.
Good luck with that.

“We will obstruct federal law enforcement officers, making their jobs much more dangerous, while we are aiding and abeding criminals”

Political appointed hack as the head of the police department. How many crimes has he covered up for politicians to get that job?
We all know there is no way that he could ever have been a TRUE police officer.
Disgrace to the badge.

You are losing a lot of reasonable progressives on this issue. There has to be something between children in cages and “there’s no such thing as an undocumented immigrant”. We should know who is coming into our country & have control over it while welcoming law abiding immigrants

Also, if we have laws, they should be enforced. If you believe in open borders then fight for that and see if people support it. As long as we have borders and laws that control them, enforce those laws. You can’t say “You broke the law to be here but we welcome you.”

What crap it is to say that all “Angelenos” support or benefit from your sanctuary city policy. Hollywood/LA is a magnet for more and more illegals, anchor babies, and felony and drunk driving crimes by the illegal communities now widespread in the whole metropolitan area.

So this should free Garcetti and the LAPD to remove the bums that have been camping out on my street corner for years.

If only you were this committed to the 59,000 homeless human beings suffering on the streets of Los Angeles.

You have abandoned them all.

It does not help American citizens living in California when you enable lawlessness, and go as far as to coddle and protect criminals. This is a violation of our civil rights as Anericans. It’s time for you to honor your charge to protect and defend American citizens.

Mayor, if you aren't willing to enforce federal law you should never take federal fundi g for anything. Simple as that. Btw, to put your legal immigrant citizens and natural citizens safety at risk.

Continue reading: Report: Los Angeles to Divert Nearly $150 Million In Funds From LAPD to Other Services ...

Yeah los angeles, remove the thin blue line and see where that takes you. Then those looting & rioting criminals can move their lawlessness to more elite’s areas. Should be something to watch.