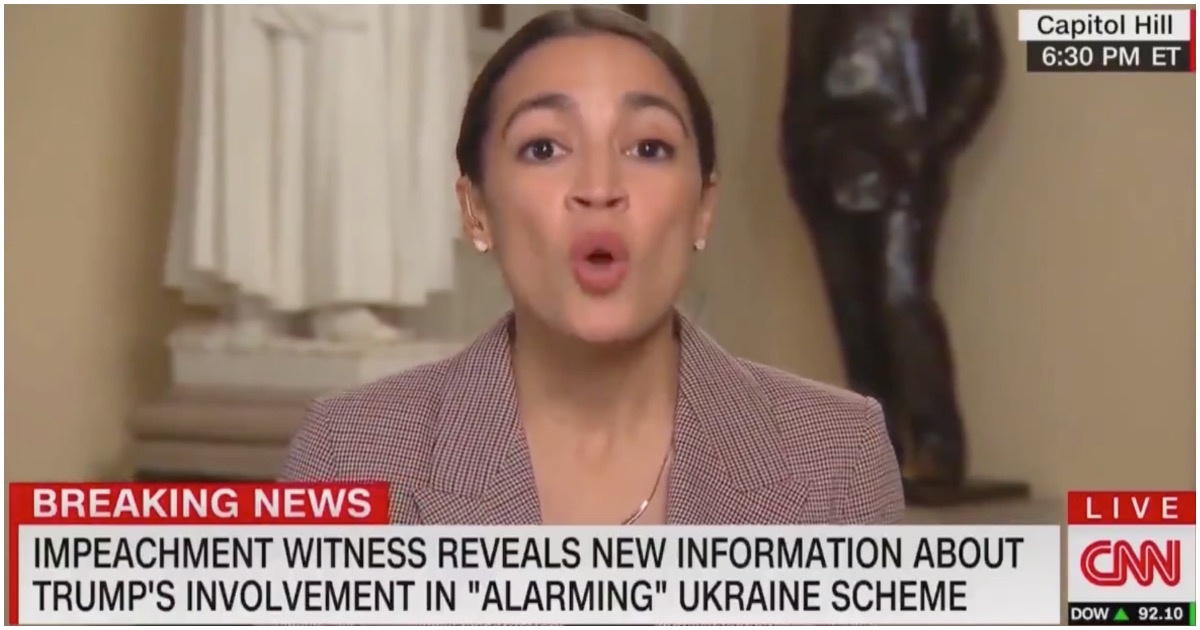 The following article, Flashback: AOC Admits Impeachment Is to ‘Prevent’ Trump From Winning Re-Election (Video), was first published on Flag And Cross.

In case you haven’t heard, Bernie Sanders said Alexandria Ocasio-Cortez would be a key part of his administration if he gets to the White House. Just something for you to keep in mind and share with every single person you come into contact with.

That alone should be enough to end his candidacy.

Now, to this story. AOC just admitted what all conservatives have been thinking for quite some time. The impeachment fiasco surrounding President Trump is happening in order to “prevent” him from winning re-election.

On Wednesday’s broadcast of CNN’s “The Situation Room,” Rep. Alexandria Ocasio-Cortez (D-NY) said today’s public hearing in the impeachment inquiry of President Donald Trump was ”not just about something that has occurred.”

She said it was instead “about preventing a potentially disastrous outcome from occurring next year.”

She stated, “We also need to move quite quickly because we’re talking about the potential compromise of the 2020 elections. And so this is not just about something that has occurred; this is about preventing a potentially disastrous outcome from occurring next year.”

You have to give credit where it’s due, regardless of political ideology. Democrats struggle with even that simple concept. For example, ISIS leader Abu Bakr al-Baghdadi would absolutely still be alive today were it not for Trump giving the order to take him down.

And yet, 2020 Democrat presidential candidates are refusing to acknowledge Trump’s actions. And what does this do for ’em besides make them appear even more petty?

Who does PR for these people?

Abu Bakr al Baghdadi was a murderer and terrorist responsible for terrible suffering and death. The fight against ISIS would not be possible without the brave efforts of the Kurds and other U.S. allies.

Last night, our special forces brought the leader of one of history's most destructive terrorist groups to justice. Let's thank our service members for their courage; and recommit to protecting all of the allies who are working with us to defeat ISIS—including the Kurds.

(1/2) Abu Bakr al-Baghdadi led a campaign of mass violence and terror that devastated the region and threatened the world. His death is a setback for ISIS and a victory for justice. I am grateful for the skill and courage of our special operations and intelligence professionals.

(2/2) Baghdadi's death closes one chapter, but it is not the end of our fight against terrorism. We need a settlement that ends the suffering and destruction in Syria—and ultimately, a long-term plan to counter extremism and allow the region to achieve peace and stability.

I congratulate our special forces, our intelligence community, and all our brave military professionals on delivering justice to the terrorist Abu Bakr al-Baghdadi. The world is better and safer without him in it. pic.twitter.com/miLSVWBT9l

A ruthless murderer has been brought to justice. I’m grateful to our military and intelligence community. Their courage and dedication inspire us all.

Abandoning our Syrian and Kurdish partners remains a disastrous decision that will make the fight against ISIS harder.

This is a blow against ISIS and an important step in the fight against stateless terrorism. Credit should go to all who were involved; above all to the brave Americans in uniform and intelligence professionals who risked their lives to complete this mission. Today, we honor them. https://t.co/DYYaotLN6D

Thank you and congratulations to our special operations forces and others involved in tracking and getting rid of ISIS/Daesh leader Baghdadi. But as we learned with the death of Osama Bin Laden, whose org al-Qaeda is now…

… stronger than ever, Daesh will continue due to the short-sighted policies of Trump — including his support for Erdogan and Saudi Arabia, which helps spread the extremist ideology that acts as the fuel for Daesh, al-Qaeda, etc. As president, I will end all such support.

Al-Baghdadi was a dangerous terrorist who committed heinous crimes. As I said this morning, getting rid of him was good for America and the world. But as I discussed today on @FaceTheNation many challenges remain… https://t.co/etUyy7PtBx

ISIS has caused immeasurable suffering & destruction; the death of Abu Bakr Al-Baghdadi was an important, much needed action to defeat it. Praise and thanks for the military bravery and brilliance that carried out the mission.

I am grateful for the brave patriots who risked their lives to advance our safety and security. Abu Bakr Al-Baghdadi was a monster and the world is better without him. Today we should reflect on the work of our amazing armed forces and all those who contributed to this operation.

Grateful to the men and women of our military and intelligence community for their commitment, persistence, and skill. While this isn’t the end of our efforts, this marks a significant milestone in our fight against ISIS. https://t.co/etSlXjASVF

The death of al-Baghdadi is a major blow to ISIS and a testament to our armed forces. It will make the world safer. Congratulations to the special ops team that executed the mission and everyone in the chain of command. This is a great accomplishment for America and the world.