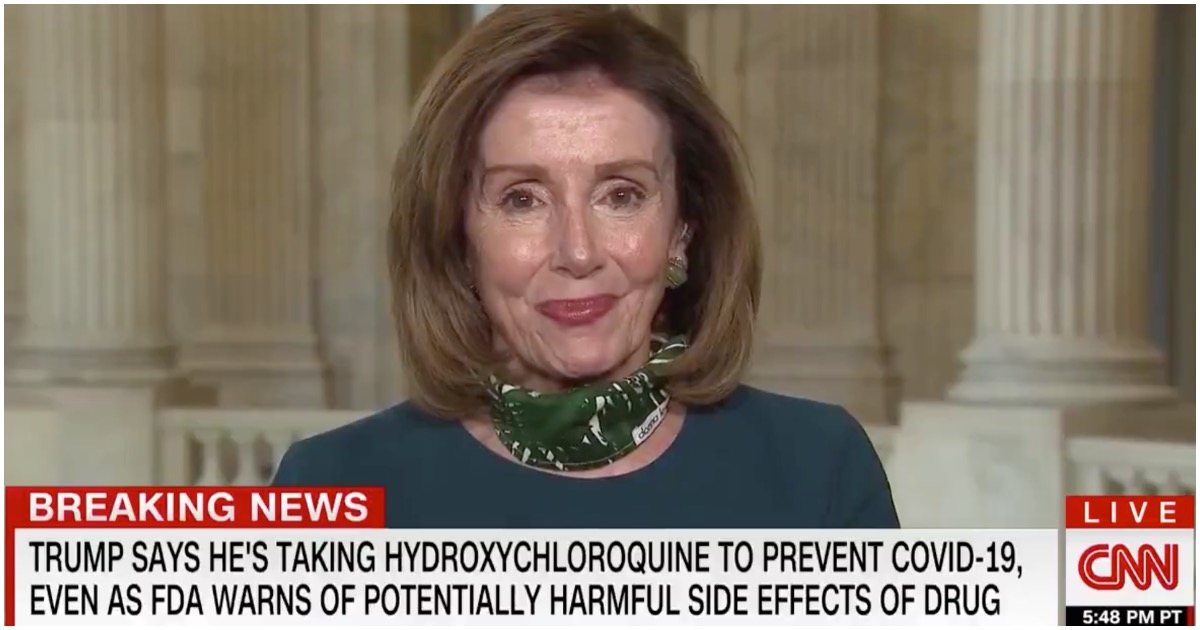 The following article, ‘Morbidly Obese’ Trump Should Not Be Taking Hydroxychloroquine, Says Pelosi (Watch), was first published on Flag And Cross.

POTUS then added, “I got a letter from the doctor a the other day from Westchester, New York, around the area, he didn’t want anything. He just said, sir, I have hundreds of patients, and I give them Hydroxychloroquine. I gave them of the Z-pack which is azithromycin, and I give them zinc. Out of hundreds of patients, many hundreds, over 300 patients, I haven’t lost one. He said please keep pressing that, sir.”

Enter Speaker of the House Pelosi (D-CA), via Daily Wire:

Democrat House Speaker Nancy Pelosi mocked President Donald Trump’s weight during an interview on Monday night, saying that Trump should not take hydroxychloroquine prescribed by his doctor because he is “morbidly obese.”

She cackled, “As far as the president is concerned, he’s our president and I would rather he not be taking something that has not been approved by the scientists, especially in his age group and in his, shall we say, weight group, morbidly obese, they say. So I think it’s not a good idea.”

Pelosi is a just another good Democrat.

In late February, not long before many states went on lockdown, Nancy went to Chinatown in San Francisco and called upon people to visit the area and patronize restaurants.

Pelosi ended up looking like a complete fool, as the world came to a halt in the coming weeks.

At 80 she shouldn’t be have
Ing a face lift every year especially on our nickel. That skinny ass scarecrow needs to grow up or hurry and die. So what’s she taking to keep from getting Ovid?? Bet it’s the same😂😂

How funny, and this coming from Old Hag, Botox Pelosi, whose small brain has been affected by all the Botox she keeps injecting on her face(which has NOT improved looks on her sagging face). She needs to be institutionalized in a Senior Rest Home due to her ‘severe Dementia’… She’s as loony as she looks. As for that ridiculous comment about Trump being ‘obese’….apparently even her puny eyesight is gone!