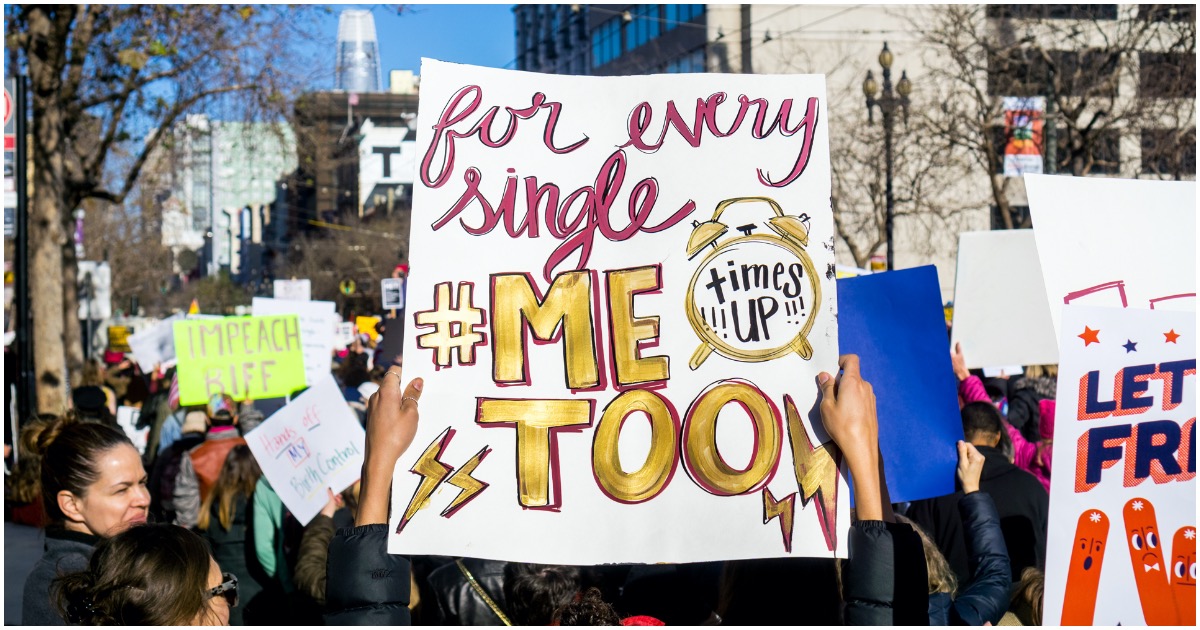 The following article, Founders of #MeToo Movement & Time’s Up Won’t Support Tara Reade, Back Biden Instead, was first published on Flag And Cross.

Women are to be believed, always, so long as the man who allegedly assaulted them is a Republican. That is the bottom line, unequivocally.

You’d think the founders of #MeToo and Time’s Up would support Tara Reade, considering she’s, you know, a woman.

But because Joe Biden is a Democrat who has a chance to unseat President Trump, nothing else matters.

Last week, the founder of the #MeToo movement, Tarana Burke, declined to back Tara Reade, a former staffer for presumptive 2020 Democratic nominee Joe Biden, who says Biden sexually assaulted her when she worked in his Senate offices in the mid-1990s.

Now, “Time’s Up” the organization developed from the #MeToo movement and charged with providing financial and legal assistance to women who accuse high-powered men of sexual harassment and assault has declined to provide that assitance to Reade. Instead, it’s CEO, Tina Tchen, praised Biden for his “transparency.”

Tchen, of course, worked alongside Biden as a senior advisor to the Obama administration. She’s been active in a number of causes since leaving the White House, including Time’s Up, and even, last year, acted as a go-between, delivering messages from the family of Jussie Smollett, who was then accused of staging his own hate crime in Chicago, and the Cook County State’s Attorney, urging prosecutors to drop the case against Smollett or refer it to the FBI.

Tara Reade, the woman who has accused Joe Biden of sexual assault, is calling on the presumptive White House nominee to release the records from his 36 years as a senator, which have been inaccessible to the public, kept at the University of Delaware – Fox News

The University of Delaware today refused to provide us with the agreement detailing why Biden's senate documents – related to Tara Reade's allegations of sexual assault against Biden and stored by the university – may not be unsealed.https://t.co/CoT1HiMi3A

“Violence against women is a huge problem and especially right now… And it's been one of the leading causes of my life."

He still has yet to personally address Tara Reade’s allegations
pic.twitter.com/Qua5gO5Kvy

Is Tara Reade a hero? Or is it different when the alleged perpetrator is a Democrat? https://t.co/3qmjdVOUgA

One guess who said this during Kavanaugh fight: 'For a woman to come forward in the glaring lights of focus, nationally, you’ve got to start off with the presumption that at least the essence of what she’s talking about is real.' From @NRO https://t.co/n0bnvz6bzl

CNN is going to look for anything they can try to turn into a scandal because they are desperately trying to avoid having to cover Biden being credibly accused of rape by Tara Reade https://t.co/7aAuPrh4xN

The Tara Reade allegation against Joe Biden is a reminder

– Over 250 Sexual Harassment Lawsuits Hidden from the Public by Congresshttps://t.co/ZyybWwbKTc

For those who don’t want to retweet someone as moronic as Charlie Kirk.

Alyssa Milano is now coming out in support of Tara Reade.

The tables are turning, Joe.

The difference is that biden being a democrat has a much lower line to be above, if there is any such line for dems/liberals. Time to take back America by voting out all dems & rinos this year.