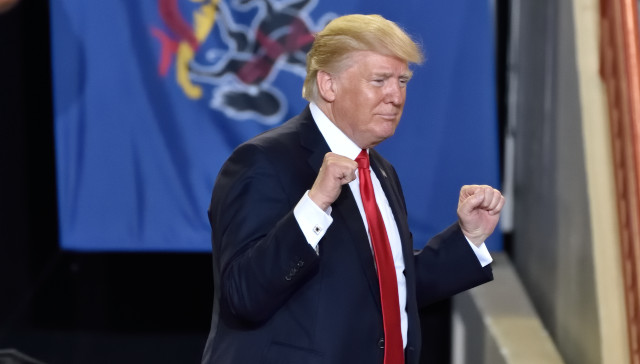 If you listened to the mainstream media, you’d swear up and down that the vast majority of Americans in this country hated President Trump and were extremely disappointed with his handling of the coronavirus crisis, but that’s all fake news.

In fact, a new poll released by Gallup has the president’s approval rating hitting a brand new surge as the COVID-19 outbreak continues to rage on across the United States, news that should put a smile on Trump’s face and continue to irk Democratic Party presumptive nominee Joe Biden.

Here’s more information on the poll from The Washington Examiner:

The latest Gallup survey found that 49% of adults approve of the president’s job, up from 43% two weeks ago. Trump has never crossed 49% in the Gallup survey.

The pop came despite crushing media criticism of his fight against the coronavirus and push to reopen the economy.

But it also came as the stock market was signaling support, and many in the United States joined with his call to get the U.S. back to work.

According to Gallup, what really helped to give President Trump a boost was the the increasing support of independents.

Again, the news media in this country is reporting a narrative that has people hating the president and being disappointed with his handling of this pandemic, but that’s not the truth. The mainstream media has an agenda to push and that’s precisely what they are doing.

This is why, as folks with fully functioning brain cells, it’s critical to ensure that all of the stories we are fed by the mainstream media are checked and verified by multiple sources. We have to do the job of the press to ensure we are receiving both sides of a given story. That’s just the reality we live in right now.

And this has to have many dems/socialists in a panic with their TDS. Appears that real Americans are seeing the dem political party for what some/many of us have realized for years; that being that the dems would rather destroy America than the country be successful under management of other than liberals.

Tom I agree, with dems thinking that we should open borders, minimize the military, free stuff to all except GOP’s, healthcare to all which we have always had, closing fossil fuel corporations thinking we’re a friendly nation. Which results in dictatorship countries to walk in without a fight because of our diminished military easily overrun and then slavery. The USA that stands now is strong is keeping these countries from overrunning other weaker countries from demise. Trump 2020

need to get socialist democratic governors out of the way