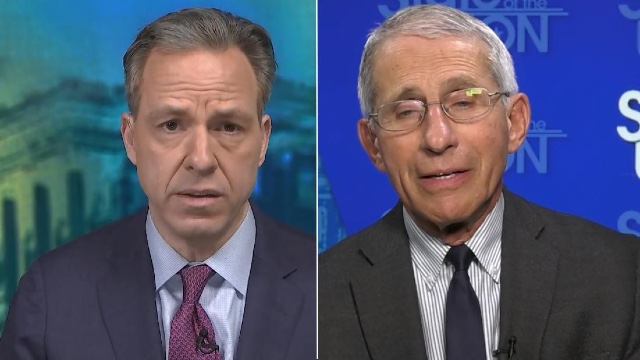 The following article, Not Long After Fauci Claims Govt Could’ve Moved Faster Against Coronavirus, Trump Retweets Call To Have Him Fired, was first published on Flag And Cross.

There seems to be some very bad blood between Dr. Anthony Fauci, a member of President Trump’s coronavirus task force, and the president himself, a fact that has become particularly evident after what unfolded not long after Fauci made an appearance on Jake Tapper’s CNN Sunday news program criticizing the Trump administration for not acting fast enough at the outset of the coronavirus outbreak.

Fauci stated during the interview that he advised the current administration to start social distancing back in February, noting that had different measures been taken lives could have been saved.

After the interview, Trump retweeted a post calling for Fauci to be fired.

The relevant part of the conversation between Tapper and Fauci went like this:

Fauci: You know, it isn’t as simple as that, Jake, I’m sorry. I disagree. To say this is all happening because we got started too late, obviously, if you look, could we have done something a little bit earlier that would have had an impact? Obviously. But where we are right now is the result of a number of factors: the size of the country; the homogeneity of the country. I think it’s a little bit unfair to compare us to South Korea, where they had an outbreak in Daegu and they had the capability of immediately essentially shutting it off completely in a way that we may not have ben able to do in this country. So obviously it would have been nice if we had a better head start, but I don’t think you could say that we are where we are right now because of one factor. It’s very complicated, Jake.

Tapper: The New York Times reported yesterday that you and other top officials wanted to recommend social and physical distancing guidelines to President Trump as far back as the third week of February, but the administration didn’t announce such guidelines to the American public until March 16th, almost a month later. Why?

Fauci: You know, Jake, as I’ve said many times, we look at it from a pure health standpoint. We make a recommendation, often the recommendation is taken. Sometimes it’s not but it is what it is we are where we are right now.

Tapper: Do you think lives could have been saved if social distancing, physical distancing, stay-at-home measures, had started the third week of February instead of mid-March?

Fauci: You know, Jake, again, it’s the “what would have, what could have.” It’s very difficult to go back and say that. I mean, obviously you could logically say that if you had a process that was ongoing and you started mitigation earlier, you could have saved lives. Obviously no one is going to deny that. But what goes into those kinds of decisions is complicated. But you’re right, I mean, obviously, if we had right from the very beginning shut everything down, it may have been a little bit different but there was a lot of pushback about shutting things down back then.

A GOP candidate who ran against House Speaker Nancy Pelosi for her seat and lost responded to the interview between Fauci and Tapper by tweeting, Fauci is now saying that had Trump listened to the medical experts earlier he could’ve saved more lives. Fauci was telling people on February 29th that there was nothing to worry about and it posed no threat to the US public at large. Time to #FireFauci.”

Fauci is now saying that had Trump listened to the medical experts earlier he could've saved more lives.

Fauci was telling people on February 29th that there was nothing to worry about and it posed no threat to the US public at large.

Sorry Fake News, it’s all on tape. I banned China long before people spoke up. Thank you @OANN https://t.co/d40JQkUZg5

Things are not looking too good for Fauci in light of the comments he made, and who can blame the president for feeling animosity toward the doctor? They are supposed to be working on the same team to try and keep the spread of this virus under control. This is a task that cannot be done if they aren’t on the same page.

The president needs to be surrounded with people who can avoid playing the blame game until after this whole mess is over with, and if Fauci cannot stay on mission, perhaps it’s best to let him go and replace him with someone who can.

Continue reading: Not Long After Fauci Claims Govt Could’ve Moved Faster Against Coronavirus, Trump Retweets Call To Have Him Fired ...