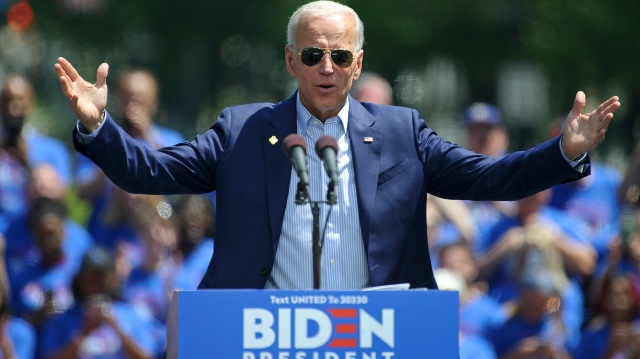 The following article, Joe Biden Gets Number Of Grandchildren Wrong, Wife Jill Corrects Him, was first published on Flag And Cross.

One of the most important qualities a potential president must have is the mental faculties to do a most stressful job. He or she must be able to recall information accurately, on the spot, and any failure in said individual’s ability to do that really does put that person in question as far as their mental fitness for the office.

This is what makes every single one of former Vice President Joe Biden’s recent gaffes so alarming. He’s forgotten the Declaration of Independence, made numerous blunders in regards to numerical information, and has even forgotten questions he was asked by reporters.

Well, you can now add “forgetting the number of his grandchildren” to the list of issues that are making him a questionable choice for the Democratic Presidential nomination.

During a town hall hosted on Sunday night, Joe Biden and his wife Jill acknowledged they have a new addition to the family, some new grandchildren, a week after their births.

The virtual town hall kicked off with Jill Biden saying, “We have three children, and we have six grandchildren.”

The former VP added that their grandchildren ranged in age from “seniors in law school to little infants.”

Joe Biden’s second son, Hunter Biden, 50, and his second wife, Melissa Cohen, 33, welcomed a baby boy on March 28, according to the New York Post. But during an appearance last week on NBC’s The Tonight Show Starring Jimmy Fallon, Joe Biden, a Delaware senator for 36 years, failed to mention the newborn.

“I have five grandchildren. Every single day, I either talk to them or we text,” Biden told Fallon.

Strangely, this account from the 36-year senator completely omits the daughter that his son Hunter recently had with Lunden Roberts, a 29-year-old Arkansas woman who gave birth to the child back in August of 2018. The younger Biden initially denied being the baby’s father, but agreed in March to pay child support after a paternity battle ensued.

Hunter also has three older children with his first wife, Kathleen Buhle. The two were together for 24 years. The couple called it quits back in 2017.

The elder Biden has two grandchildren from his deceased son Beau.

Kind of sad that he didn’t want to mention that poor little baby fathered by his son. Says a lot about Biden’s moral character. Of course, maybe it was accidental, which means he’s mental sharpness is getting a bit dull.

Either way, it’s not a good look for the guy.