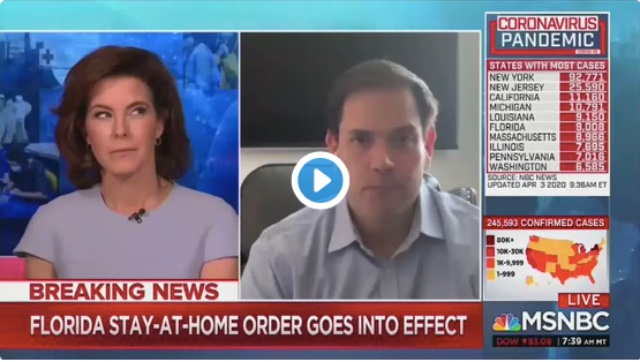 The following article, Marco Rubio Gets Confronted By MSNBC Host Over Saying Some Journalists ‘Giddy’ Over COVID-19, was first published on Flag And Cross.

Sen. Marco Rubio has found himself in the hot seat with MSNBC host Stephanie Ruhle after making the comment that some journalists are thrilled over the spread of the coronavirus, a statement he defended.

Ruhle asked Rubio to explain the tweet which he made earlier in the week, noting a portion where he said: “Some in our media can’t contain their glee & delight in reporting that the U.S. has more #CoronaVirus cases than #China…Beyond being grotesque, it’s bad journalism.”

Some in our media can’t contain their glee & delight in reporting that the U.S. has more #CoronaVirus cases than #China

Beyond being grotesque,its bad journalism

“I need to ask you this, because I’m a journalist,” Ruhle said. “We’re not just some personalities. You called out journalism. And I need to understand why on earth you did this.”

Rubio said some journalists are “doing exactly what I said.”

“Well, because there are some journalists that were doing exactly what I said,” the Florida Republican responded. “I read reports about how some Republicans are doing this, or some members of Congress are doing that. I don’t know what other word to describe who’s doing something and who isn’t.”

Rubio gave a few examples of certain situations where he believes that journalists expressed happiness in reporting on coronavirus figures and noted that he said “some” not all journalists were behaving this way.

MSNBC host Stephanie Ruhle confronts Rubio about his tweet claiming the media "couldn't contain their glee" about the number of COVID-19 cases in the U.S. pic.twitter.com/It57vg5zb8

Rubio found support among many on the right, including Caleb Hull who tweeted:

This tweet is objectively true. Amazing how many blue checks are triggered by it.

The bottom line is, there are probably some journalists who are excited by the prospects that this virus is providing for the progressive movement. After all, Democrats are using this situation to try and pass a bunch of pet projects they want made law through inside these coronavirus relief packages, so is it so far fetched to think liberal journalists might think the same way?

Regardless, here’s to hoping this all goes away sooner rather than later.

Continue reading: Marco Rubio Gets Confronted By MSNBC Host Over Saying Some Journalists ‘Giddy’ Over COVID-19 ...

So obvious that the dem politicians & their supporters are wanting America to fail believing that a crisis might allow them to re take power. And if the country went down and was destroyed, doesn’t matter to them. Liberals in power at any cost. Time to take back America by voting out all dems & rinos.