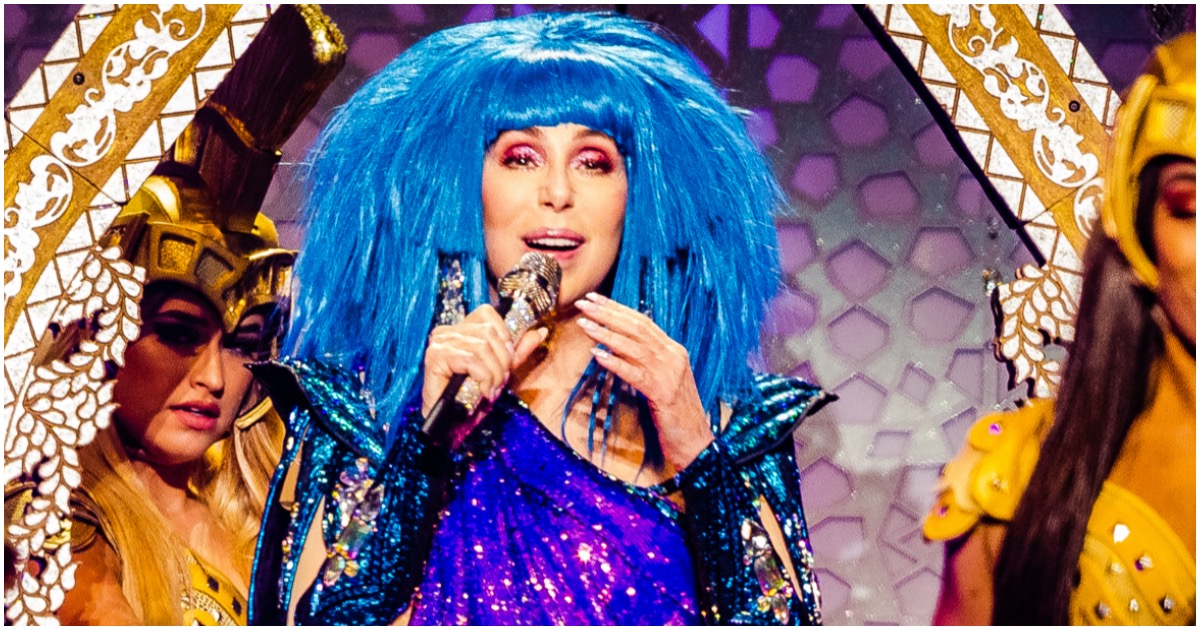 The following article, Academy Award Winner Cher to President Trump: You Are ‘A Liar & Murderer’, was first published on Flag And Cross.

Cher just can’t help herself. She knows that President Trump and his administration are doing everything possible to keep the American people safe, but she won’t admit it because it wouldn’t be good for her brand.

That’s the problem with Hollywood. It’s all about image and politics. If you’re not 100% liberal, you’re not one of them.

Check out the Academy Award Winner’s latest for POTUS, via Breitbart:

Cher has called President Donald Trump “a cancer ravaging our nation.” She demanded last week that the president step down before he ends up killing thousands of Americans. And now, the left-wing pop icon has declared President Trump a “murderer.” 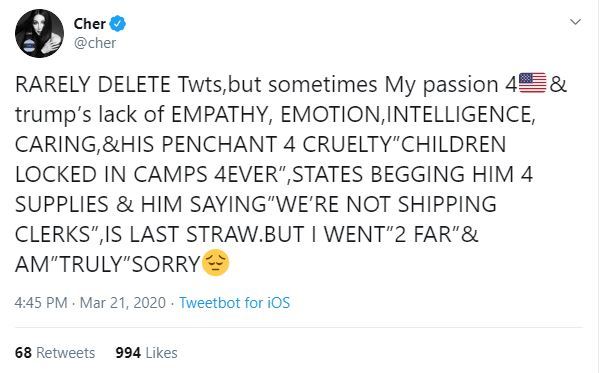 With a single tweet just hours before Father’s Day 2019, the singer wished some pretty awful things on the most powerful man in the world.

The far-left mainstream media won’t even bat an eye, though. Because this is our world now.

Left-wing pop singer Cher is once again on the attack against President Donald Trump over immigration policy as she reacts to the newest reports of ICE detentions.

Cher jumped to her Twitter account to bemoan the renewed reports that Immigration and Customs Enforcement is holding children of illegal aliens who tried to sneak across the U.S.-Mexico border.

.
Wish He Was Locked In Hot Cage,With Dirty Water pic.twitter.com/NhfAozAxxL

Cher absolutely loathes Trump. Everyone and their mother knows that.

What’s weird is that she appeared to have a moment of clarity in which she agreed with POTUS on immigration, while blasting Democrats’ open border policies.

I Understand Helping struggling Immigrants,but MY CITY (Los Angeles) ISNT TAKING CARE OF ITS OWN.WHAT ABOUT THE 50,000+

Citizens WHO LIVE ON THE STREETS.PPL WHO LIVE BELOW POVERTY LINE,& HUNGRY? If My State Can’t Take Care of Its Own(Many Are VETS)How Can it Take Care Of More

Is this the beginning of something?

Will far-left nutjobs in Hollywood and Congress finally catch on to what conservatives have been saying from the jump?

Maybe Trump’s suggestion of placing border crossers in “sanctuary cities” was enough to throw Cher over the top.

REPUBLICANS BELIEVE THEY’VE GOT GOD GIVEN RIGHT 2 DICTATE WHAT WE DO WITH OUR BODIES.WOMEN MUST MAKE LAWS 2 CONTROL MENS BODIES. NO VIAGRA,ROGAIN, TESTOSTERONE

ALL MEN MUST BE CIRCUMCISED,& SHOW PAPERS OR PENIS 2 PROVE IT.MASSAGE PARLORS PUNISHABLE BY

.MEN MUST TAKE THE

WHY IS trump”ALWAYS”
PR MAN 4 VILLAINS

WITH ENVY.HE WANTS 2 BE A

,BUT HOW CAN HE CARE”NOTHING”FOR OTTO
WARMBIER

Cher while I don’t normally comment on Hollywood “stars” comment, I cannot ignore your ignorance. You along with many of your cohorts are brainless to make comments like this. Many of our citizens are scared, especially when they see on the streets enforcing martial law in Democratic states. If you cannot say something encouraging, please kkep quiet.

But cher played a intelligent person in a movie once, so doesn’t that qualify her to make her remarks????

No but she did stay at a holiday inn express

And to think I once liked her! Shame on me!

The elites are evil. Americans are just slaves today. The US is not a democracy. Our overlords have decreed that we must give our DNA, photographs, and fingerprints to the government, be groped, be wiretapped, be forbidden from owning guns, be prohibited from having free speech, be banned from owning businesses, lose the right to a trial, and lose the right to be free from torture. The globalists, politicians, government workers, soldiers, cops, and Americans who obey and stay silent are all responsible for this prison. This lockdown will either be a temporary test or become permanent. The 99% will… Read more »

Slow down on your drinking, you may run out before this over.

And she’s still an arrogant “ho”!

CHER appears to be “LOSING-HER-HEAD” …… Oh, wait a minute, that was Sonny. Cher, this is no time for your hatred. We are trying to survive and you bring out your petty shit at this time. You have plenty of bread and can survive any downfall, but not the rest of us. YOU SELF-CENTERED POS.

Another has been. Give it up. We don’t care what you think. The best part of your singing was sunny.