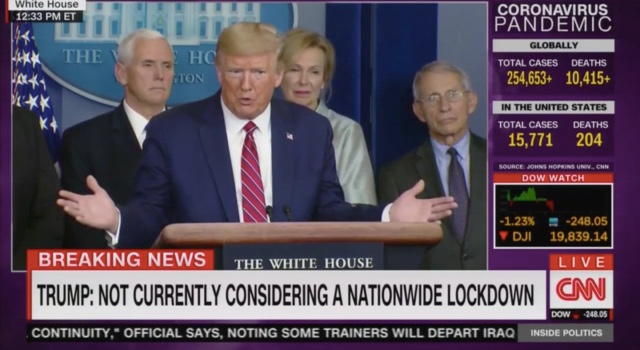 The following article, Trump Slams ‘Terrible’ NBC Reporter: ‘Get Back To Reporting Instead Of Sensationalism’, was first published on Flag And Cross.

President Trump handed out a pretty tough dig to a reporter from NBC who asked him a question about Americans “who are scared” about the coronavirus outbreak flooding hospitals and local communities with cases of the illness.

Now, to provide proper context for Trump’s frustrations, it’s important to note that the president has been having a lot of difficulty dealing with the mainstream media who consistently say that his calling the COVID-19 virus the “Chinese virus,” accusing him of being a racist.

“I say, I think you are a terrible reporter, that’s what I say,” Trump told the reporter, NBC News’ Peter Alexander, at Friday’s White House coronavirus press briefing. “I think that’s a very nasty question and I think it is a very bad signal that you are putting out to the American people.”

“The American people are looking for answers are they’re looking for hope and you’re doing sensationalism, the same with NBC and ‘Con-cast.’ I don’t call it Comcast, I call it ‘Con-cast,’ whom you work,” he said.

“Let me say something,” the president continued. “That’s really bad reporting. You ought to get back to reporting instead of sensationalism. Let’s see if it works. It might, and it might not. I happen to feel good about it, but who knows? I have been right a lot. Let’s see what happens.”

To be fair, the president is not exactly wrong. The mainstream media in America has been very bad about sensationalizing the virus ever since it hit our shores. They have done far more fear mongering than they have been equipping folks with what they need to know in order to get through this rough ordeal.

Was the president a little harsh? Maybe.

Continue reading: Trump Slams ‘Terrible’ NBC Reporter: ‘Get Back To Reporting Instead Of Sensationalism’ ...