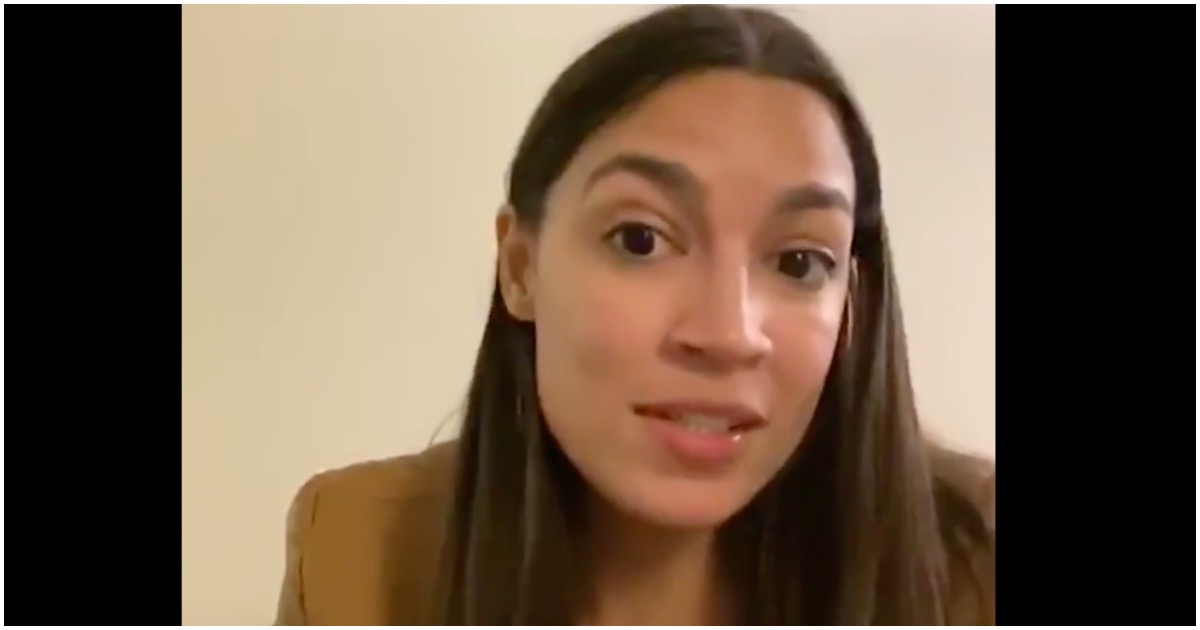 The following article, AOC: People Aren’t Eating At Asian Restaurants Because They Are ‘Racist’ About Coronavirus, was first published on Flag And Cross.

Does rookie lawmaker Alexandria Ocasio-Cortez (NY) have facts to back up her latest nonsensical rant? Probably not. But then again, that is largely how Democrats operate.

According to AOC, people aren’t going to Asian restaurants because they are “racist” and think every person of Asian descent (or something) is infected with the Coronavirus. Where in the world did this come from?

It’s as if this woman lives in her own world. Also, “patroning” isn’t a word.

Ocasio-Cortez says people are not eating at Chinese and Asian restaurants right now because they are "just straight up" racist about the coronavirus pic.twitter.com/egtpRDEDhO 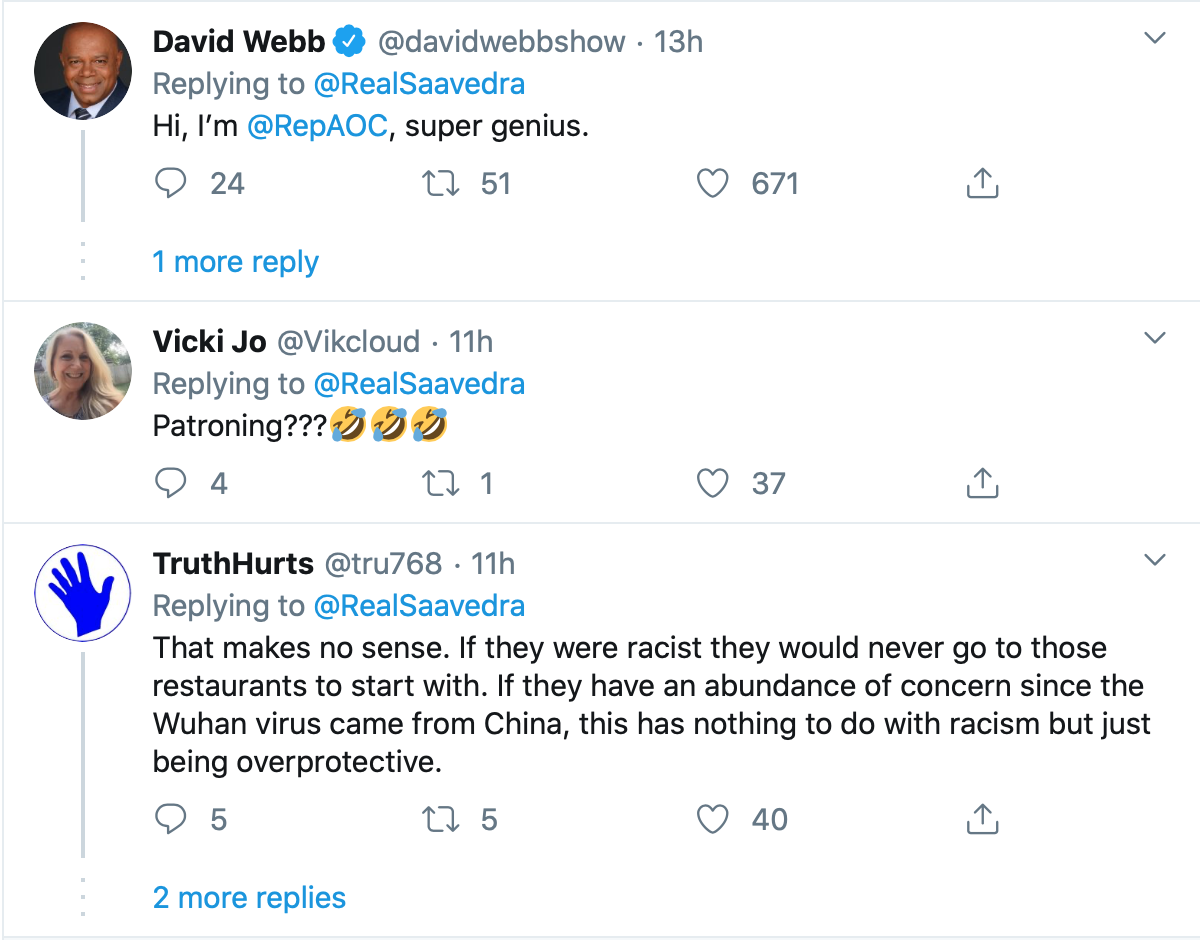 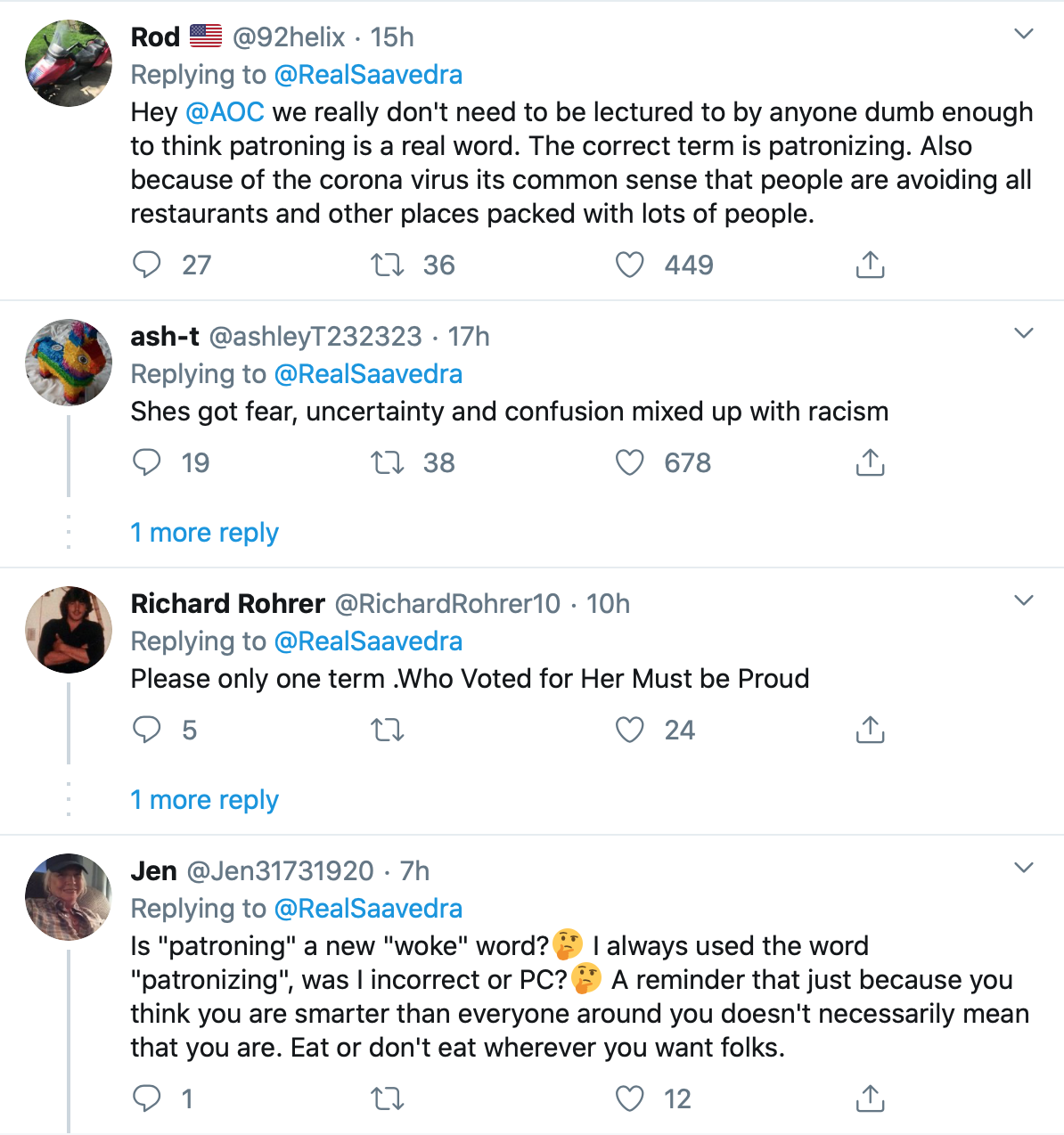 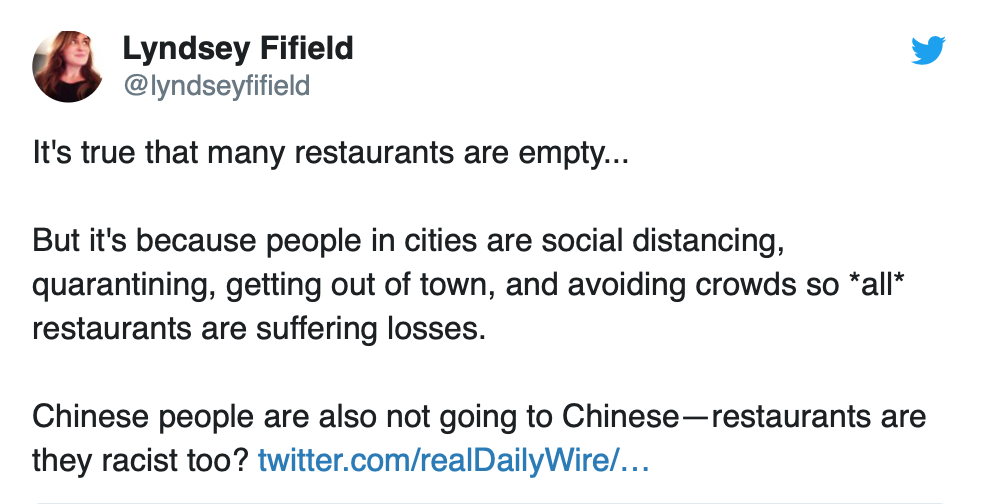 With just one tweet, AOC showed the entire nation why she has no business serving in Congress.

Truly stunning to hear some Republicans advocate for free Coronavirus testing and treatment for the uninsured.

Rep. Ted Yoho (R-Fla.), one of the most anti-ACA members:

“You can look at it as socialized medicine, but in the face of an outbreak, a pandemic, what’s your options?”

This applies to pandemics and it should apply to any condition or care you need. https://t.co/bpwvIj5sL0 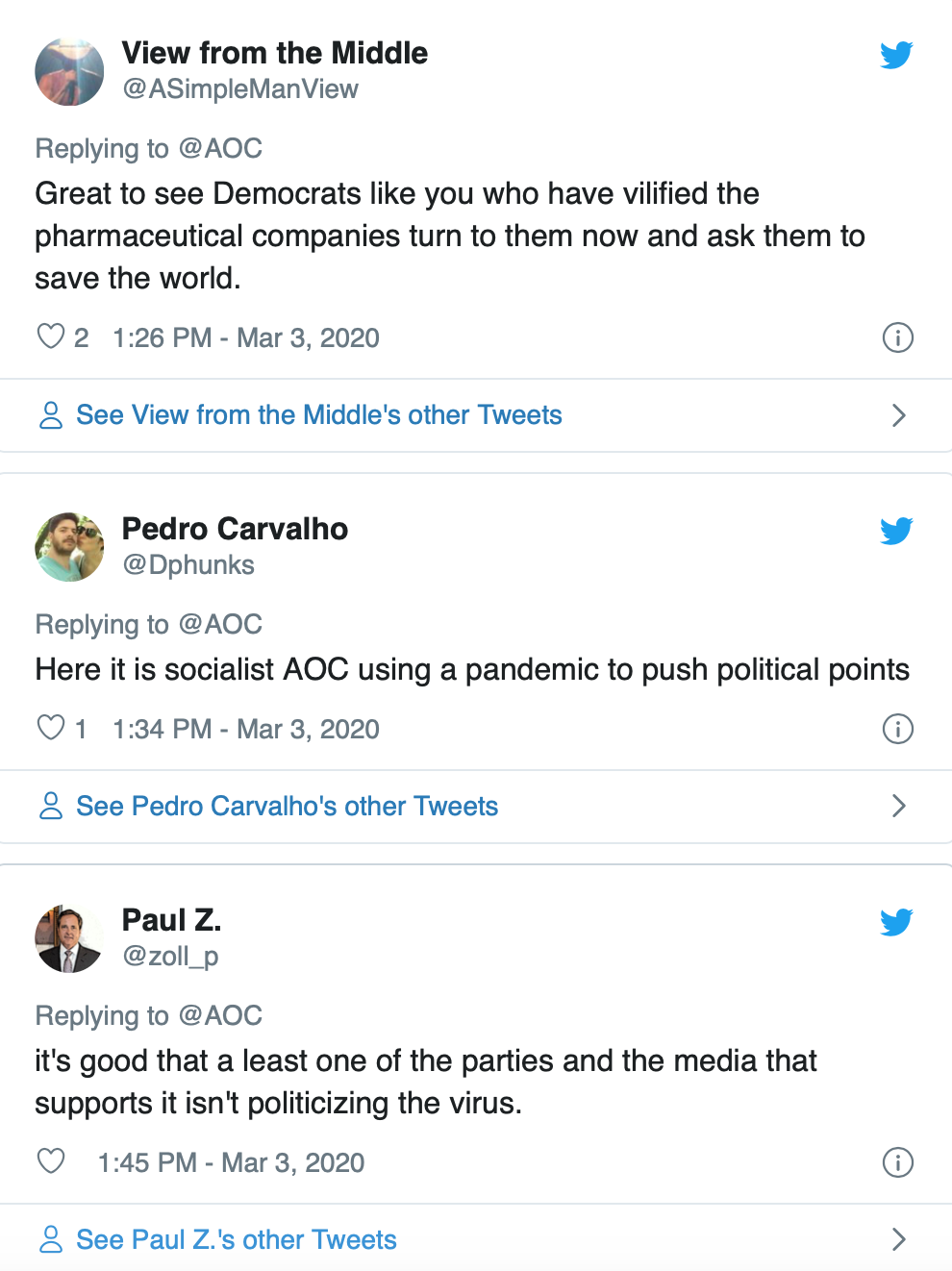 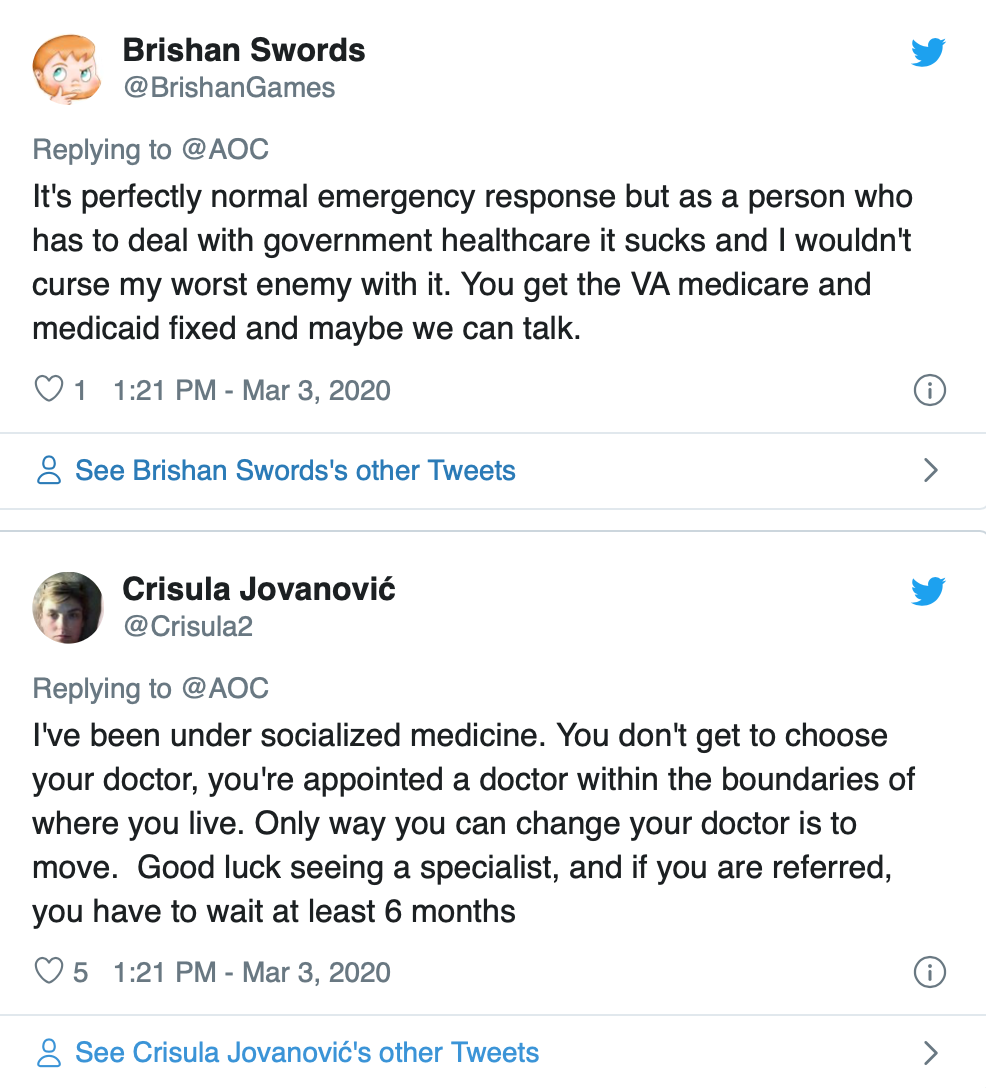 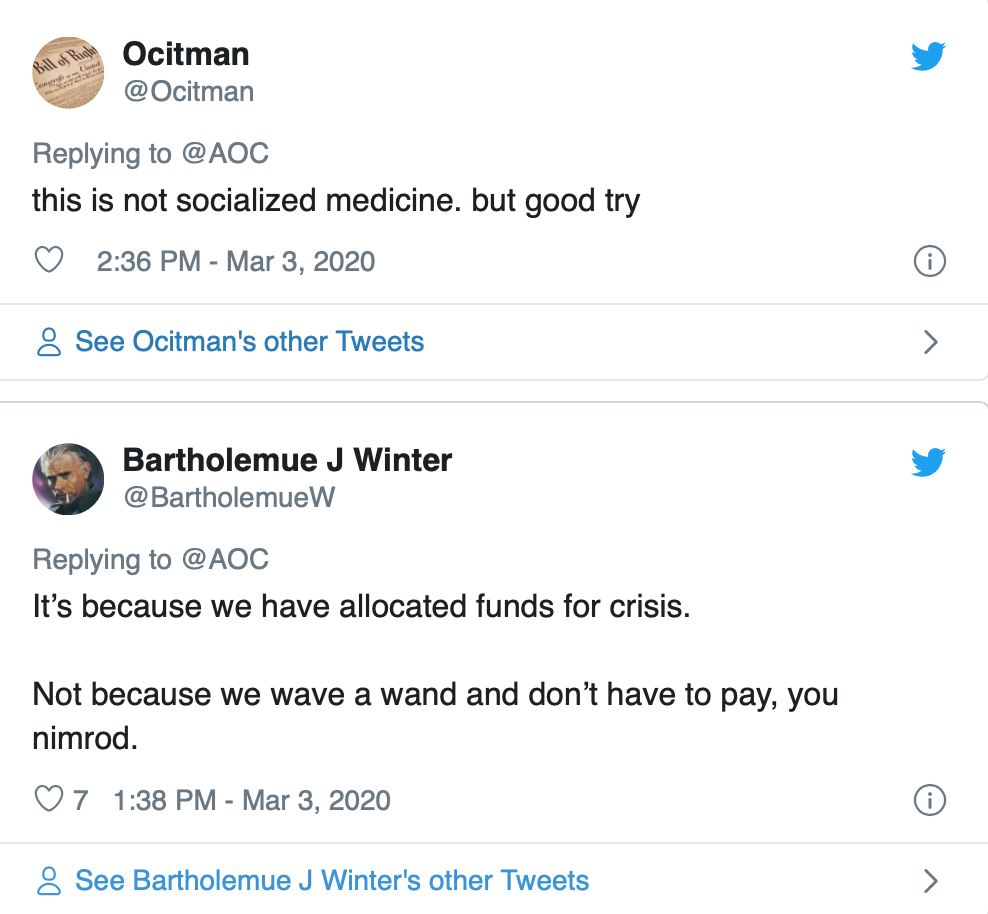 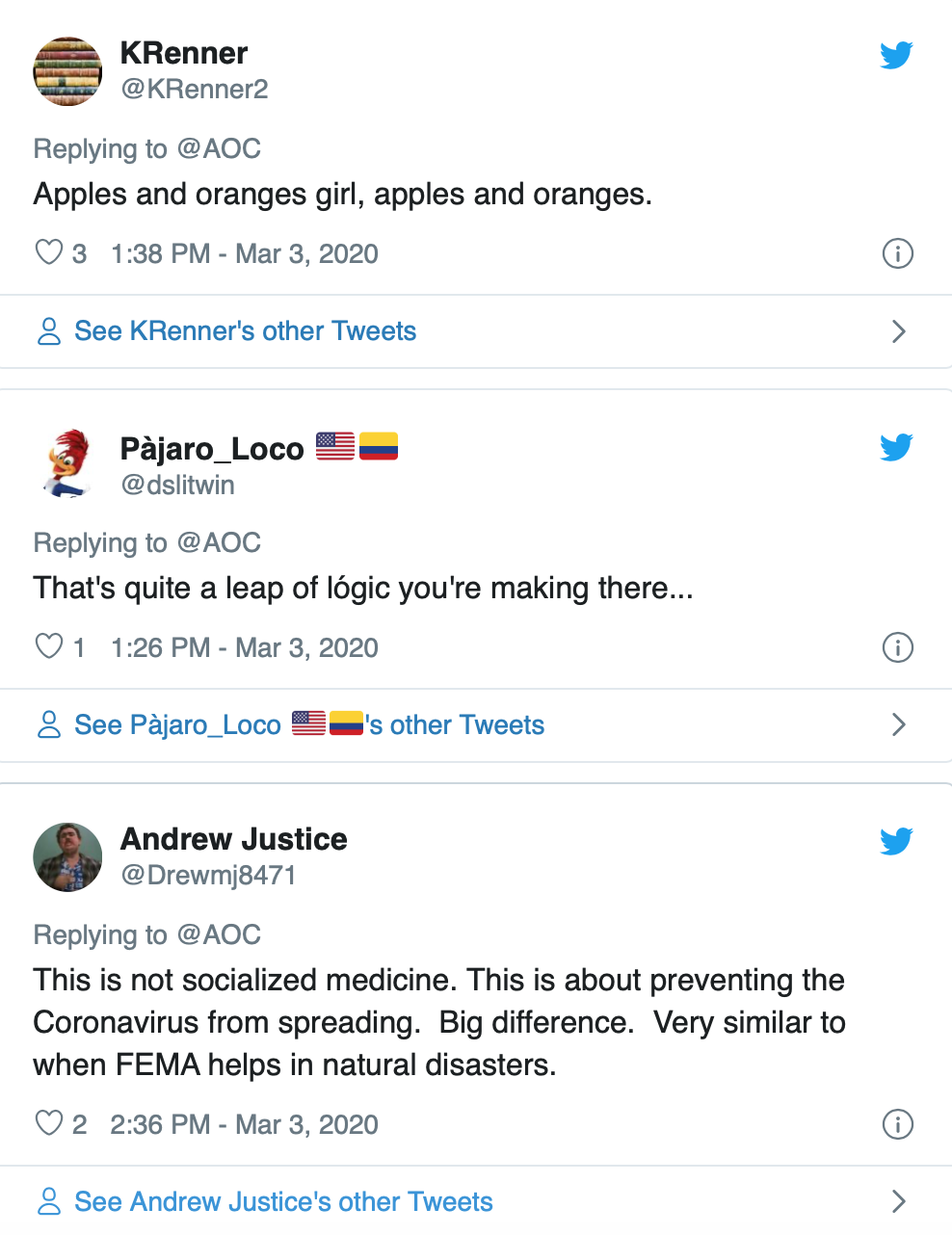 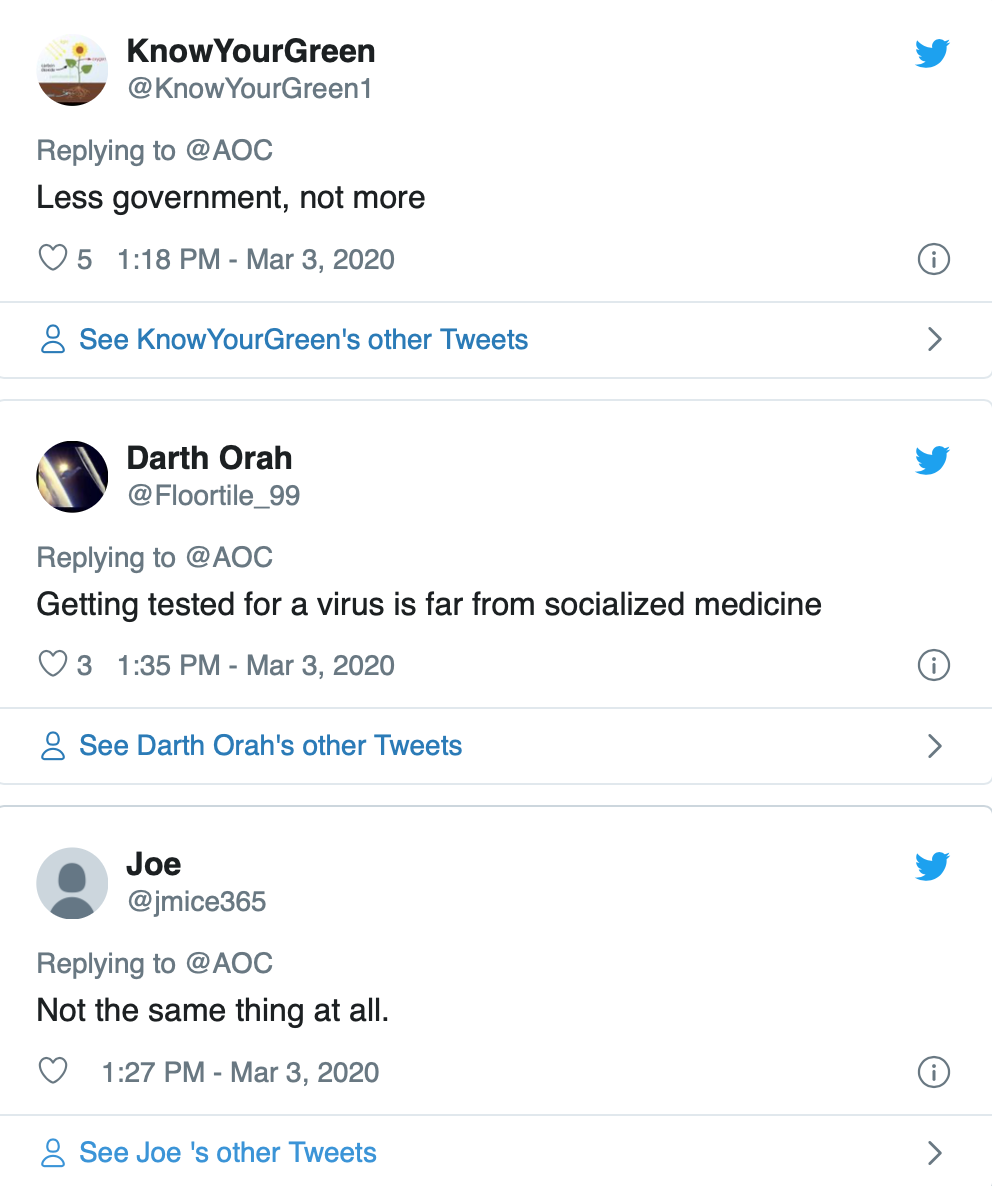 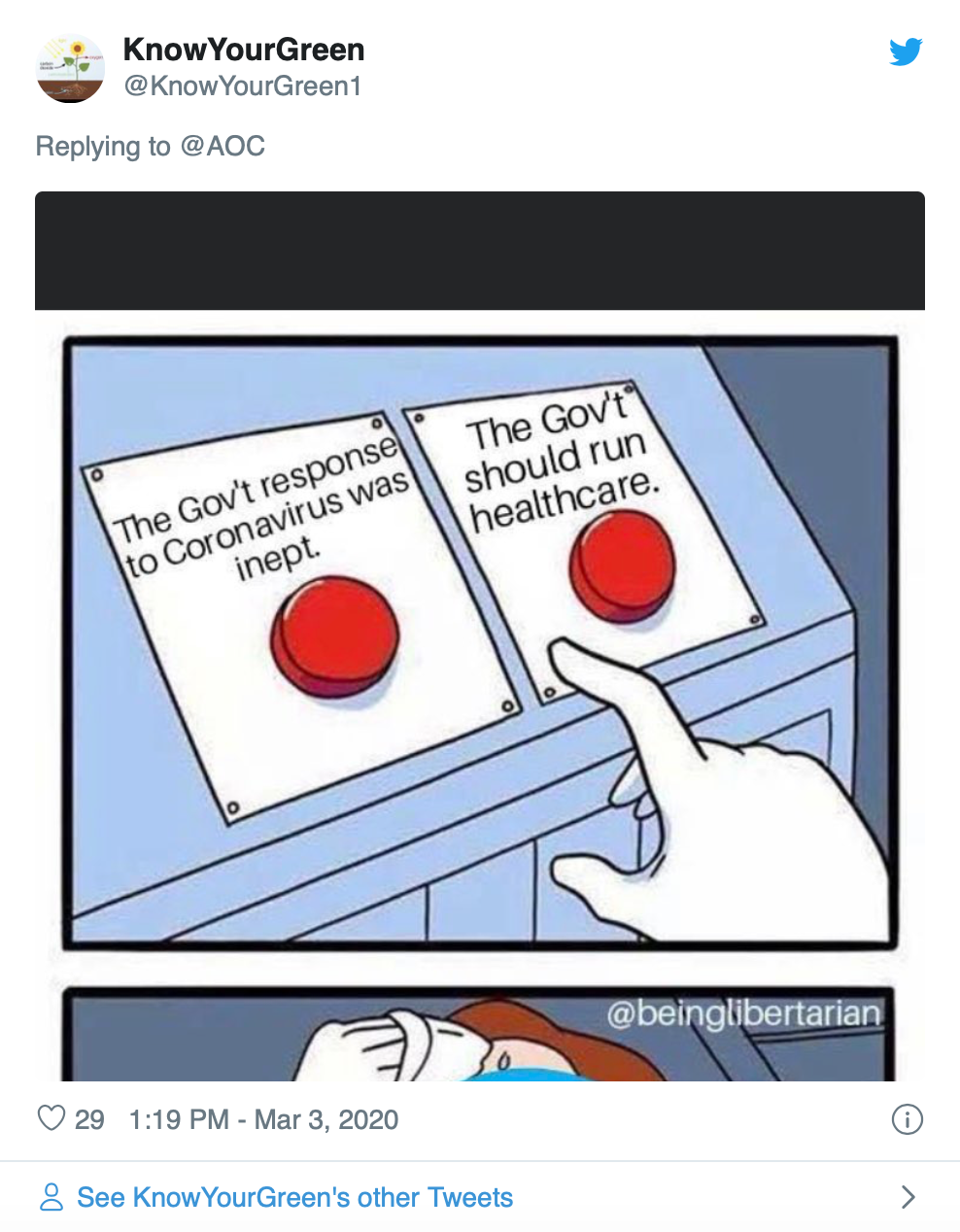 More on Alexandria, via MSN:

As for her support of Sanders in the 2020 presidential race — she said Sanders is not only running for president, but running to represent a broader, multi-racial, multi-generational movement.

“If you attend one of Bernie’s rallies, you will see this movement in action,” she said. “He can expand the electorate, he can win over independent voters. He is the strongest candidate in head-to-head polls against Donald Trump. He is our best bet in November.”

Even though the stock market continues to break record after record, Democrats still have to find a way to make it seem as if it isn’t a big deal; that President Trump’s policies had nothing to do with it; generally, that America is evil.

Inequality in a nutshell. https://t.co/hD1g1y4uBk

I am convinced that her Twitter account is some kind of social experiment. No human can be that dumb.

Not that I expect accuracy from AOC, but wages are growing at the highest rate in a decade and over 50% of Americans own stocks in one form or another. https://t.co/vp2SpmmwE9

Wages for the lowest quartile is rising the fastest in decades.

Is she ever right about anything? https://t.co/og3f5mnpkA

She just meant in her district.

In other news:
Wages are up and unemployment is down.

Prominent Democratic congresswomen AOC has a hammer and sickle currently stuck in her butt, surgery is scheduled for the second Tuesday of next week. https://t.co/XaO2gzN5o8

401Ks are tied to the Dow Jones, so peoples retirement savings just went up. https://t.co/lZaO0Fcjmc

You went from a low paying job as a bartender to a $174K a year job, and STILL you whined that you couldn't pay your DC rent.

Went to your head mighty quickly, didn't it?

No worries here, you'll be back in the taqueria by the end of the year.

Has anyone taught her that the Dow Jones industrial average is an index and not directly related to wages? In a nutshell she's crazy… https://t.co/9nnJfudUz0

Actually wage growth, especially for low wage earners, is growing faster than it has for more than a decade. https://t.co/qyRq3BGusJ

Ignoring the reality that 401Ks, employee and teacher retirement funds, etc are tied to it, that it's an indication of a roaring economy that benefits most, and that wages are increasing faster than inflation…if it wasn't for all the illegals and refugees wages would grow more. https://t.co/25jnrTJJPq

Continue reading: AOC: People Aren’t Eating At Asian Restaurants Because They Are ‘Racist’ About Coronavirus ...

“Racist”? Or perhaps they don’t like asian food. That word is no longer a word.