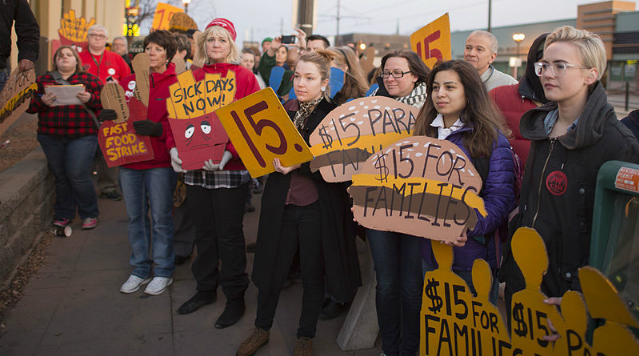 The Virginia General Assembly recently passed a bill that will incrementally increase the current minimum wage in the state to $12 per hour by the year 2023, if Gov. Northam signs off the bill, which he is expected to do.

The bill was approved almost along party lines, as Democrats were supportive of the measure, but the GOP opposed it, which is not surprising at all, especially given how economic facts have proven that a hiking the minimum wage does more harm than good.

This version of the minimum wage bill came out of a joint conference committee with House and Senate Democrats who disagreed on how the minimum wage increase should affect lower-income regions of the commonwealth. The compromise bill essentially tables this debate until 2022.

The initial House version, House Bill 395, sought to increase the minimum wage to $15 per hour across the entire state, while the initial Senate version, Senate Bill 7, sought a regional approach, which would have increased the minimum wage to $15 per hour only in the wealthiest parts of the states. Lower-income regions would have had their increases tied to the average regional salary.

The compromise bill contains a provision designed to pave the way for increasing the minimum wage to $13.50 by 2025 and $15 per hour by 2026, but first requires legislative action. Lawmakers will have the opportunity to approve these two increases by July 1, 2024. If they do not approve the increases by 2024, then the $12 minimum wage would just be tied to inflation.

The problem with increasing the minimum wage is that, while it looks good on paper, it actually doesn’t do anything to help folks who are in those jobs make a better living wage. It actually does the opposite.

When the minimum wage is increased, that’s more money coming out of the pocket of the business owner who has to find some way to absorb the extra expense so as not to hurt the profitability of the business and keep it running.

Not to mention that folks just starting out in the workforce will find it more difficult to get entry level experience they need to establish a work history as business owners will want to be more cautious about who they hire with such a high wage, wanting folks with experience instead of taking on those who have none.

Stupid is what stupid does, vote for double the hourly wages and expect life to be better. With either Democrat who says they’ll raise your taxes especially when you fall into that tax bracket you’ll find that every paycheck is not as good or as good as your previous check or the unemployment line with some of your work mates because layoffs or closed doors. Think before you vote Democrat, their after your taxes, the greedy party.