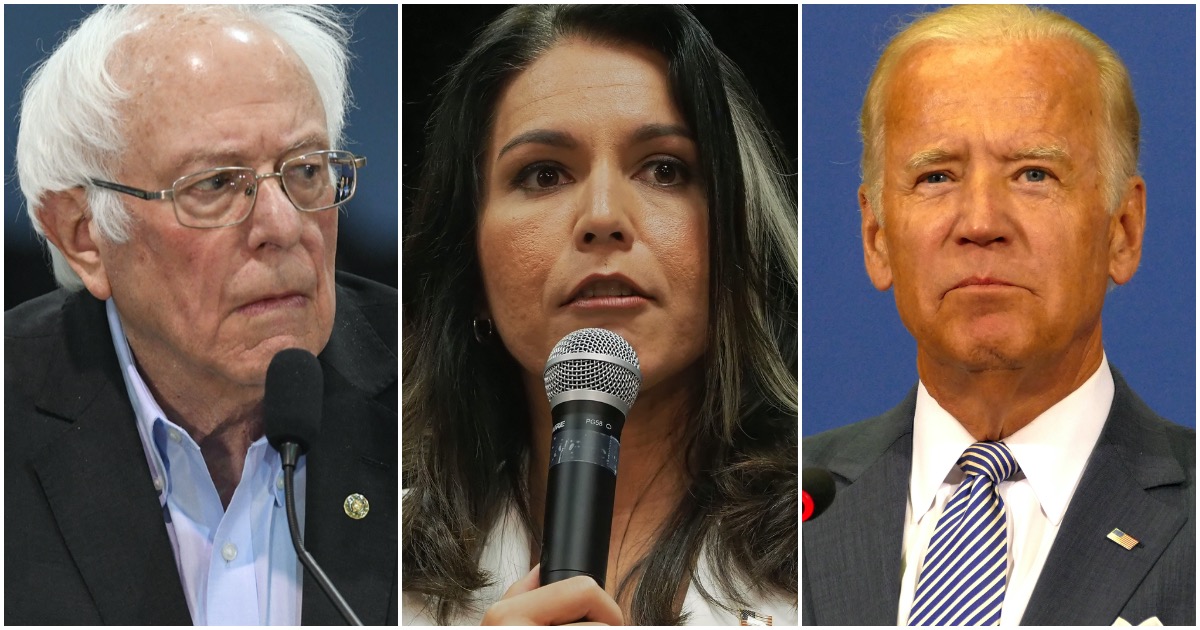 Democrats will have to choose between former Vice President Joe Biden and current Vermont Democrat Socialist Senator Bernie Sanders to be their party’s new standard bearer.

Many liberals are not thrilled with the prospect of deciding between two old, rich, white millionaires. But that’s where we are.

Now, the Democrat National Convention has ruled out allowing Hawaii Rep. Tulsi Gabbard, the lone woman remaining in the 2020 presidential race, to participate in the next debate.

Just in: The DNC announced the threshold for the next debate (March 15) and it'd be virtually impossible for Tulsi Gabbard to make it.

Candidates will need 20% of all delegates awarded thus far – she has (delegate, <1%).

The Democratic National Committee (DNC) on Friday announced new qualifying standards for the upcoming Arizona debate that will leave only the top two contenders on stage.

Rep. Tulsi Gabbard (D-Hawaii) did not meet the single qualifying factor: earning at least 20 percent of the delegates awarded as of March 15.

Sen. Bernie Sanders (I-Vt.) and former Vice President Joe Biden are the only candidates who have qualified for the debate, which will be hosted by CNN and Univision on March 15 in Phoenix.

Clinton thinks Gabbard is a Russian asset who is being groomed for a third-party run.

Why? Who else is thinking this?

Oh well. Hillary’s gonna be Hillary no matter the day.

Great! Thank you @HillaryClinton. You, the queen of warmongers, embodiment of corruption, and personification of the rot that has sickened the Democratic Party for so long, have finally come out from behind the curtain. From the day I announced my candidacy, there has been a …

… concerted campaign to destroy my reputation. We wondered who was behind it and why. Now we know — it was always you, through your proxies and …

… powerful allies in the corporate media and war machine, afraid of the threat I pose.

It’s now clear that this primary is between you and me. Don’t cowardly hide behind your proxies. Join the race directly.

Tulsi Gabbard to respond to Hillary Clinton’s comments at 630pm Eastern, from the University of Iowa’s homecoming parade. I wonder if Clinton didn’t just give the Gabbard campaign a major break — or its exit music.

OUT: Daenarys Targaryen, Breaker of Chains, Khaleesi of the Great Grass Sea, and Mother of Dragons

IN: Hillary Clinton, Queen Of Warmongers, Embodiment Of Corruption, and Personification Of Rot https://t.co/gnf1LD0vdb