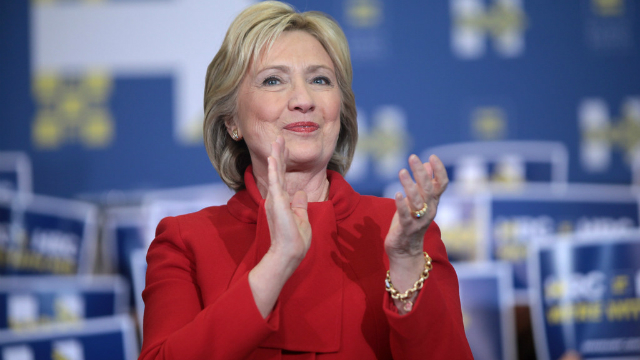 The following article, Hillary Clinton Says Trump Has Done ‘Nothing’ Right, Calls Him ‘An Authoritarian In Training’, was first published on Flag And Cross.

Former Secretary of State Hillary Clinton, who lost to Donald Trump in the 2016 presidential election, has doubled down on her statement calling President Trump an “authoritarian in training” who hasn’t done anything right since he took office.

You know, it seems to me there is a lot of American citizens who have a different take on the presidency of Donald Trump, especially those helped by his tax cuts and who have enjoyed increasing prosperity as the president’s policies paved the way for getting folks back to work.

Here’s more on this from The Washington Times:

“I stand by this assessment,” the twice-failed presidential candidate tweeted Wednesday afternoon. She was referring to a tweet quoting her from an interview a day earlier.

I stand by this assessment. https://t.co/AcaLi3LdQG

On Tuesday, Mrs. Clinton told NPR’s Audie Cornish that the president is “an authoritarian in training” who wants to undermine the rule of law, “destroy our institutions” and “set us against each other.”

“Nothing,” Mrs. Clinton answered. “Nothing.”

“From the very first day, I had hoped he would be better than I feared,” she said. “When I sat on that platform for that inauguration and I heard the speech he gave, which was divisive, violent language — the carnage in the street, setting Americans against one another — I just could not believe it.”

Clinton went on to comment on the outcome of Super Tuesday’s primary results which saw former Vice President Joe Biden make a heck of a comeback against his main opponent, Sen. Bernie Sanders.

“The hand wringing is just not necessary. I see this as signs of a vigorous Democratic Party. I see this as the energy that we need to take the fight to Donald Trump and try to elect Democratic senators and hold the House and everything else that so many people are working hard to achieve.”

The former secretary of state went on to say she is “more energized” and “ready to take on” the forces she believes are trying to tear this country apart from both the left and the right, noting she is “sick of divisiveness and destructiveness in our politics.”

Well, to be honest, the political left is largely responsible for the divisiveness we’re experiencing in this country, especially since creating that division was part of the Democrat strategy to wreck the nation and rebuild it as a socialist nightmare.

It seems Hillary’s wounds over losing that last election will just never heal.

Continue reading: Hillary Clinton Says Trump Has Done ‘Nothing’ Right, Calls Him ‘An Authoritarian In Training’ ...

Everything she says are lies. She is deceitful and venomous. She is also still angry he won the presidency and she did not.

Hey Killary, just go back in your cave. NO one wants to listen to someone like you, if they have a brain, ever again.

For”doing nothing right” he certainly has improved America, and hasn’t even sold America’s nuclear fuel “for personal profit” as old hillary did while sec of state nor abandoned Americans in world trouble spots.

Does Hillary really think anyone takes anything she says as fact,she is probably the crookedest person to every run for president and the number one biggest liar next to Adam Schiff who lies even when he is asleep,much of what he has done has been right,starting with removing the Government regulation that were stifling the economy,this is nothing more than sour grapes on Clintons part,she should not be believed on any level., yes may she die soon and deliver us from her evil.