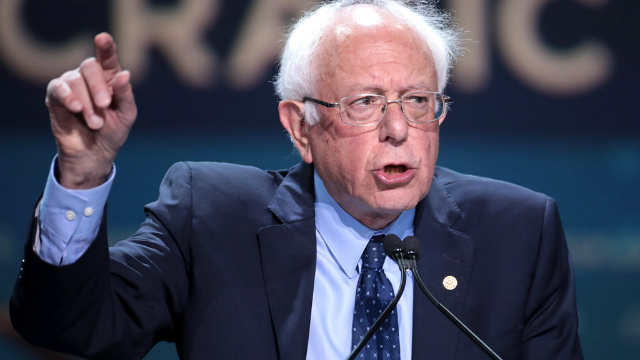 The following article, Bernie Sanders Goes Off About Media ‘Venom,’ Says Dem Establishment ‘Working Frantically To Try And Defeat Us’, was first published on Flag And Cross.

Democratic presidential candidate Sen. Bernie Sanders was hoping for a much better outcome for Super Tuesday, especially since he had been riding high after some big wins and good showings in other state primaries, but things didn’t really go that way.

Former Vice President Joe Biden hammered out quite a few big wins on Tuesday, allowing him to make a legendary comeback — which the Democratic Party surely had nothing to do with, right? — and possibly pull the rug out from beneath Bernie’s feet.

Sanders has now come out and criticized the media during his first remarks with the press after losing 10 states to Biden in the Super Tuesday primaries.

“There has never been a campaign in recent history that has taken on the entire political establishment, and that is an establishment which is working frantically to try and defeat us,” the Vermont senator said in a press conference on Wednesday. “And there’s not been a campaign, I think, that has been having to deal with the kind of venom we’re seeing from some in the corporate media.”

He referenced a CNN segment with the chyron “Can Either Coronavirus or Bernie Sanders Be Stopped?” and then-MSNBC host Chris Matthews comparing Sanders’s Nevada caucuses win to the 1940 Nazi invasion of France.

“This campaign has been compared to the coronavirus on television. We have been described as the Nazi army marching across France,” Sanders said.

Sanders then turned his aim to the former vice president, acknowledging that he and Biden are “basically neck and neck” in delegates after Super Tuesday. Results from the contests are still being calculated, but the Associated Press projects that Biden now has 566 delegates while Sanders has 501. A candidate needs 1,991 delegates to win the Democratic presidential nomination on the first ballot.

Sanders went on to say that Biden is a “decent human being,” but claimed he is “heavily supported by the corporate establishment” in the Democratic Party.

He then went on to attack Biden’s support for what he called a “dysfunctional and cruel” healthcare system. Obviously, what Sanders really wants is for healthcare to be completely under the control of the government in a single-payer system, regardless of how badly such a system functions in practice.

Sanders went on to say, “What this campaign, I think, is increasingly about is, which side are you on? Does anyone seriously believe that a president backed by the corporate world is going to bring about the changes in this country that working families and the middle class and lower-income people desperately need?”

Sanders isn’t necessarily wrong. The establishment within the Democratic Party is most definitely out to make sure he doesn’t win the nomination, and for good reason. As foolish as the Democratic Party has been over the last few years since Trump took office, they know that a socialist candidate would more than likely mobilize more independents and even quite a few Democrats to jump ship and vote for Trump, essentially sealing the deal for his re-election.