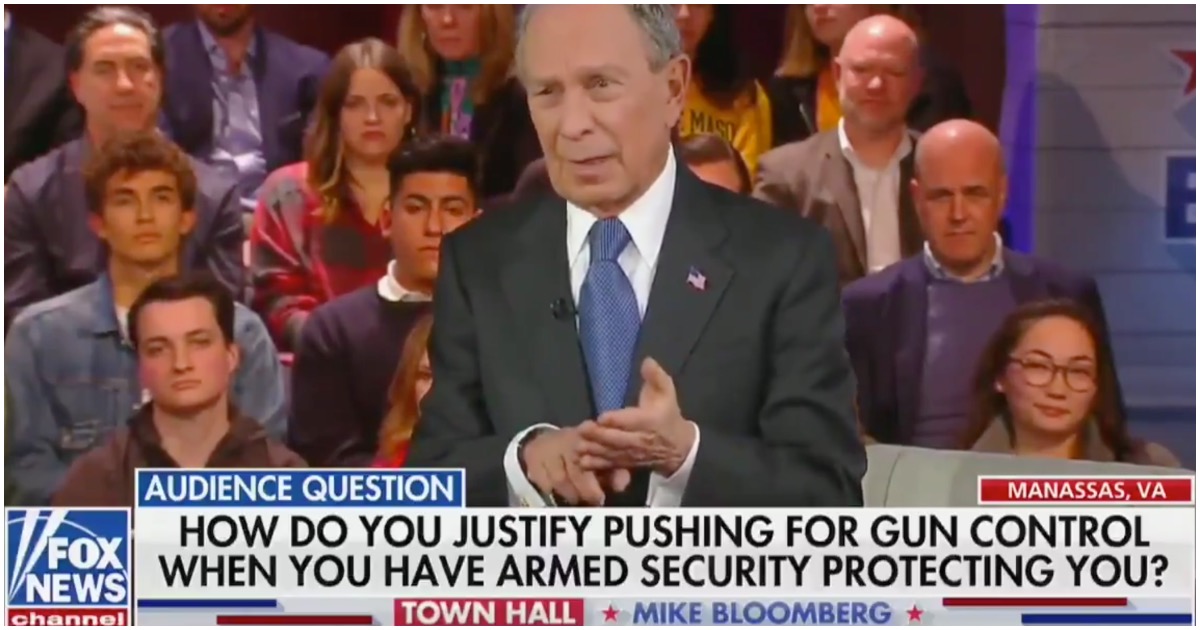 The following article, Bloomberg Asked About Hypocrisy of Armed Security, Says He’s Wealthy & Can Afford It (Watch), was first published on Flag And Cross.

2020 Democrat presidential candidate Michael Bloomberg was asked if his life matter more than those of the average citizen during a Fox News town hall. In short, “Mini Mike” seemingly dodged the question and said he faced more threats than others due to be wealthy and the mayor of New York City.

In other words, yes, Mike’s life is more valuable and deserves to be safeguarded by retired police officers because he has the ability to pay for his detail.

Check it out for yourself, via Free Beacon:

Democratic presidential candidate Michael Bloomberg incorrectly asserted Monday that background checks are not required to be performed on gun sales done at gun shows or over the internet.

Michael Bloomberg is ENDED by a citizen on gun control:

"You have an armed security detail that is likely equipped with the same firearms and magazines you seek to ban the common citizen from owning. Does your life matter more than mine or my family's?" pic.twitter.com/LawKcwJEwl

He never directly answered the question in this clip and essentially told the guy “Yes, my life is more important because I’m rich and famous. I get death threats all the time.”

because the poors never get death threats right?

Bloomberg is the best argument I’ve ever seen for wealth confiscation.

And Bloomberg’s initial response infers yes, his life is more important, as a wealthy man and presidential candidate.

you want to grab my guns while your own security guys carry them, why should you have more rights than I do
YEAH UM HELLO I'M RICH AS HELL https://t.co/ZzOgHMl3lj

Bloomberg told MacCallum and Baier that, if elected, he would also end another one of Trump’s customs.

A Bloomberg administration would be visibly lacking in West Wing tweets.

Mike certainly isn’t expected to win the far-left party’s nomination this summer, at least not by himself.

But if he added Hillary Clinton to the mix he might give himself a slightly better chance.

Former Bill Clinton adviser Dick Morris is warning Bloomberg, though. He’s telling Mike to be careful what he’s asking for.

To: Mike Bloomberg: Before you put Hillary on your ticket, better hire a taster

Doesn’t really seem to matter which one of those liberals/socialist candidates you wish to vote for as all of them have a agenda which includes taking guns away from Americans. Some are merely more vocal while others are hiding their intentions.

Dumbass Bloomersberg ought to read the 2nd A. Especially the part that states “shall not be infringed”.
I pray this ignorant SOB loses.

I sure wish these guys would give an answer to the questions they are ask instead of skirting around them. But it’s easy to this guy just like all professional politicians are liars.