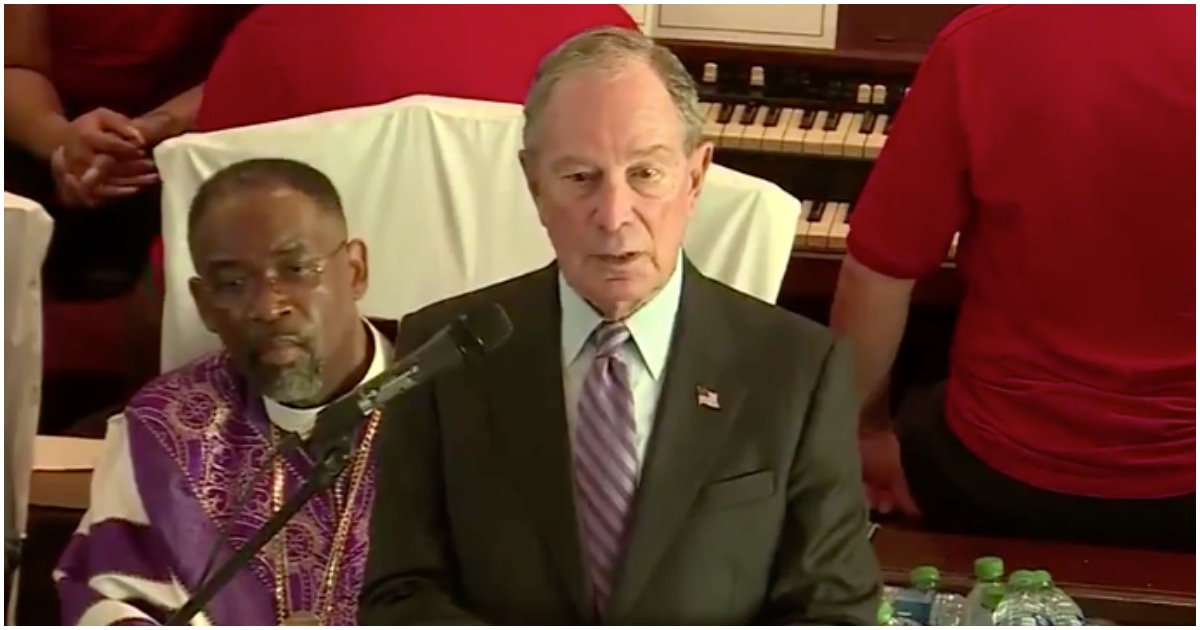 The following article, Watch: Black Churchgoers Turn Their Backs On Bloomberg In Silent Protest During Speech, was first published on Flag And Cross.

It’s not a great time to be Democrat presidential candidate Mike Bloomberg, you know, aside from the billions in the bank and all. The guy just can’t seem to gain any momentum, despite now having made it to the debate stage with the other liberal candidates.

At the end of the day, the former New York City mayor, like pretty much every other 2020 hopeful, is just not all that popular with Americans. What happened at a church on Sunday should make Bloomberg think things over.

According to a report in the New York Daily News, several members of Brown Chapel African Methodist Episcopal Church stood up and turned their back on Mr. Bloomberg as he was was speaking.

Images of the protests posted to social media showed at least eight congregants in several clusters standing with their backs facing Mr. Bloomberg.

Members of a congregation turned their backs to Mike Bloomberg as he spoke at a church in Selma, AL. pic.twitter.com/wuSP1mVjJR

Meanwhile when Biden came into the church, he was immediately seated behind the altar alongside Rep. Sewell, Sen. Jones, Stacey Abrams and Rev. Sharpton. Bloomberg is sitting in the first pew of the congregation

Sewell said that Biden has “earned the right to sit at the pulpit” pic.twitter.com/Lh65gZtTEs

While promoting a $127 million, three-year initiative to help minorities in the workplace in 2011, then-New York City Mayor Michael Bloomberg declared that there’s “this enormous cohort of black and Latino males” who “don’t know how to behave in the workplace” and “don’t have any prospects.”

Speaking to PBS in the 2011 interview, Bloomberg noted that he had donated $30 million from his foundation to Open Society Foundations, the network established by liberal billionaire financier Goerge Soros, toward the new plan to enhance employment among minorities.

Bloomberg on Black and Latino males between 16-25: pic.twitter.com/kaJpr46Tro

Mike on the elderly:

Dems don’t want you to know being denied care is the reality of the government-run healthcare they want.

Bloomberg was the first to slip & admit it:

If you're 95 years old & have cancer, "we should say go & enjoy…there's no cure & we can't do anything." pic.twitter.com/VXJNH3XetK

Democrat presidential candidate Michael Bloomberg said in March of this year said that he was *too old* to run for president and that he would not be successful “unless I was willing to change all my views and go on what CNN called ‘an apology tour’” pic.twitter.com/ENu1DMSims