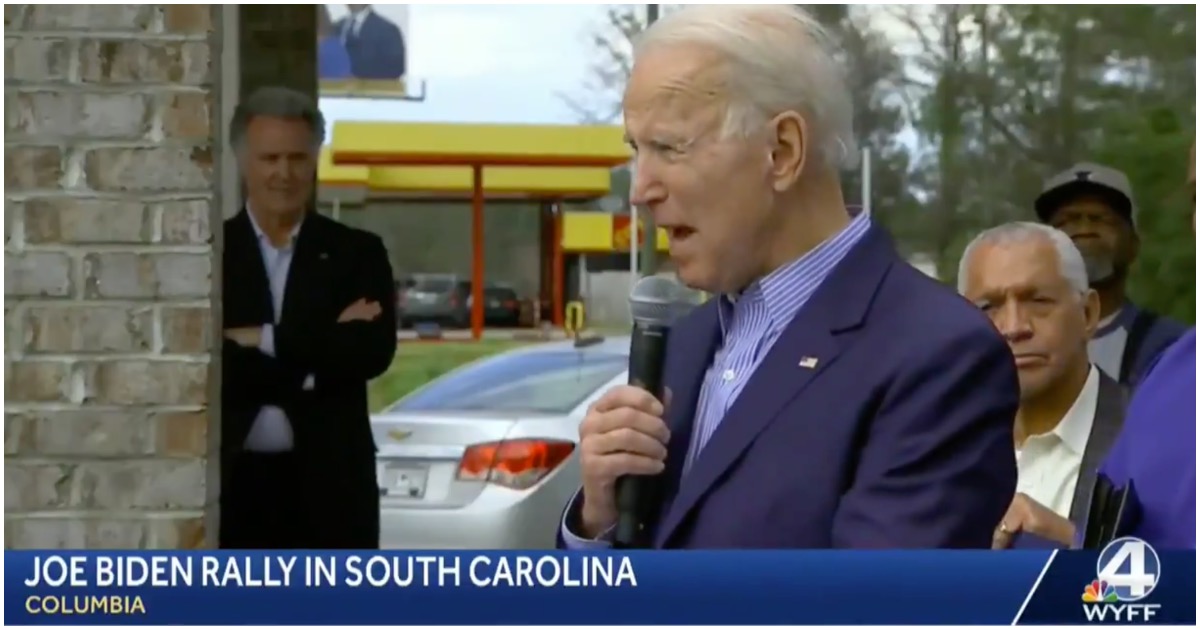 The following article, ‘Can’t Make This Up!’ Biden Speaks to Crowd While In ‘North South Carolina’ — Video, was first published on Flag And Cross.

It would be funny if it wasn’t sad. But at this point, it seems blatantly evident that 2020 Democrat presidential candidate Joe Biden is in no position to be even running for office.

Early signs of dementia? Possibly. But gaffe after gaffe, day after day, it’s time to hand up the cleats, old man. Enjoy your millions are ride off into the sunset. Can you really crave power so much that you’re willing to make yourself look like a complete fool on a daily basis?

Tough to watch play out.

President Trump got rid of Obamacare’s individual mandate for a reason. It was a joke. People hated it.

Joe doesn’t care, though. If he becomes president (on his third try), he’s going to bring it back.

Joe Biden, former vice president and 2020 Democratic presidential hopeful, said Friday he would bring back the individual mandate, the penalty for not having health insurance, which was a pillar of the Affordable Care Act.

Biden played an integral part in crafting the ACA, commonly known as Obamacare. However, President Donald Trump eliminated the individual mandate in 2017 by signing the Republican tax bill, effective the 2019 tax year.

Biden: "If you provide an option for anybody who in fact wants to buy into Medicare for All, they can buy in… But if they like their employer-based insurance, which a lot of unions broke their neck to get… they shouldn't have to give it up" https://t.co/tDM9CsVNv8 pic.twitter.com/sQw4q65gou

Biden may just be the most gaffe-prone individual in American political history.

His comments over the decades on everything from race to gays and everything in between speaks volumes, yet he’s given a pass by the MSM thanks to being a Democrat.

Check out what happens when these students are told President Trump made racist comments, only to learn the words actually came from Biden’s lips…

Continue reading: ‘Can’t Make This Up!’ Biden Speaks to Crowd While In ‘North South Carolina’ — Video ...

Add to biden’s many years in politics during which there appears to be nothing accomplished except his corruption during which he managed to enrich himself & family the appearance that old uncle joe is sliding into old age with many signs of dementia. Time to retire joe.

Can you crave power so much that you are willing to make your self look foolish everyday,yes it is possible,all you have to do is look at the politicians who have been in office for thirty or forty years and are seventy five to eighty five years old or older,you can get rich in politics if you are crooked enough and crazy enough like Biden.

Promise you won’t laugh, but there really is a small town, in South Carolina, named “North”; it was founded in late 1800’s, by John F. North, when he brought the southern railroad through there. During the 2010 census, the town’s population was 764; you read that right – -seven-hundred-sixty-four. I don’t know what their population is today; it’s on SC state route 321 and I’ve driven through, several times, on the way to, or from Springfield, Georgia. It really doesn’t look much larger than previously mentioned, but probably is a bit,, since it’s “out in the boonies” and lots of… Read more »

stick a fork in him…