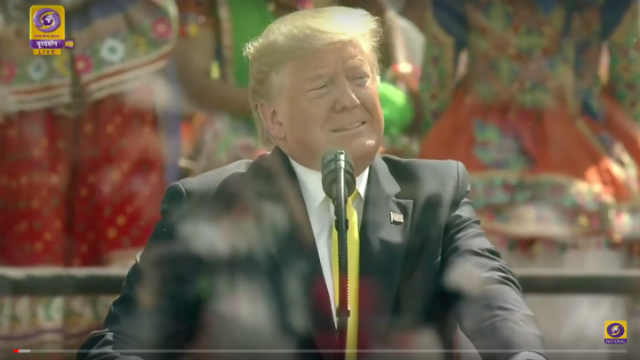 President Trump announced that India has reached a $3 billion defense deal with the United States, which includes the country purchasing several military-grade helicopters.

Trump delivered a speech on Monday alongside Indian Prime Minister Narendra Modi in the Sardar Patel Stadium, which is the largest cricket stadium in the country, capable of housing more than 100,000 people. During his talk, Trump confirmed that the U.S. had approved the purchase of several military helicopters from America as part of the larger defense deal between the two countries.

“The United States looks forward to providing India with the best and most-feared military equipment on the planet. We make the greatest weapons ever made — airplanes, missiles, rockets, ships. We make the best, and we are dealing now with India,” the president said.

He continued, “I am pleased to announce that tomorrow our representatives will sign deals to sell over $3 billion in the absolute finest, state-of-the-art military helicopters and other equipment to the Indian armed forces.”

Trump, who held a rally with Modi in Texas in September, described the friendship between the two nations as being strong. He called Modi a “great friend” and vowed that the U.S. and India would remain allies.

During his speech at the #NamasteTrump programme, @POTUS @realDonaldTrump highlighted aspects of his vision for USA. He also spoke at length about India’s greatness as well as the greatness of our culture, ethos, people and more. I thank him for his kind words. pic.twitter.com/T2trutWPqY

Both countries were due to talk about trade during the state visit, however the president stated that no deal has been finalized at this time. He spoke with reporters saying that he felt “no rush” to complete negotiations, but added that “We are doing well with India, we are making deals.”

Trump’s speech in India was accepted with warm applause from the packed out stadium. He went on to thank the crowd gathered to hear him speak for the “spectacular welcome,” saying he would never forget the “remarkable hospitality” of the Indian people.