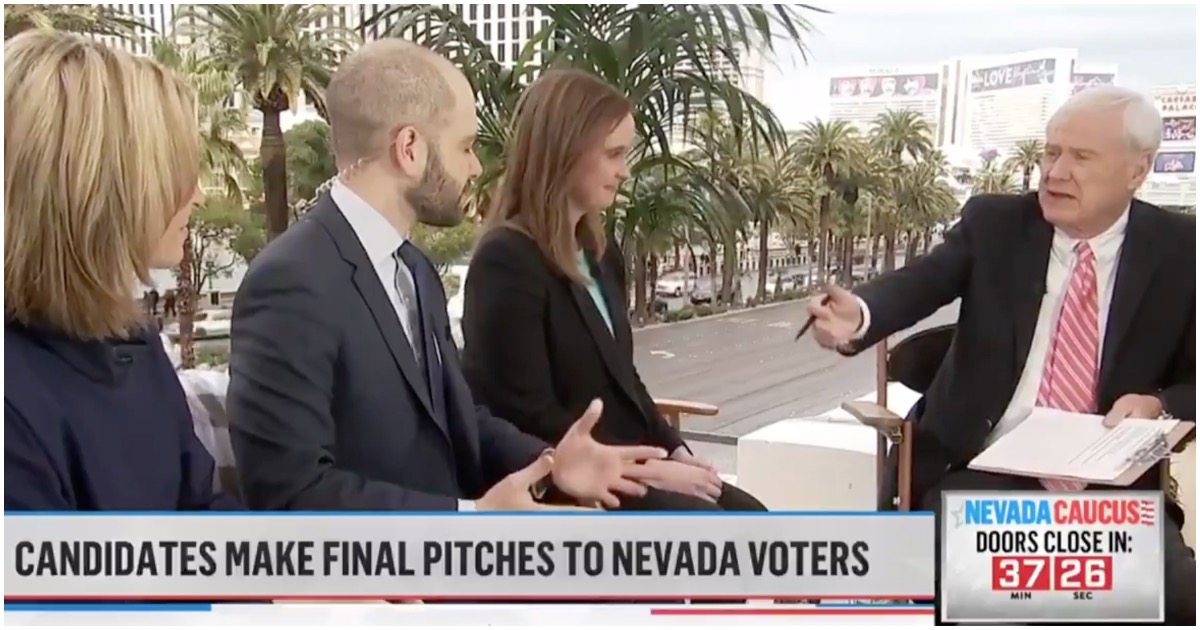 The following article, Video: MSNBC’s Chris Matthews Wonders If U.S. Better Off With Trump Over Bernie Sanders, was first published on Flag And Cross.

Chris Matthews is asking questions Democrats don’t want to answer. A lot of them know that socialism is bad for the country, but hatred for President Trump overrules their better judgment. From Washington Examiner:

MSNBC host Chris Matthews wondered if the Democratic Party would be better off if President Trump wins reelection rather than if Sen. Bernie Sanders takes over the White House.

Matthews, 74, brought up the possibility that centrist Democrats may prefer Trump over the socialist Sanders during the network’s Saturday afternoon coverage of the Nevada caucuses. The host of Hardball with Chris Matthews was leading a conversation about how centrist candidates were splitting the vote, likely a detriment to one another but a benefit for Sanders.

MSNBC’s Chris Matthews likens Sanders victory in Nevada to Nazi Germany overrunning France in 1940: “It’s too late to stop him … it’s over” pic.twitter.com/6GJetLoDkq

REACTIONS – from both sides:

The point is that although we knew they secretly thought it, it's kind of crazy for them to come out and say it.

He’s right. Bernie is just the left side of the populist coin. He would have zero congressional support and he would get sued continuously

"Oh, let's pick the socialist who had a heart attack and won't release his med records *and* turns up his nose at millions to fund a campaign!" Brilliant. Just brilliant.

Do we really need to be putting 'Mask off' in every tweet about CNN or MSNBC when we've known that they've been like this for decades now?

We are better off with Trump than ANY of the Democratic nominees. Because they are all terrible, crooked or political dinosaurs. Out of 330 million people, this was the best they could offer the American public?

I'm just so disappointed. I had high hopes for Chris.

Who needs Russian meddling when you have Chris Matthews!

There’s no such thing as “four more years of Trump”. If he has four more years to pack the courts, dismantle the civil service, and broker interference in our elections, we will never get the country back. We get him out now or become a Putin-style crony republic.

Chris Matthews started out saying he has views of socialism that he's willing he's happy to talk about in private with people and then IMMEDIATELY starts talking about how if there's socialism he's going to be executed in the middle of central park by Fidel Castro personally.

What nonsense. What poison. @HardballChris has effectively become nothing but a blabbermouth in the worst possible sense of the word.

It isn’t a good look for the left when they’ve lost Matthews. After all, this is the guy who had a “tingle” up his leg for Barack Obama.

Ultimately, Matthews, James Carville, and a couple other big name liberals are warning Dems that if they keep going further and further left, it is increasingly likely that President Trump wins a second term in the Oval Office.

But the candidates are not listening.

Chris Matthews laying it down.

Socialism is an issue in this campaign.

He doesn’t like socialism and “it doesn’t frickin’ work!”

OMG!!!! Quick president trump you need to make a campaign commercial on this NOW

I am shocked that he finally told the truth. Seriously shocked.

For as ridiculous as Bernie Sanders’ policies are, at least the guy is consistent. He makes it clear that he’s a full-on socialist and he’s not ashamed of it – for whatever reason.

What, no tingle running up matthew’s leg with old bernie? Likely he wouldn’t have had to acknowledge this if obama hadn’t had 8 years to take America down and even mccain & romney wouldn’t have been as destructive. And now we need a Trump to bring the country back on line.