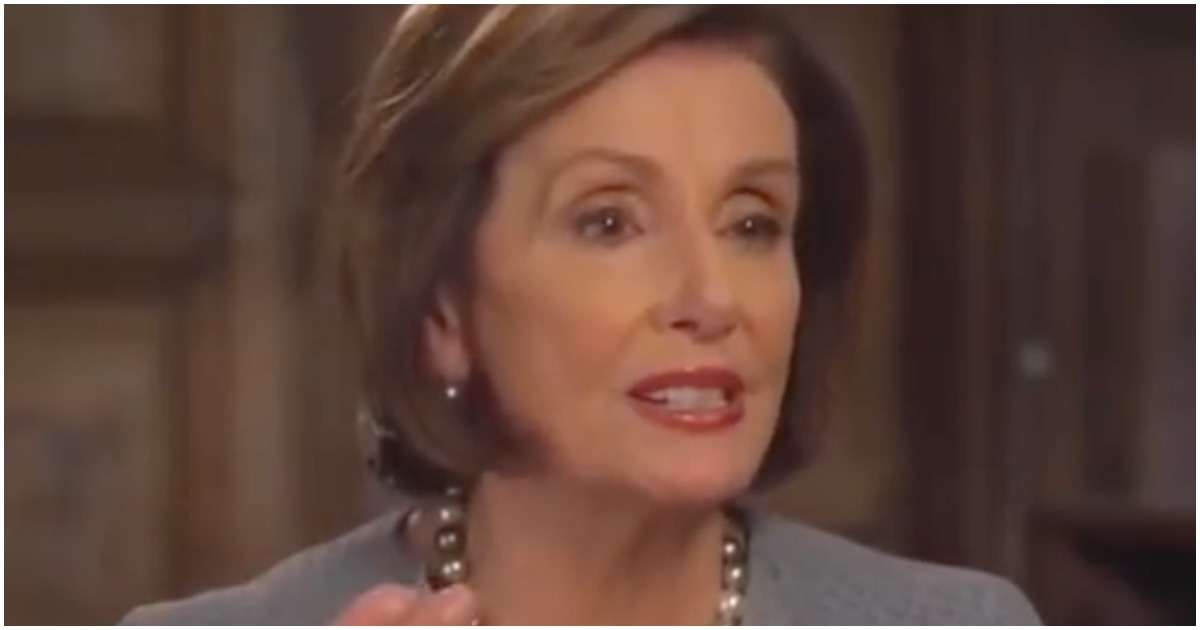 President Trump was impeached by the Democrat-controlled House of Representatives and later acquitted by the Republican-led Senate. Both of these things are true, whether some people want to admit it or not – and a lot of them don’t.

Speaker Nancy Pelosi (D-CA) is one of these people severely afflicted with Trump derangement syndrome. Her recent interview with CNN says it all. From Daily Caller:

Trump lost a brother to alcoholism. He doesn’t drink and certainly doesn’t do drugs. But Pelosi, for some crazy reason, thinks Trump might’ve been a little high during his State of the Union address.

House Speaker Nancy Pelosi (D-Calif.) accused President Trump of appearing “a little bit sedated” during his State of the Union address earlier this week when she extended her hand to shake.

Pelosi on Trump rebuffing her attempt to shake hands before SOTU: "It was also an act of kindness, because he looked to me like he was a little bit sedated." pic.twitter.com/iP9x28oMh2

Pelosi doesn’t think the president was legally acquitted, well I and a bunch of other citizens don’t think he was legally impeached in that kangaroo basement court…..

Are you just plain fucking stupid, or what?

Perhaps old nancy doesn’t know the difference between “acquitted” and “quit”? No nancy, President Trump didn’t “quited”….. but perhaps old nancy will “quited” next January 1st when she is no longer the “speaker”?

This is the crazy bitch that libtards admire.

Maxine has her beat but she is certainly working on it.

That old hag pelosi is a traitor and an enemy of the American people. Pelosi should be ousted from congress with the rest of her nazi, liberal cartel. This is a case of good versus evil and pelosi is definitely evil! Speaking of evil, that idiot bloomberg said that california was a model state. California like new york is a sewer full of worthless human refuse. Try walking down hollywood boulevard without stepping in human feces and needles. The homeless zombies are everywhere.

Pelosi is living in an alternate universe, it seems. Maybe a ship from her home planet will beam her up soon. Or they could just check her into Area 51, where they could examine her origins.

Love watching this ole twisted face lunatic going about its paces. Yeah I agree, how can one be acquitted when one hasn’t been found guilty.

President Donald J. Trump was never convicted of anything. How could he be acquitted.

8000 mile after mile and as well conflict and lastly reunite denver (KCNC) A colorado lady friend, broken down caused from your ex sister more or less 44 a long time ago throughout the confusion from your Vietnam warfare, happens to be reunited collectively younger aunt from a $99 geonomics test, will power on top of that instances. “I never thought we had arrived checking out find my personal sis, explained Berni Slowey, a mom, Busacrossesswoman along with written video brand name denver. on the internet see why Slowey prospect your younger mother, elevated, was probably suffered to loss of… Read more »