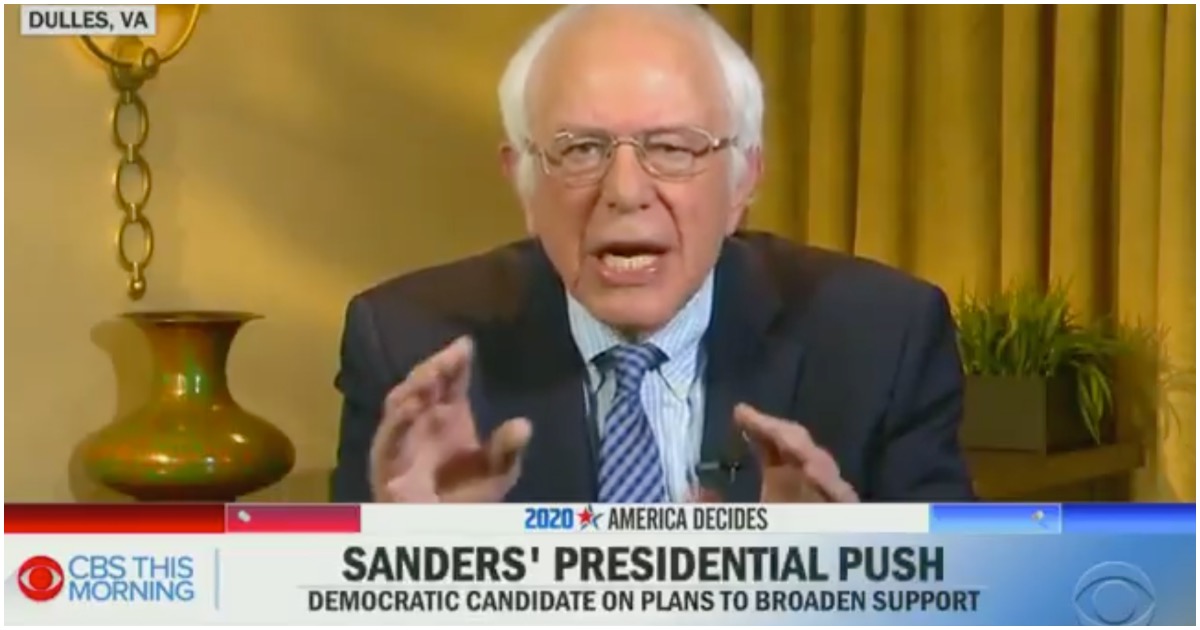 The following article, Bernie Asked If Socialism Will Hurt Him In Election, Says We’re Living Under Socialism Now (Watch), was first published on Flag And Cross.

To be a successful politician, you have to be able to spin. Even if someone asks you a point blank, direct question, you never want to answer without flipping the entire premise on its head.

2020 Democrat frontrunner Bernie Sanders (VT) has mastered his craft. He knows what to say to keep his uninformed base in the dark and that’s the way he likes it.

When asked if he thinks being a socialist will hurt him in a hypothetical general election matchup against President Trump, Bernie managed to say something completely ignorant while simultaneously thinking he’s correct.

.@BernieSanders on whether his “socialism” label will hurt in a general election:

“We’re living right now under Donald Trump in a socialist society. The only difference is, does the government work for working people or does it work for billionaires?" pic.twitter.com/gs6Gi7WWIi

NEW YORK — New York City Mayor Bill de Blasio will endorse Bernie Sanders for president — a move intended to advance his own elusive quest for national relevance while underscoring his background as a left-leaning, establishment-wary Democrat, according to people familiar with the mayor’s plans.

Though he styles himself a political risk-taker, the mayor is only taking the plunge after Sanders emerged victorious from the Iowa caucuses and New Hampshire primary, rather than when the Vermont senator’s chances seemed more tenuous last year.

Planned Parenthood founder Margaret Sanger was big into eugenics. She fought for abortion in order to keep the minority population low.

When asked about overpopulation, Bernie noted: “The answer has everything to do with the fact that women in the United States of America, by the way, have a right to control their own bodies and make reproductive decisions. And the Mexico City agreement which denies American aid to those organizations around the world that allow women to have abortions or even get involved in birth control to me is totally absurd.”

He added, “So I think, especially in poor countries around the world, where women do not necessarily want to have large numbers of babies, and where they can have the opportunity through birth control to control the number of kids they have [is] something I very, very strongly support.”

Imagine, old bernie as “president” and his “VP being de blasio”? And America’s name being changed to “New Venezuela”?