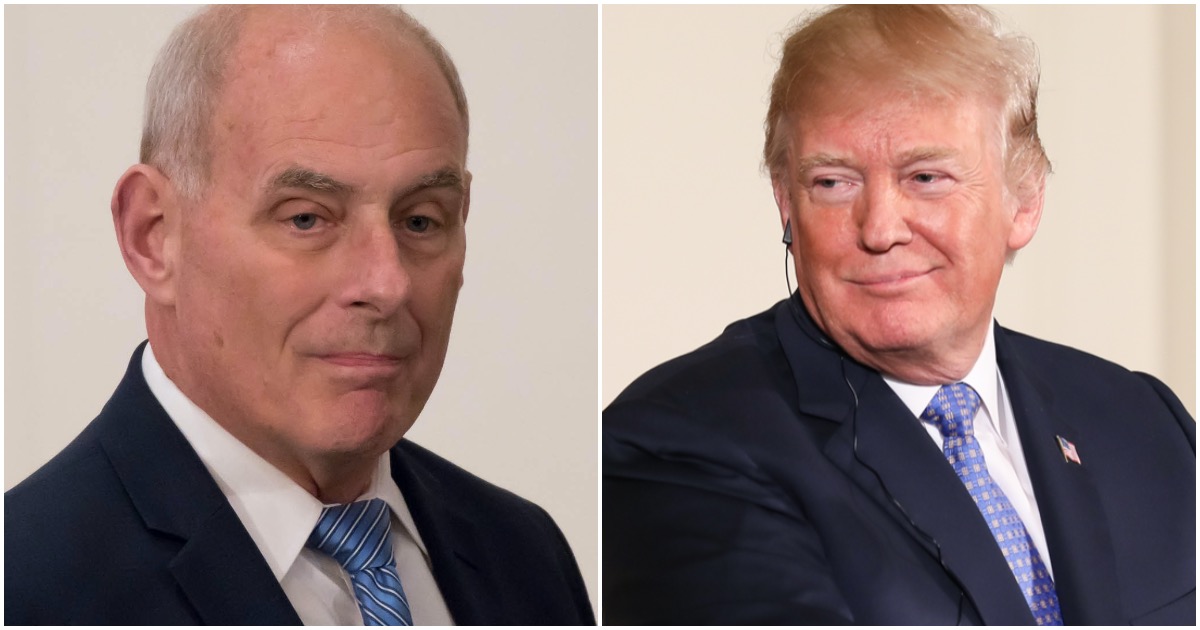 The following article, Trump Fires Back At John Kelly After Former Chief of Staff Slams POTUS for Firing Vindman, was first published on Flag And Cross.

John Kelly replaced Reince Priebus as President Trump’s chief of staff what seems like eons ago. So much has happened since Kelly left his post. Likewise, Kelly hasn’t been very supportive of POTUS in that time.

On Thursday, Kelly called out Trump for firing Lt. Col. Alexander Vindman from the National Security Council. Trump wasn’t thrilled about that.

“He did exactly what we teach them to do from cradle to grave,” Kelly said at an event at Drew University in New Jersey, according to The Atlantic. “He went and told his boss what he just heard.”

The remarks from Kelly, a retired Marine Corps general, come after Vindman was removed Friday from his role as the top Ukraine specialist on the NSC and escorted from the White House grounds. Vindman’s twin brother Yevgeny, who served as a senior lawyer on the NSC, was also forced from his post.

When I terminated John Kelly, which I couldn’t do fast enough, he knew full well that he was way over his head. Being Chief of Staff just wasn’t for him. He came in with a bang, went out with a whimper, but like so many X’s, he misses the action & just can’t keep his mouth shut,.

….which he actually has a military and legal obligation to do. His incredible wife, Karen, who I have a lot of respect for, once pulled me aside & said strongly that “John respects you greatly. When we are no longer here, he will only speak well of you.” Wrong!

1. Kelly has a real hate on for the president.  And he basically regurgitates the media and Democrat attack lines against the president, which is why Mediaite amplified his comments.

2. If he despised the president so much why did he accept the chief of staff job after having served as DHS secretary?https://t.co/8ThhjDZBTS

BREAKING: White House is weighing plan to dismiss Alexander Vindman from National Security Council after he testified in impeachment inquiry, a move that will be part of a broader effort to shrink Trump admin foreign policy bureaucracy, sources tell me & @nwadhams. Story out soon

President Trump’s presidential campaign, which is getting geared up for the 2020 election, also took a few shots at Vindman and his testimony.

Trump campaign communications director Tim Murtaugh posted on Twitter saying, “He disagreed with the president. Hate to break it to Adam Schiff and the Democrats but the President of the United States sets policy, not unelected bureaucrats. And policy disagreements are not impeachable offenses.”

Trump didn’t fire Vindeman,according to what I read he was reassigned,but even if he had,so what,Kelly needs to go away and stop trying to be a prima donna,Vindeman made up part of his story and was said to be undisciplined,why must the presidents every move be questioned by some low level flunky who has an axe to grind,Trump makes a simple phone call and ever tom dick and harry has a problem with it,how about everyone do their own damn job and let him do his and stop judging him by their own opinion,we know what was said and nothing… Read more »

Seems that the non-conservatives have conspired to deny President Trump the powers that all Presidents have had since 1776, the right to have people in his cabinets and in the Whitehouse that he can depend upon to not be stabbing him in the back. So now will this power be denied to future Presidents, even dem presidents if that should ever happen again, or just President Trump?

It looked like President Trump picked a good Chief of Staff when he put John Kelly in that position. However, we have since learned that he is not one to be trusted to be a loyal employee. He says Vindman did what he was trained to do. I wholeheartedly disagree with this because Vindman is not supposed to undermine his boss by going behind his back and making up lies about a phone call the president made to the president of Ukraine. Vindman thought the president should have used the talking papers he made for him and when he did… Read more »