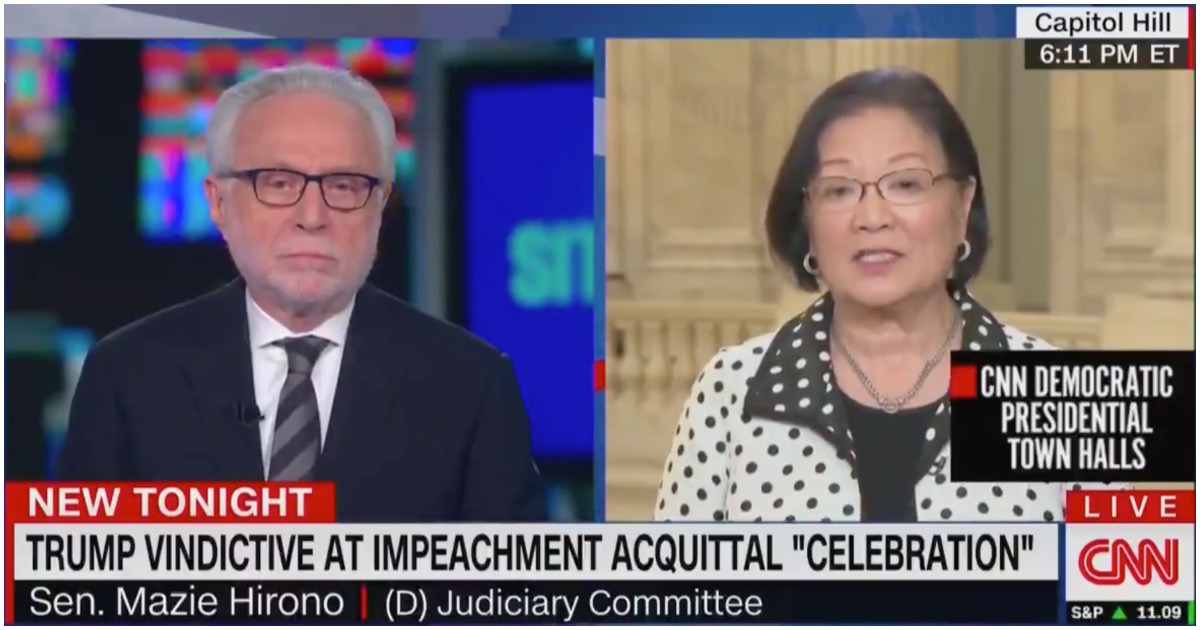 The following article, Dem Senator Goes On CNN, Falsely Claims President Trump Was ‘Not Acquitted’ (Watch), was first published on Flag And Cross.

President Trump was acquitted in the Senate. On both counts – obstruction of justice and whatever else it was Democrats conjured up. According to a far-left Senator though, POTUS was not acquitted.

Isn’t it great how Dems live in their own world? Their hatred for Trump overrides everything, especially love of country, considering how well things are going in the Trump economy.

Democratic Senator Mazie Hirono (HI) falsely claimed on Thursday that President Donald Trump was not acquitted yesterday when the U.S. Senate fully acquitted him of all impeachment charges that he faced from House Democrats.

Someone needs to start referring these delusional #Democrats to psychiatrists. I seriously believe they are stuck in psychosis.

Hirono is the poster child for why voting out stupid is needed. Unless of course the people of Hawaii are really proud of this running joke of a representative.

So, the #Democrats rig a PARTISAN impeachment and then claim the Senate rigged the acquittal of the rigged impeachment?!

DO THESE PEOPLE EVEN LISTEN TO THEMSELVES?

In this case, CNN stooped down to interview this person instead of the other way around, that is very rare.

Micheal Avenatti was about at an equal level. Just as crooked at Mazie but not stone cold stupid.

During an interview with MSNBC on Friday, Mazie said it didn’t matter what “Constitutional defenses” Trump’s legal team came up with because of course Trump is guilty of… something.

Democrat leaders want to destroy the Constitution in order to impeach @realDonaldTrump.

“I don't care what kind of nice, little, legal, Constitutional defenses that they came up with.” – Dem Sen. Mazie Hirono

That’s wrong on so many levels.pic.twitter.com/Wweiul4Zuj

The main problem with Democrats is that it’s hard to take them seriously. If they’re not being overtly hypocritical then they are saying something incredibly ignorant.

You know the drill.

Hirono is one of the worst members of Congress Democrats have to offer. She’s constantly wrong on the issues but thinks she’s right, which makes it all the more awful.

Last November, she said something so ridiculous it should make moderate Democrats switch teams immediately.

Prayer breakfast? These people wouldn't know a bible if someone hit them over the head with it.

Even they know the science doesn't support their claims, so now they have to treat it as a religion to keep people reeled in. All to hide that it is a massive money and power grab that will hurt the poorest people most.

Well it is a cult. A scientist just lost her job because she reported polar bear populations are good

No end to those dem morons and their acts and claims.

Bald Headed do-nothing but smoke Hawaiian Chronic…..! should be thrown into a volcano for spewing lies….!