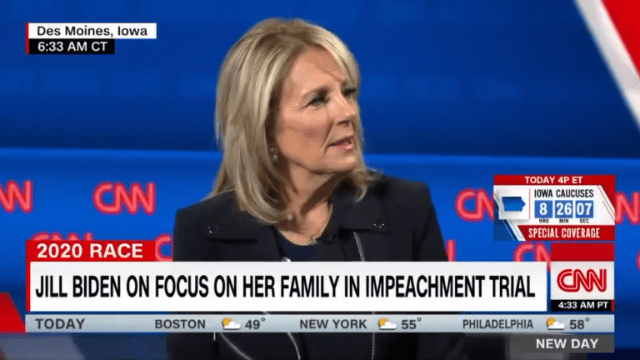 The following article, Jill Biden Says Her Family Is No Longer Friends With Lindsey Graham, was first published on Flag And Cross.

The modern state of politics in America is the most divisive its ever been, with people viciously attacking one another verbally, and even sometimes physically, over a difference in thought and belief. Many people have lost family and friends over hot button issues, including, apparently Joe and Jill Biden.

According to Mrs. Biden, her family is no longer friends with Republican Sen. Lindsey Graham, claiming “he’s changed.”

Jill Biden addressed the end of the family’s friendship with the South Carolina senator during a Monday morning interview on CNN’s New Day with John Berman. The anchor brought up Graham’s role in the impeachment process, in which Democrats have accused President Trump of improperly withholding security aid to Ukraine in order to pressure Kyiv to investigate possible corruption by the former vice president.

Berman said he thought Jill Biden considered Graham “as a friend,” but she corrected his statement to the past tense, indicating the relationship had soured.

Jill Biden added, “Well, you know, Lindsey — I don’t know what happened to Lindsey. And we used to be great friends and friends with John McCain. I mean, we traveled together with the Foreign Relations Committee. We’ve had dinner. You know. And now, he’s changed.”

The host then asked if she still considered him a friend, and Jill Biden answered, “You know, it’s hard when you — I don’t know — consider somebody a friend, and they’ve said so many things, so many negative things. And it’s — that’s been a little hurtful.”

Her comments about Graham come after the South Carolina senator made a promise to investigate the Bidens and their ties to Ukraine.

“I don’t think it is wrong for us to look at the Biden connection to the Ukraine,” Graham said to reporters a week ago.

“So the president is frustrated, and I am frustrated that we live in a country where only one side gets looked at,” he continued. “And I am telling you now that I am going to look at this if nobody else does. And that does not make me a Russian agent.”

Now, while it seems horrible to see friends split in such a manner, Graham is obviously trying to do his job and also keep his voter base appeased by his actions, so none of this should be a surprise to the Bidens.

Having friends while working in politics seems like a precarious situation, especially if you’re not playing on the same team. It takes truly special, grown up, mature people to make a relationship like that work, and unfortunately, there’s not much of that going around in our world today.

Not even the republicans consider the Do nothing but Back-Stabbing Queer as a friend….! Always on T.V. promising this & that…. but nothing happens…. He’s going to subpoena this Guy & that Guy …. but nothing happens….! Only thing he’s good for is Back-Stabbing the republican party in the Tahooda…. Just like his Mentor & Master…. Thumbs-Down McStain….!