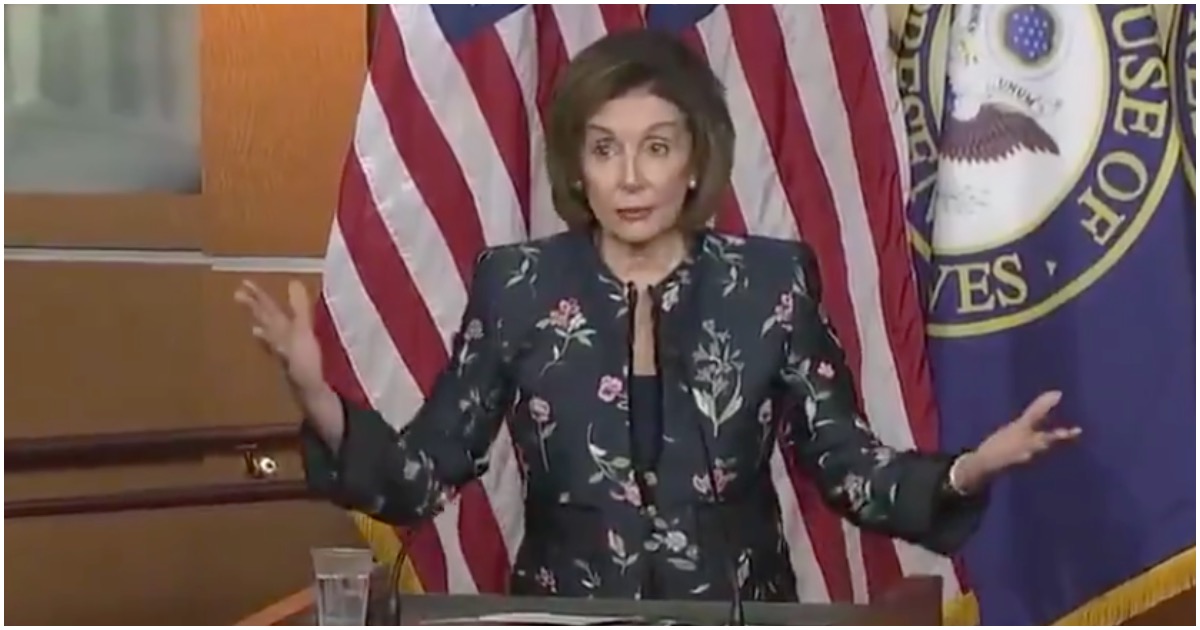 The following article, Pelosi: If Senate Votes to Acquit President Trump He Still ‘Will Not Be Acquitted’ [Video], was first published on Flag And Cross.

Speaker Nancy Pelosi said something very silly on Thursday afternoon. Go figure, right? It’s as if Democrats continually try to one up each other with the silly talk and nobody comes out a winner.

According to Nancy, even if the Senate votes to acquit President Trump, POTUS still “will not be acquitted.” What could that mean? Dems are set to impeach in the House again, already? What a headache.

Check out CNN’s Jeffrey Toobin slamming the president’s legal team for being too white. And yes, it is as ridiculous as you’d imagine.

Here's that clip of Toobin mocking the Trump legal team as "White House and white people" and "a lesson in the diversity of the two parties" (so ignoring how all lead 2020 Dems are white) He also went the sexism route, wondering if the female lawyers will be "allowed to argue" pic.twitter.com/R5dD2MqFBQ

Jeffrey Toobin was just criticizing the #TrumpDefense team for being all white men. Seriously.

If that’s the best counter they can come up with, I’m pretty sure Trump is going to be just fine. Enjoy!

How do you know that President Trump's team totally annihilated all Democrat arguments?

Because CNN is talking about how the President's team is "too white."

This is how unhinged the left has become. Fake News CNN criticizes Trump's legal team for being "too white." I'm not kidding. And not one liberal will denounce this trash on CNN. #Shampeachment #Trump #CNNisGarbage #MakeAmericaGreatAgain #CNNIsFakeNews #ImpeachThis https://t.co/I4CpxHLOun

Continue reading: Pelosi: If Senate Votes to Acquit President Trump He Still ‘Will Not Be Acquitted’ [Video] ...

Does she feel the same way about Slick Willie? I don’t think she does. She’s only going to be Speaker until January, she should start thinking about her move to a smaller office.

Pelosi truly thinks she is the one in charge of our government and laws. She’s always acted like she is above her subjects, the people of the USA. Thank God she is getting old and this will probably be her last time in office.

In her mind he won’t be acquitted , but in the minds of the We The People he will be acquitted and exonerated, in the clear, of all false accusations this sham has produced…A plus to the acquitel will be that it has made up the minds of even some democrats to vote for the President’s re-election in 2020.

Miss Nancy: Oh, yes he will too, – be acquitted. On the other hand: he will NO LONGER be impeached!!! You can blame yourselves for your disappointment. You should not have tried to impeach someone with not a scintilla of evidence. All just trumped up allegations!!! Hopefully you have learned your lesson. THAT IS: IF you get to remain in your position. I have an idea you will be the next one to resign and go back to civilian life – to become just another ordinary citizen. I wouldn’t be surprised if all three of you – yourself, Mr. Adam… Read more »

For-Ever Sloshed Alcoholic Holy Junkie should be de-frocked and Sued for harassing the President….! Or she should save the nation and President Trump’s legal Team the trouble and drown herself in Hillary’s toilet next to Hillary’s Server….!

Nancy Nonsense speaks falderal and balderdash. She will be replaced, and return to the land of poop and piss.

An all white team complaint? So the Dems now have the audacity to think they can tell others who to privately hire for a defense against legal difficulties – by some super-secret race/gender formula?