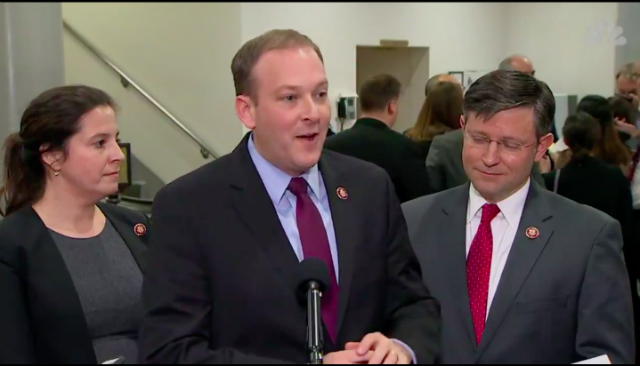 The following article, NBC Reporter And Republicans Go Toe-To-Toe After They Were Asked For Examples Of Ukrainian Corruption, was first published on Flag And Cross.

Some Republican members of Congress got into a rather tense exchange of words with an NBC News reporter after she asked them some questions about Ukraine, including one about wanting examples of corruption in the country.

Reps. Lee Zeldin of New York, Elise Stefanik of New York, and Mike Johnson of Louisiana gaggled with reporters on Tuesday when NBC’s Heidi Przybyla asked for an example of Ukrainian corruption of concern to President Trump that doesn’t relate to him personally.

They tussled with the reporter as she asked them to explain the corruption the president was concerned about besides allegations surrounding the Bidens and the Crowdstrike theory. The president referenced both in his July 25 phone call with Ukrainian President Volodymyr Zelensky, which was the catalyst behind his impeachment.

Zeldin started to answer the question but then said, “If I give a good answer, that doesn’t mean that you have to cut me off, OK? I know that if I give a bad answer, you’d probably let me go all day.”

Zeldin was getting ready to answer the question he was asked, but then decided to ask if other reporters had different questions.

Przybyla said, “I know it’s a hard question,” and added that Trump “is not on the record mentioning anything other than Biden and Crowdstrike, and you haven’t mentioned anything else.”

“I’m happy to answer your question, but all I was asking was, because you have a lot of colleagues here,” Zeldin replied. “You guys want the answer, right?”

Other reporters in the group shared their agreement with Przybyla, to which Zeldin responded, “OK, I’m happy to, but just, you have a unique style, OK, and it’s one that might not be as, I mean, you’re not looking around to see if anyone else has any other questions.”

The mainstream media is definitely not in the good graces of the Republican Party and have not been so for a very, very long time. Perhaps what news organizations like NBC and CNN need to do is go back to being objective and providing people with real facts instead of fabricating stories for the sake pushing an agenda and getting ratings.

If they want to win back viewers, they will have to return to a strict standard of journalistic ethics, otherwise, Fox News will continue to dominate.

WATCH: @HeidiNBC presses Reps. Zeldin, Stefanik and Johnson during a tense exchange about her tough questioning style on a question about corruption in Ukraine as it relates to the Senate impeachment trial. pic.twitter.com/tJj44JOPrc

Continue reading: NBC Reporter And Republicans Go Toe-To-Toe After They Were Asked For Examples Of Ukrainian Corruption ...