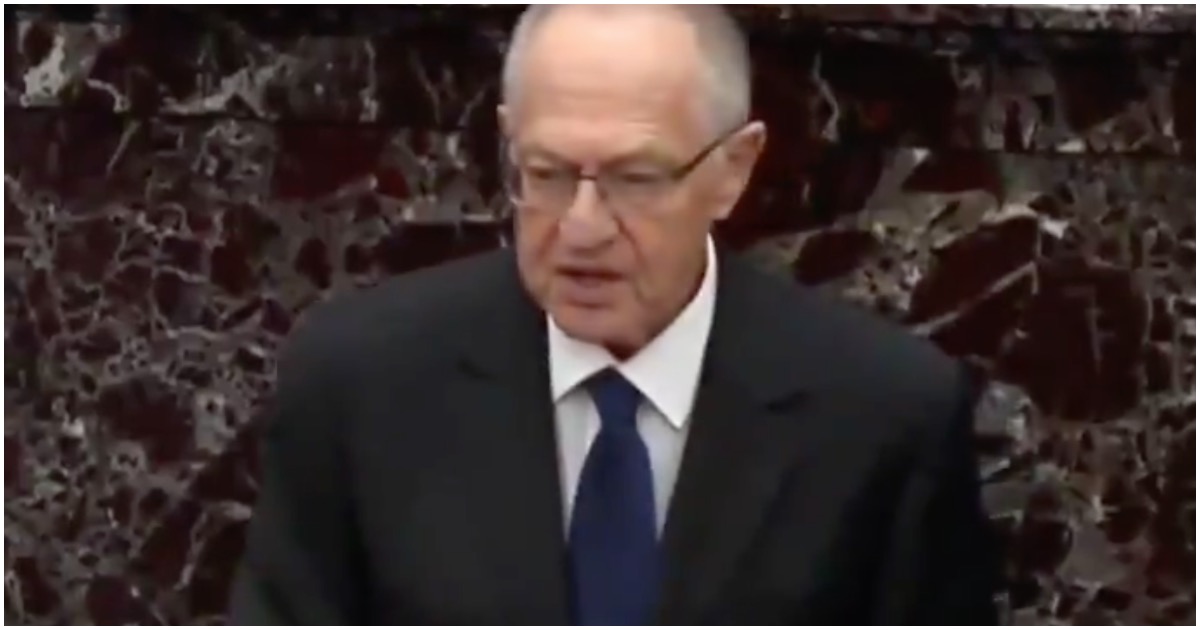 A member of Alan Dershowitz’s own family told him to change his last name because he had the audacity to work with President Trump’s legal team. That’s how ridiculously political everything has become these days.

Whoever that family member was, he or she won’t be happy to hear what Dershowitz just said about former National Security Adviser John Bolton’s new book, which apparently says Trump intentionally withheld aid to Ukraine. From The Hill:

“If any president had done what the [New York] Times reported about the content of the Bolton manuscript, that would not constitute an impeachable offense,” Dershowitz said during lengthy remarks from the Senate floor Monday night.

Dershowitz noted, “Let me repeat: Nothing in the Bolton revelations, even if true, would rise to the level of an abuse of power or an impeachable offense. That is clear from the history. That Is clear from the language of the Constitution.”

He added, “You cannot turn conduct that is not impeachable into impeachable conduct simply by using words like ‘quid pro quo’ and ‘personal benefit.’”

Both of Democrats’ impeachment articles are “standard-less” and totally rely on partisan interpretation. pic.twitter.com/VLJbXVbuEL

Alan Dershowitz: "I would be making the very same Constitutional argument had Hillary Clinton, for whom I voted, been elected and had a Republican House voted to impeach her on these un-Constitutional grounds." pic.twitter.com/Novr5q74e3

New Stmt from House Impeachment Managers: “There can be no doubt now that Mr. Bolton directly contradicts the heart of the President’s defense and therefore must be called as a witness at the impeachment trial of President Trump.” pic.twitter.com/nVJ9B0xl9U

WORTH NOTING: The House managers in their statement tonight requested not just Bolton but his "notes" and other docs.

Bolton was a notoriously prolific note-taker and would likely have documented his interactions with the president (particularly if they're now in a book draft.)

BOLTON's lawyer seems to confirm the accuracy of the Times story: https://t.co/74oTiVuYVV

#BREAKING (4) Bolton’s team is not denying that his book manuscript says President Trump was planning to freeze aid to #Ukraine until their govt agreed to announce they were launching an investigation into the Bidens.

SCOOP: Bolton book draft, circulated to associates and sent to WH for review process, describes a convo w POTUS where he says he doesn't want to release withheld aid till Ukraine turned over material related to investigations @nytmike and me https://t.co/N3Tsce4gR7

Bolton claims in drafts of manuscript that Pompeo privately told him that there was no basis to what Giuliani said about Yovanovitch and that he questioned whether she was going after his other clients in her corruption crackdown https://t.co/N3Tsce4gR7

Bolton claims Mulvaney was present for at least one meeting Trump had by phone with Giuliani where Giuliani was talking about why Yovanovitch should be fired https://t.co/N3Tsce4gR7

Bolton writes that he told White House lawyers he was worried about Giuliani leveraging his Trump relationship for other clients https://t.co/N3Tsce4gR7

Bolton's motivations for testimony – he has a story he wants to tell, and he is concerned he'll be accused of holding stuff back to juice his book sales instead of speaking out https://t.co/N3Tsce4gR7

The revelations directly contradict Trump's claim that he never tied the hold-up of Ukrainian aid to his demands for investigations into his political opponent Joe Biden. https://t.co/7FCQknNtLy

WH probably out of luck on executive privilege if Bolton gets a subpoena for documents/info and immediately turns over a draft of his book before Trump can object/litigate. (Again, House Intel can issue him a subpoena.)

If John Bolton does not believe his conversations with the president are covered by any privilege claims, there is nothing stopping him from telling his story immediately, with or without Senate action. Op-ed, Medium post, something…

New from John Bolton aide Sarah Tinsley: “Several weeks ago, the ambassador sent a hard copy of his draft manuscript to the White House for prepublication review by the National Security Council. The ambassador has not passed that manuscript to anyone else for review. Period.”

If all the democrats were with the knowledge and integrity of Prof. Dershowitz it’s likely that America wouldn’t have such great need of a President Trump, but most dem politicians are so corrupt and dishonest that we do need Trump in charge to bring America back from the edge of disaster. The disaster looming from the past 8 terrible years of obama.