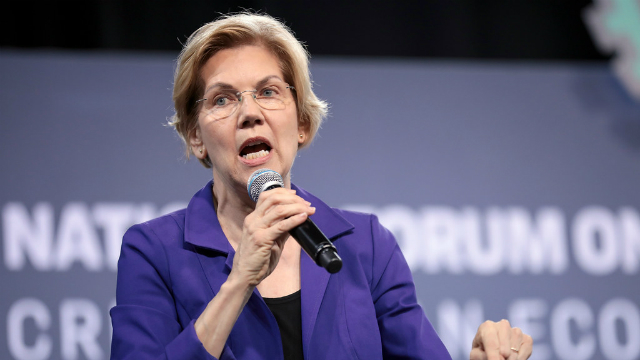 The following article, Elizabeth Warren Not Interested In Getting Involved In Sanders-Clinton Feud, Says ‘I’m Not Going There’, was first published on Flag And Cross.

Sen. Elizabeth Warren has fallen behind both Joe Biden and Bernie Sanders in the polls, which is not a great sign this close to the Iowa caucuses, but at the end of the day, it’s still anyone’s game.

With the primary so close, many in the Democratic Party have turned on each other and gone after one another in verbal jousting and mudslinging attacks, chief among them Warren and Sanders, with Warren accusing Sanders of saying he didn’t believe a woman could be president.

While the smoke is just starting to clear on that a bit, the feud between Bernie and former Democratic presidential nominee Hillary Clinton is still alive, and Warren is refusing to get involved in the fray.

Clinton, 72, in an interview published this week by the Hollywood Reporter, blasted the Vermont senator, her former 2016 Democratic primary opponent, as “a career politician,” saying she felt “so bad” that “people got sucked into” him.

“He was in Congress for years. He had one senator support him. Nobody likes him, nobody wants to work with him, he got nothing done,” the former secretary of state told the outlet.

“Bernie and I have worked together for a very long time, and we continue to do so. I’ve said all I’m going to say about this,” Warren said before turning to the topic of impeachment.

Warren has obviously realized that her attacks against Bernie backfired on her in a big way so now she’s trying to avoid getting pulled into another battle that could potentially hurt her chances of nabbing the party’s nomination.

It’s political maneuvering at its finest.

Continue reading: Elizabeth Warren Not Interested In Getting Involved In Sanders-Clinton Feud, Says ‘I’m Not Going There’ ...