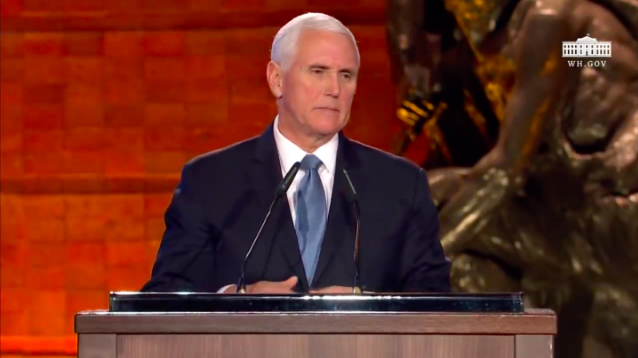 The following article, VP Mike Pence Urges World Leaders To Stand Against Iran And Confront Anti-Semitism On Global Scale, was first published on Flag And Cross.

Anti-Semitism has been enjoying a disturbing comeback in modern day society as of late, thanks in large part to the anti-Israel sentiment being spread by folks in powerful cultural and governmental positions.

The increase of attacks against Jews has even turned deadly with many becoming the victims of deadly shootings and hate crimes in New York City and elsewhere.

In light of this, Vice President Mike Pence has urged global leaders to take on anti-Semitism and stand against the Israel hating nation of Iran.

Here’s more on that from The Washington Examiner:

Speaking in Jerusalem at the World Holocaust Remembrance Center to commemorate the 75th anniversary of the liberation of Auschwitz on Thursday, Pence said the stories and legacy of those killed in the Holocaust must not be forgotten.

“We gather to fulfill the solemn obligation, an obligation of remembrance, to never allow the memory of those who died in the Holocaust to be forgotten by anyone anywhere in the world,” he said. “Today, we remember what happens when the powerless cry for help and the powerful refuse to answer.”

The vice president went on to pay homage to the survivors of the Holocaust “who all these years have borne witness to that evil and have served mankind by their example.” He also drew upon the legacy of those who fought against Nazism and anti-Semitism during World War II.

Leaders from more than 40 nations attended the speech, which Pence took as an opportunity to encourage them to stand against the Iranian regime, calling it “the leading state purveyor of anti-Semitism.”

“The world must stand strong against the Islamic Republic of Iran,” Pence said as the audience applauded.