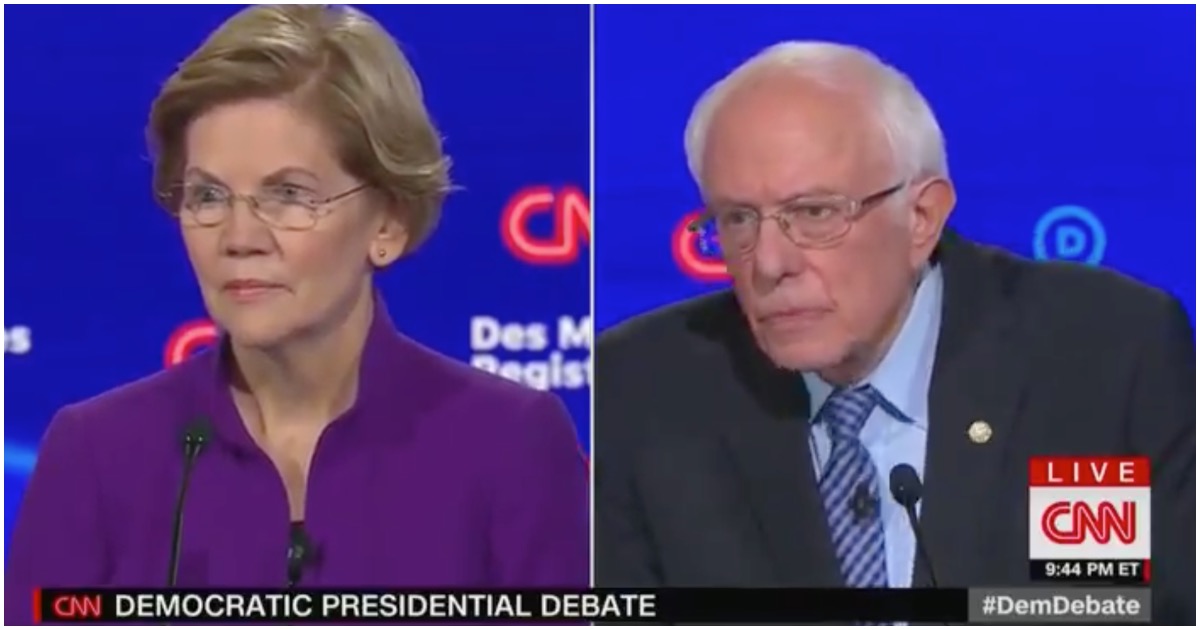 The following article, ‘I Think You Called Me A Liar’ — Audio Released of Bernie, Warren Interaction After Dem Debate, was first published on Flag And Cross.

If you saw Tuesday’s Democrat debate, you probably noticed a slight catfight at the very end between socialists Elizabeth Warren and Bernie Sanders. But who are we kidding? You probably didn’t tune in. Don’t worry. I got you. Here’s what went down. From Daily Wire:

On Wednesday, CNN released the audio from a confrontation that took place after Tuesday night’s Democrat presidential debate between Elizabeth Warren and Bernie Sanders, in which both candidates accused each other of making false statements.

Here’s what was said…

CNN has audio of the post-#DemocraticDebate exchange between Sens. Bernie Sanders and Elizabeth Warren (https://t.co/qcQzrpCK54): pic.twitter.com/XguPLModFh

CNN has just published the audio of the tense conversation between Bernie Sanders and Elizabeth Warren after yesterday's debate pic.twitter.com/EUdIyIkroW

Warren, who has been asked repeatedly how she plans to pay for something like Medicare for All, and each time the question comes up, it seems as if she can’t give a solid answer.

Warren recently dismissed the idea that her ability to provide funding for the massive expansion of federal programs she wants to make law will be hindered by finite amounts of cash available.

Warren made the comments during an interview in November with Lily Eskelsen Garcia, president of the National Education Association. Garcia had asked Warren about increasing funding for Title I of the Elementary and Secondary Education Act and the Individuals With Disabilities Education Act, and how that might be paid for.

Most of the other Democratic candidates running for president have come out and criticized Warren for not being totally honest about where the money for her programs is going to come from.

Warren has waved off these criticisms, saying they are just rehashing Republican talking points.

Continue reading: ‘I Think You Called Me A Liar’ — Audio Released of Bernie, Warren Interaction After Dem Debate ...

Well, yeah! Old bernie wasn’t lying is he called old lizzy a liar, as she is a known liar.