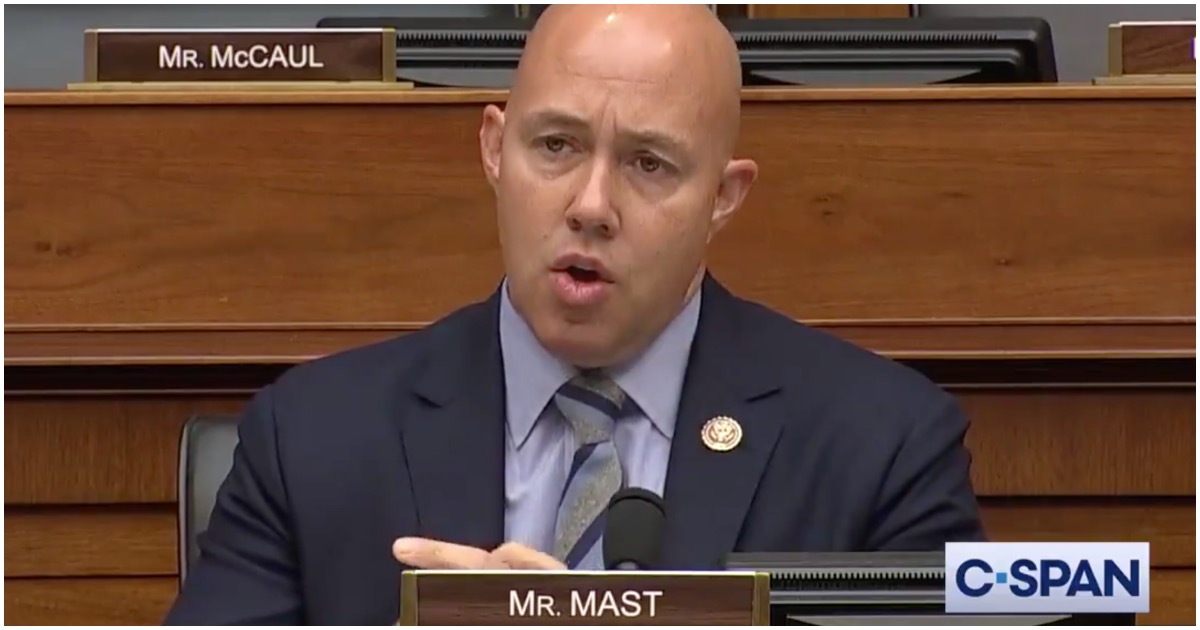 Florida Republican Brian Mast served for over a decade in the United States military. The man knows a thing or two about taking out an enemy when he sees one.

On Tuesday evening, Mast asked a poignant question that no Democrat could answer. And it was glorious.

.@RepBrianMast asks for name of fallen service member that doesn't justify Soleimani killing: "I will sit here and wait…"

.@RepEliotEngel: "Thank you, Mr. Mast, I think you've made you're point…"

Rep. Mast: "Mr. Chairman, I have not yielded back my time." pic.twitter.com/V5dagi54QD

Abu Bakr al-Baghdadi was considered the number one terrorist in the world. President Trump gave the order to take him out, which lead to the rise of hero canine, Conan.

With Abu out of the way, Iranian terrorist Qasem Soleimani took over the top spot. What an honor!

Not one to be a reactionary leader ala Barack Obama, Trump saw an opening to get Soleimani and took advantage of the opportunity.

Even though Soleimani was both directly and indirectly responsible for thousands upon thousands of deaths, possibly even millions, Democrats continue to fight POTUS every step of the way.

Dems are literally outraged that Trump did what he did to rid the world of a monster in order to keep innocent men, women, and children alive. Something to think about.

Here’s a fact about Soleimani you probably didn’t know, via New York Post, via 2014, with Solemani’s name spelled differently:

Suleymani has orchestrated attacks in everywhere from Lebanon to Thailand. The US Department of Justice accuses him of trying to hire a Mexican drug cartel to blow up the Saudi Ambassador to the United States while he was in Washington, DC.

My sources, meanwhile, say Suleymani was involved in an even more direct attack on the US — the killing of Ambassador Christopher Stevens in Benghazi, Libya.

“In Libya, Iran wanted to block US influence, which they saw as a threat,” the intelligence chief said. “They saw the uprising against Khadafy — and the Arab Spring more generally — as an opportunity to accomplish this.”

American leaders’ highest priority is to protect American lives and interests. But we cannot put the lives of American servicemembers, diplomats and others further at risk by engaging in provocative and disproportionate actions.

American leaders’ highest priority is to protect American lives and interests. But we cannot put the lives of American servicemembers, diplomats and others further at risk by engaging in provocative and disproportionate actions. https://t.co/o0R8YVJMNW

Statement from the State Department…

State Department: “We can confirm that in the past several days, General Soleimani had been traveling in the Middle East coordinating further imminent large-scale attacks against U.S. diplomats and service members. These threats were highly credible and the intelligence is sound”

So what if Trump wants war, knows this leads to war and needs the distraction?

Real question is, will those with congressional authority step in and stop him? I know I will. https://t.co/Fj9TMossEW

Last night the President engaged in what is widely being recognized as an act of war against Iran, one that now risks the lives of millions of innocent people.

Now is the moment to prevent war & protect innocent people – the question for many is how, publicly & Congressionally:

Right now is the moment to decide if you are pro-peace or not.

The cheerleaders of war, removed from its true cost, will gladly convince you that up is down – just as they did in Iraq in ‘03.

But war does not establish peace.
War does not create security.
War endangers us all.

War advocates start off saying “we all want peace, but…” or “it’s too late…” & frame a pro-peace agenda as naïve to realpolitik.

Don’t give into this gaslighting. The same folks selling us Iraq and selling us this latest provocation of violence. We cannot repeat this cycle.

Congress now has a moral and legal obligation to reassert its power to stop this war and protect innocent people from horrific consequences.

We have two immediate options:

1. Vote on a War Powers Resolution, which requires Trump to attain Congressional approval.

This amendment passed the House w/ bipartisan support not long ago, and was later gutted in negotiations. We can bring it back as a standalone bill.

Team Obama overthrew Qaddafi, failed to protect our Benghazi embassy, lied about it, and withdrew. Then they tried to bribe the Iranian terrorist regime without any strings attached. Now they have advice after Trump defended the Baghdad embassy and killed Soleimani. No.

Any time the American military can take out a terrorist anywhere in the world, it should be done. Any dem/liberal that isn’t okay with this is free to leave and go join your friends in Iran or wherever.