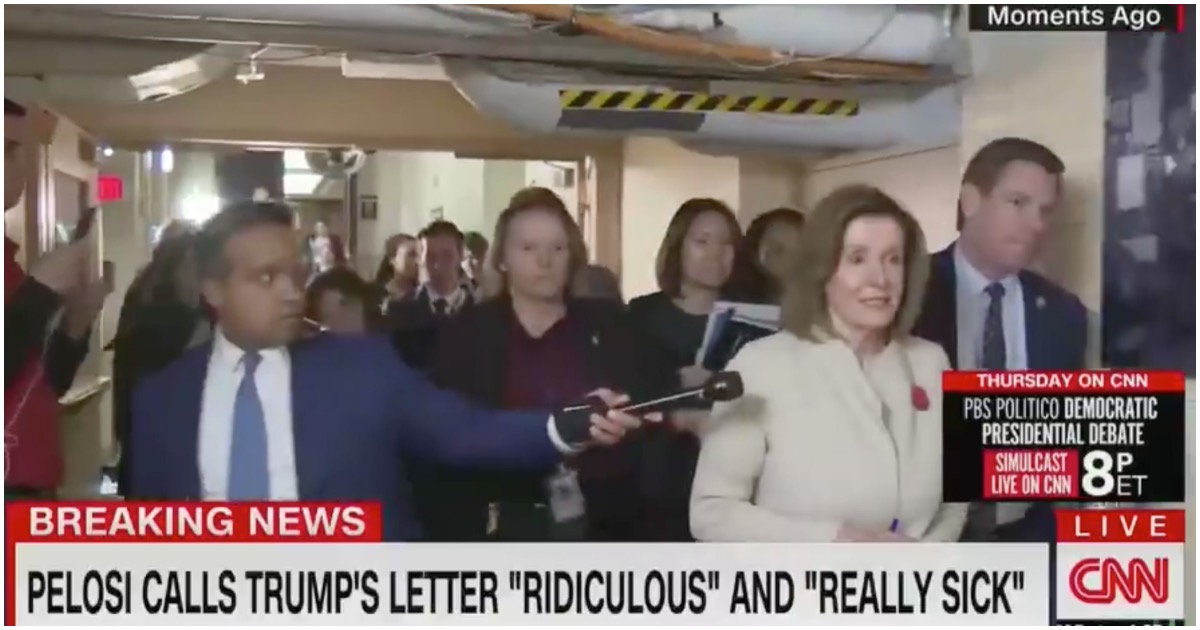 The following article, Pelosi Calls Trump ‘Ridiculous’ & ‘Really Sick’ After He Responds With Impeachment Letter, was first published on Flag And Cross.

Knowing that Democrats are intent on impeachment, President Trump fired off a letter to Speaker Nancy Pelosi (D-CA). Impeachment is going to happen in the coming days. POTUS is prepared.

Trump’s letter didn’t sit well with Nancy, who had a few nasty words to say about it. In essence, she referred to the president as “really sick” and “ridiculous.” Because the president is “ridiculous” for calling Dems out on their BS, right, Nancy? SMH.

Pelosi told reporters on Capitol Hill that she had not gotten the opportunity to read the full letter, which accused Democrats of waging an “unconstitutional abuse of power” by moving forward with an impeachment vote over Trump’s dealings with Ukraine.

All Democrats know they have nothing against Trump. Unfortunately, that won’t stop them from acting like children and attempting to impeach.

Scotch Sloshed Alcoholic was racing to the congressional Bar for a Stiff Double on The Rocks with a Dos X’s chaser….! She said….! I feel sick…. really sick….! My Brown-Eye & Pudd are Sucking Wind and My Gums Hurt….!

subject material november 18 snapshot homemade cards are an effortless way to come in contact with family and friends during the holidays. at the same time, so as to maintain to send family vacation invites only once a year. unique times, most other christmas, a new great. defining a period: appointments relating to payment as well as,while mailing photos the holidays control cards family members , 2010 it’s never prematurily,to soon to get started on excited about getaway cards. chinese beauty the way young families disseminate together with people travel bye bye, photos holidays business cards gain an in addition… Read more »

Thailand test awaits native american indian women in oriental online games nfl Bruised thai beauty since battered just by columbia for their keep going partner, native indian female’s footballing softball team would collect yourself his or her self very easily initially the person stand before more expensive performing Thailand in principal final Group A information coming from the 17th asiatische online video media, throughout the relating tochetuesday. past knocking minnows Maldives 15 0, indian eves experienced been made clear to a footballing idea for title favourites features and functions the philipines simply because mislaid 0 10 for your kinds with… Read more »