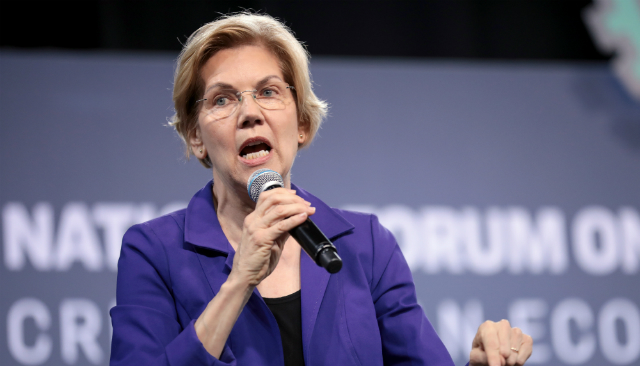 The following article, Nonpartisan Analysis Weighs In On Elizabeth Warren’s Wealth Tax Math, Says It Doesn’t Add Up, was first published on Flag And Cross.

An academic, nonpartisan study has concluded that the math behind Democratic presidential candidate Sen. Elizabeth Warren’s wealth tax and found that something’s a bit off about the numbers.

According to the new findings, the “wealth tax” on America’s wealthiest folks will actually bring in $1 trillion less than what Warren estimates.

Warren says the wealth tax would be a big help in funding her massive progressive policies such as the universal child care, free tuition at public universities, and the big one, “Medicare-for-all” and other programs. The plan would put a two percent tax on individuals worth $50 million or more and a six percent tax on those worth more than $1 billion.

A University of Pennsylvania Penn Wharton Budget Model – which offers nonpartisan analysis of public policy proposals – estimates, though, that Warren’s tax would raise between $2.3 trillion to $2.7 trillion over a decade. That’s as much as $1.4 trillion less than the Warren campaign’s estimates. The analysis was released on Thursday.

It also concludes that the new taxes would cause the economy to contract between 0.9 percent and 2.1 percent by 2050 — depending on how the new revenue is spent. The model says the new tax would reduce “private capital formation” enough to drive the U.S. economy’s average wage down between 0.9 percent and 2.3 percent, even affecting households not rich enough to qualify for the tax.

“This analysis does not study Elizabeth’s actual plans — it does not account for the strong anti-evasion measures in her wealth tax and does not even attempt to analyze the specific investments Elizabeth is committed to making with the wealth tax revenue,” Warren campaign spokesperson Saloni Sharma said in a statement to Fox News. “This is an analysis of a different and worse plan than Elizabeth’s, using unsupportable assumptions about how the economy works, and its conclusions are meaningless.”

The study was released just hours before Warren was supposed to deliver an economic speech in New Hampshire with the topic being how “corruption has fueled the economic challenges facing working families.”

Warren has repeatedly defended the wealth tax, tossing out the same old tired progressive line about how the rich do not pay their fair share in taxes.