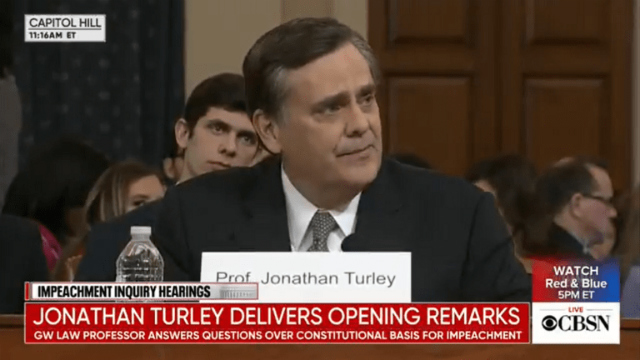 The following article, Trump-Critic Impeachment Witness Tells Democrats They Don’t Have Enough Evidence To Impeach, was first published on Flag And Cross.

Law professor Jonathan Turley has not at all been shy of offering President Trump a rather large dose of criticism over his time in the Oval Office, but he issued a rather strong warning to the House Judiciary Committee on the first day of impeachment hearings that they probably did not want to hear.

According to the George Washington University professor of law, Democrats do not have enough evidence to legitimately impeach the president.

Check out the details from The Daily Wire:

The impeachment “is not wrong because President Trump is right,” says Turley in his 53-page opening statement. While Trump’s famous call with Ukrainian President Volodymyr Zelensky was “anything but perfect,” Turley argues, and a case for impeachment “could be made,” “it cannot be made on this record,” as all of the evidence has been second-hand at best.

After explaining that he’s been “highly critical of President Trump, his policies, and his rhetoric, in dozens of columns,” and voted against him in the 2016 election — and for both Bill Clinton and Barack Obama before that — Turley makes the case that what the Democrats are doing by pushing forward with the partisan impeachment of Trump is actually “dangerous”:

I would like to start, perhaps incongruously, with a statement of three irrelevant facts. First, I am not a supporter of President Trump. I voted against him in 2016 and I have previously voted for Presidents Clinton and Obama. Second, I have been highly critical of President Trump, his policies, and his rhetoric, in dozens of columns. Third, I have repeatedly criticized his raising of the investigation of the Hunter Biden matter with the Ukrainian president. These points are not meant to curry favor or approval. Rather they are meant to drive home a simple point: one can oppose President Trump’s policies or actions but still conclude that the current legal case for impeachment is not just woefully inadequate, but in some respects, dangerous, as the basis for the impeachment of an American president.

To put it simply, I hold no brief for President Trump. My personal and political views of President Trump, however, are irrelevant to my impeachment testimony, as they should be to your impeachment vote. Today, my only concern is the integrity and coherence of the constitutional standard and process of impeachment. President Trump will not be our last president and what we leave in the wake of this scandal will shape our democracy for generations to come. I am concerned about lowering impeachment standards to fit a paucity of evidence and an abundance of anger. If the House proceeds solely on the Ukrainian allegations, this impeachment would stand out among modern impeachments as the shortest proceeding, with the thinnest evidentiary record, and the narrowest grounds ever used to impeach a president.7 That does not bode well for future presidents who are working in a country often sharply and, at times, bitterly divided.

If the Democrats fail to prove Trump committed impeachable offenses in his phone call with Ukraine, the whole strategy they’ve employed here could end up backfiring on them in a rather massive way, convincing many independents and undecided voters to jump over to supporting the president.

At this point, it doesn’t seem any of that matters to Democrats, so we’ll have to wait and see if they receive any blowback from their current course of action.