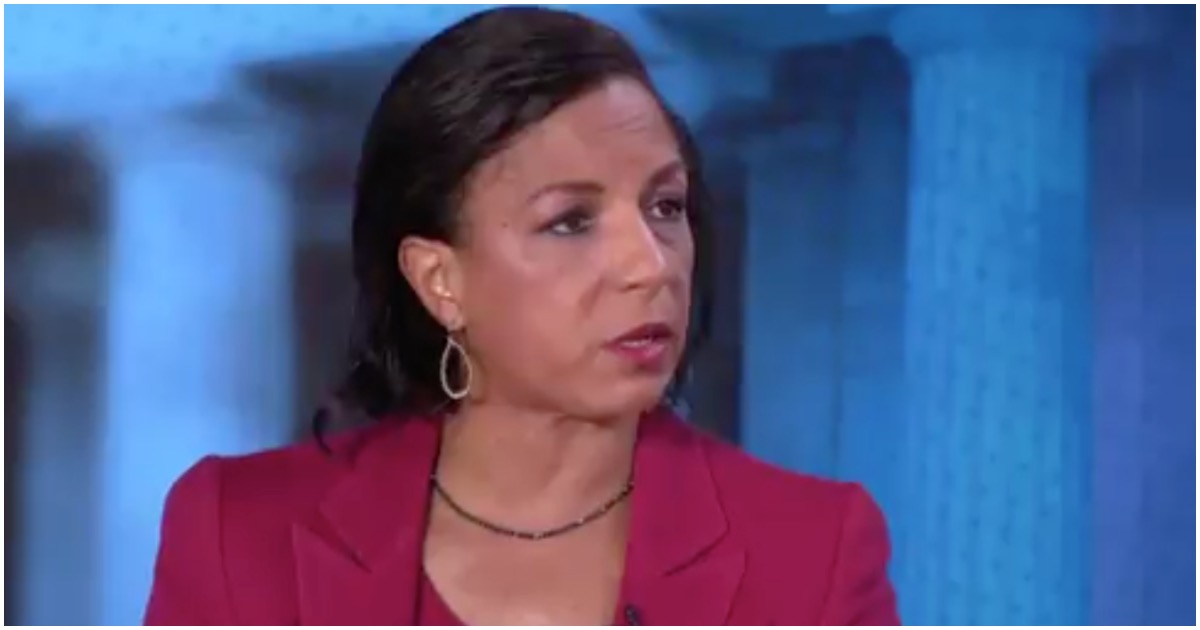 The following article, Susan Rice Is Upset That Trump Didn’t Call Obama About Raid On ISIS Leader al-Baghdadi, was first published on Flag And Cross.

Remember Susan Rice? She was the Obama administration lackey tasked with initially lying to the nation about Benghazi. Sure, she’s had numerous other gaffes over the years. That’s just one that sticks out like a sore thumb.

On Sunday, Rice explained how she was upset that President Trump didn’t tell Obama about the impending raid on ISIS leader, Abu Bakr who-Gives-A-Damn-he-dead-Now. Because that makes sense, right? For POTUS to call his predecessor and say hey, we’re going in – you cool with it?

I’m sure Obama did stuff like that for Bush allllll the time. Good one, Susan. Didn’t Bill Clinton once say he was perplexed that 44 never called and asked him for advice? Pretty sure that happened.

She whined, “Well obviously it’s a major milestone and it’s one that we all should be welcoming quite plainly, but it doesn’t mean that the fight against ISIS is over. And it doesn’t mean that we can declare mission accomplished, and just walk away. What we’ve seen time and time again in this part of the world is that when the pressure is relieved on terrorist organizations, whether al-Qaeda or ISIS, they are able to reconstitute. So we need to be vigilant. We need to maintain a minimal presence in order to ensure that the pressure stays on ISIS and they don’t come back roaring.”

Brennan then asked Rice, “Do you know, was President Obama informed of the death of al-Baghdadi by the administration?”

She responded, “There’s no reason why I should know. There is a tradition of common courtesy of presidents informing their predecessors of things of significance like this. Since the White House seemingly didn’t feel it necessary to inform the leadership of the intelligence committees on a bipartisan basis, I’m quite confident that they didn’t do the normal protocol with respect to predecessors either.”

.@AmbassadorRice on @realDonaldTrump ‘s announcement that Abu Bakr al-Baghdadi was killed in a raid conducted by U.S. special forces: “it doesn’t mean the fight against ISIS is over.”

Why would he warn the ENEMY

Guest
THEY ARE ALL A BUNCH OF LEAKER'S!

Susan Rice? The reason President Trump did NOT inform Ex-President Obama? Was probably the same reason he did NOT inform Nancy Pelosi? ….LEAKING…. He could not put out troops in jeopardy. SORRY SUSAN assistant to the Trader-In-Chief? … Didn’t EX-President Obama let Baghdadi out of Prison in 2009? Yes, he sure did. Yep, I can see exactly why NONE OF THEM WERE INFORMED. … THey are a Bunch of LEAKER’S! ……..Ohhhh, is it 2020 YET? … WOW, American needs to do a ton of Re-Hiring! OUT WITH THE DIM’S and in with the PUBS!

Guess she forgot Obama is not president anymore. Another form of mental illness

Obama freed him and helped form ISIS why would you let their leader warn him.