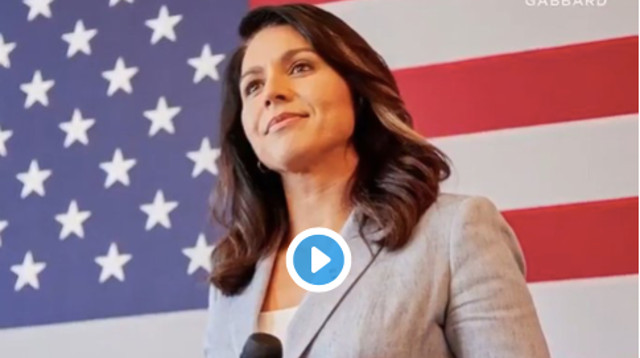 The following article, VIDEO: Tulsi Gabbard Won’t Be Seeking Reelection To Congress, was first published on Flag And Cross.

Rep. Tulsi Gabbard announced on Thursday that she will not be seeking reelection to her congressional seat, opting instead to focus on her presidential campaign.

The Daily Wire has more details:

“Today I’m officially announcing that I will not be seeking reelection to Congress in 2020. Throughout my life, I’ve always made my decisions based on where I felt I could do the most good,” Gabbard said in a series of tweets. “In light of the challenges we face, I believe I can best serve the people of Hawai’i [and] our country as President and Commander-in-Chief.”

Gabbard was first elected to serve as the representative to Hawaii’s 2nd Congressional District in 2012 after winning more than 80% of the vote. She was the first Samoan-American and first Hindu member of Congress, and has since held the seat for three more terms.

Today I’m officially announcing that I will not be seeking reelection to Congress in 2020. Throughout my life, I’ve always made my decisions based on where I felt I could do the most good. In light of the challenges we face, I believe I can … pic.twitter.com/F0StYoA66n

The Hawaiian continued on in the video saying, “As president, I will immediately begin work to end the new cold war [and] nuclear arms race, end our interventionist foreign policy of trying being the world’s police, toppling dictators and governments we don’t like, but instead redirect our precious resources towards serving the needs of the people here at home. I humbly ask for your support for my candidacy for President of the United States.”

Clinton suggested that Gabbard was a Russian asset being groomed to run as a third-party candidate. The comments received some pretty harsh backlash, particularly from Gabbard herself who went on the offensive against Clinton, referring to her as the “queen of warmongers, embodiment of corruption, and personification of the rot that has sickened the Democratic Party.”

Ms Tulsi will not become the dem’s candidate as she doesn’t come across as bat-shit crazy enough to qualify as a democrat. Although she seems to have a leaning to liberalism she is apparently not far enough to satisfy the far left now dominating that political party.