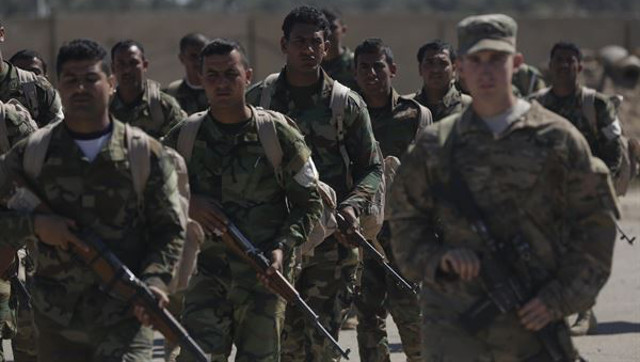 The following article, U.S. Troops Pulled From Syria Will Go To Iraq To Continue Fight Against ISIS, was first published on Flag And Cross.

U.S. troops being pulled from Syria aren’t coming home after all, being relocated instead to western Iraq where they will continue to be involved in the battle against radical Islamic terrorist group ISIS. Troops may also continue to fight against the group in Syria also.

Defense Secretary Mark Esper revealed the plans for the troops being yanked from Syria where they were helping Kurdish forces and are now experiencing a very hostile, aggressive military push by Turkey.

Here is more information from TheBlaze:

“One is to help defend Iraq and two is to perform a counter-ISIS mission as we sort through the next steps,” Esper said of the plans for troops stationed in Iraq. “Things could change between now and whenever we complete the withdrawal, but that’s the game plan right now.”

President Donald Trump ordered the withdrawal of about 1,000 troops from Syria. Some are still in northeast Syria defending oil fields from a Islamic State takeover and have not yet begun to withdraw. Several hundred will remain in southern Syria at the Al-Tanf outpost.

So when will the withdrawn U.S. troops return home? According to White House chief of staff Mick Mulvaney, “eventually.”

“The quickest way to get them out of danger was to get them into Iraq,” Mulvaney told Fox News on Sunday.

As a result, a move that was presented as an opportunity to bring U.S. soldiers out of the volatile Middle East and back home has become more of a strategic repositioning, especially if the troops do indeed continue conducting missions in Syria from Iraq.

It also appears that there’s some sort of potential issue with the messaging coming from the Trump administration over this whole withdrawal. President Trump tweeted this quote from Esper saying, “The ceasefire is holding up very nicely. There are some minor skirmishes that have ended quickly. New areas being resettled with Kurds. U.S. soldiers are not in combat or ceasefire zone. We have secured the Oil.”

But that’s not what Reuters reporter Idrees Ali, who is traveling with Esper in Afghanistan says. According to the journalist, Esper never said any of that.

I’m not sure who Trump is referring to, but I’m traveling with Defense Secretary Esper and cant recall the quote Trump is using,” the tweet said. “While speaking with us Enroute to Afghanistan, Esper also made no mention of new areas being resettled with Kurds or oil.”

Continue reading: U.S. Troops Pulled From Syria Will Go To Iraq To Continue Fight Against ISIS ...